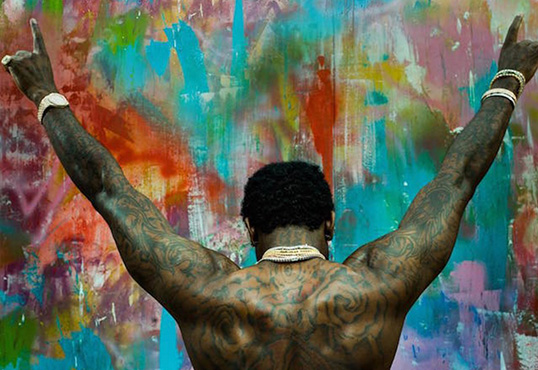 Everybody Looking has arrived.

The full-length album is the first from Gucci since his early release from prison in May and his confidence around the project has been sky-high. He called it “Album Of The Year” on Instagram recently, and collaborator Mike WiLL Made-It echoed the praise, describing it as the best he’s heard since 50 Cent’s Get Rich Or Die Tryin.

Gucci’s been generous with verses ahead of the official release, starting with “First Day Out Tha Feds” just after gaining his freedom and then following it up with “Waybach,” “Back On Road,” “No Sleep,” “Pussy Print,” and a slew of guest appearances for the likes of Kanye West and Migos.

Check out the full stream below, via Spotify.

[This article has been updated with new information. The following content first appeared on July 6, 2016.]

The July 22 release will feature Gucci’s leadoff singles “1st Day Out Tha Feds” and “All My Children” as well as guest spots from Kanye West and Young Thug, according to a tracklist posted on Amazon. [UPDATE: The tracklist has now been scrubbed from the post.] Also listed is Gucci’s “Back On Road,” a song that featured a collaboration with Drake when it was first released, although the 6ix God isn’t explicitly named in the credits of the new album.

Production on the album, which was recorded over a six-day period shortly after Gucci’s release from prison, comes courtesy of Mike WiLL Made-It, Zaytoven and Drumma Boy.

Gucci is also scheduled to play his first major show since becoming a free man on July 22, at Fox Theatre in Atlanta. He is billed to perform with some surprise guests, and with the company he’s been keeping lately, it’s safe to expect an all-star cast.

In a clip posted to Instagram last week, Guwop thanked his fans for their continued support and said the upcoming release is “a hell of a album.”

Check out the now-deleted tracklist below.

[This article has been updated with new information. The following content first appeared on June 25, 2016.]

We’ve all seen the videos of Gucci Mane back in the lab. We’ve all heard “First Day Out Tha Feds,” the song he released the day after his release from prison. Now, we all know the release date and title of Guwop’s first album as a free man.

“This what ya’ll been askin for,” Gucci Mane says on Instagram. “So here it come “Everybody Looking” JULY 22!”

In preparation for Everybody Looking, the Atlanta legend was recently pictured with Drake and Young Thug. After his release from prison, Guwop quickly got back in the studio with his day one producer, Zaytoven, who expressed nothing but excitement at Gucci Mane getting back to work. He told HipHopDX that his friend didn’t skip a beat after being locked away for three years.

“Gucci is a guy that I think that has a sound that has created a way, even if you listen to the music today, it’s all, like 90 percent of it stems from the rap music that Gucci really created maybe 10 years ago,” he said, “so he just got out and got back to business, got back to doing what he do. Just like me, the sound I’ve created and the sound I have I’ve been doing since we’ve started, so there’s nothing that we really had to go and change. Of course we kinda sparked it up a little bit, added a few new things, we started working. But for the most part, he got back to doing what he been doing before he left. He knew how to do that so good, as you can see, he dropped so much music while he was gone, people hardly know he was gone.”

Guwop continued cranking out music from behind bars, including the Meal Ticket mixtape.

Shortly after gaining his freedom, Gucci Mane’s 2009 album The State vs. Radric Davis was certified Gold.

View the cover art for Gucci Mane’s Everybody Lookin below: