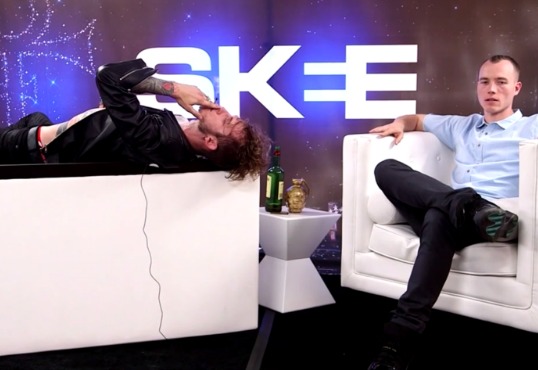 Minneapolis, MN – Machine Gun Kelly graced the SKEE TV couch — broken finger and all — and intentionally inserted himself into any future “greatest hits” reels by flipping said couch upside down and conducting an interview laying on top of it while inhaling a cancer stick.

The Cleveland rap/rock star was discussing his Minnesota State Fair Soundset Festival performance a.k.a. the biggest Hip Hop festival in the Midwest, where he apparently risked it all just to ensure fans were thoroughly entertained.

Footage from YouTube user’s Chris Ashley shows MGK climbing up the stage starting around the 13:30 mark where he gets tangled a bit as he hangs in the balance like a trapeze artist. Like he told DJ Skee, if he likes it, the fans love it.

The interview above is taken from tonight’s episode of SKEE TV where the veteran disc jock ventures back to his Minneapolis hometown for the aforementioned Soundset Festival and even gets the Keys to the City of St. Paul. Elsewhere, he pays a visit to the pro basketball clubs, Timberwolves and the Lynx and even gets a history lesson on the iconic rap label, Rhymesayers (also a product of MN).

Tune into Fuse tonight and every Friday night at 10pm EST/7PM PST to catch the latest SKEE TV episode.

MGK’s full Soundset performance can be seen below.