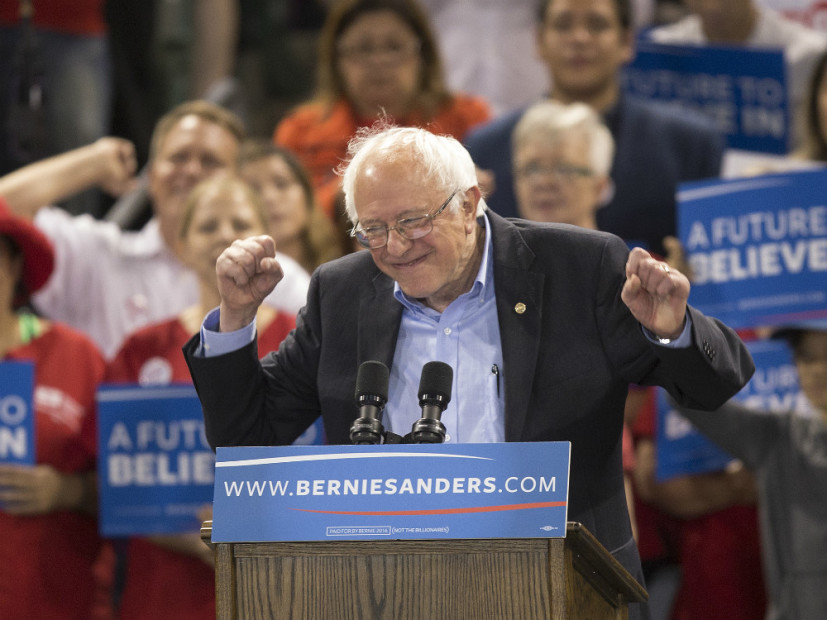 It appears the thought of Bernie Sanders listening to Dark Man X in his spare time was too good to be true.

A few days ago, a video of Sanders triumphantly walking out to DMX’s hit 2003 single, “Where the Hood At?” during a political rally in California went viral but the video’s curator has revealed to Billboard that it was simply a result of computer shenanigans.

Edwin Lacuna released a full statement, blaming the video’s success of people being gullible on the Internet.

“Standing in the crowd waiting for Senator Sanders can lead to daydreaming, and it did just that. It started with thinking how funny it would be if I edited a video to make it seem as if Bernie walked out to DMX, but after waiting a bit longer, I decided I’d turn it into a social experiment.”

“Everyone seems to be very easily fooled by anything they see on the Internet. On one end we have a majority of the Twitter community going crazy and some going as far as even saying they’re ‘switching allegiances’ and ‘I was never going to vote but this just changed my mind’ to some people in the LGBT community saying they knew all along that Bernie Sanders is a ‘gay basher’ and to be honest, if I wanted that to be the message the song would have started completely different. Instead, what we hear is ‘Where the hood at?’ At the end of it all, I wanted to show the world that politics are not something to fool around with and to prove it, I faked this video.”

“Bernie has always made it a point that the youth needs to get more involved in the political process, and as funny as it may be that DMX’s ‘Where the Hood At?’ might have swayed them into doing so, it’s still very disappointing at the same time. I’ve observed each candidate very closely, and regardless of what people may think of Bernie Sanders and their stance politically, there’s no denying he is a man of the people, and there is more than enough evidence to prove that. With all that being said, I hope everyone realizes that we still live in the real world, not the Internet.”

The fake video pleased DMX nonetheless, who told Billboard via email, “When God shows up he shows out.”

It’s looking pretty impossible that the next president will be as Hip Hop savvy as President Barack Obama, who said his favorite song of 2015 was Kendrick Lamar’s “How Much a Dollar Cost” and gave Oval Office advice to presidential hopeful Kanye West.

Democratic hopeful Bernie Sanders flexed a little street knowledge Wednesday (May 25) at a rally in Lancaster, California when he walked out to DMX‘s “Where The Hood At?” a cut from 2003’s Grand Champ.

Although the Ruff Ryders MC has not publicly shared his pick for president, Sanders has gotten support from Lil B, Killer Mike and Rae Sremmurd.

The Senator is running against Hillary Clinton for the Democratic presidential nomination. Whoever wins that will most likely face Donald Trump, who leads the polls in the Republican party.

Watch the video of Bernie Sanders walking out to DMX’s “Where The Hood At?” Below: