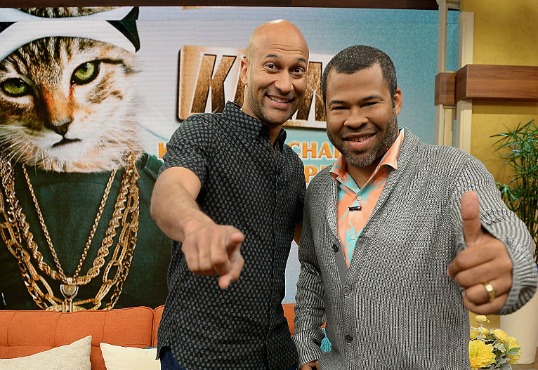 Beverly Hills, CA – Key & Peele have set themselves up for an advantageous position of not only being able to create whatever art they damn well please but to also have it resonate with a variation of audiences.

How else do you explain the ridiculousness of making a hood comedy meets Homeward Bound type flick and getting it theaters nationwide? Key & Peele had the vision for their debut film Keanu clear as day and the studio was given the foresight to follow through.

“Ultimately it was New Line Cinema and Warner Bros. who greenlit the film,” Jordan Peele tells HipHopDX during an exclusive interview at the Beverly Hilton Hotel as Keegan-Michael Key noted “we have to give them props for that.”

Peele continued, “I think what they noticed was something was happening with Key & Peele. We had a voice and a style of comedy that only we do. And it had been picking up attention. Obama’s a fan; he gave us shout-outs. But I think more than, ‘lets make this movie about a cat,’ it was this idea of let’s make the Key & Peele film debut. We had constructed in such a way, it’s got Keanu as a mascot. So the identity of the film is actually bigger than Key & Peele so you don’t have to be a fan of ours to notice this movie and be curious as to what it is.”

Moviegoers may head into Keanu this Friday, April 29, without actually being fans of the comedic genius duo who met on the set of MADtv over a decade ago, but one would have to be hiding underneath that ubiquitous rock to be clueless of their existence. Aside from getting mainstream recognition from TIME magazine and the aforementioned co-sign of all co-signs with President Obama, their street-savviness allowed for them to nail Hip Hop culture skits that channeled everything from Outkast to Family Matters, making their fanbase potential limitless.

Which is why the goofy, yet fluid script of Keanu works for a myriad of audiences. Key & Peele, star as Clarence and Rell, respectively, a pair of do-gooding, yet sensible black men who are forced to use what they learned about gangster shit from rap music and movies in order to gain access to the underworld in order to save Rell’s pet kitten, who has been “catnapped” by drug dealer Cheddar (played by Method Man) and his crew of Blips (a portmanteau of the Bloods and Crips). Straight Outta Compton star Jason Mitchell, comedian Tiffany Hadish and industry vets Nia Long and Will Forte all co-star, among a few other surprise cameos. Even with material reserved for particular audiences, Key feels like anyone who takes in the film should be able to absorb its funny.

“Our type of humor is also the type of humor where if you work hard enough on the craft, then I think that any person, whether they’re white or black, know what a Crip or a Blood is,” he explained. “They may not have any experience in it but to put those words together, is the joke. It’s not a ‘black joke’ or ‘white joke’ it’s just a play on words with accessibility to the story.”

Speaking of Method Man, the duo tells us that their Wu-Tang Clan influence growing up helped diversify their content even in the present day.

“What I love about Wu-Tang Clan is their image was ‘scary,’ Peele says before laughing at the notion of dudes with “masks and machetes walking around New York City.”

Key couldn’t agree more, chiming in with “If you talked to the RZA for an half-of-hour, you’d realize he’s more of a nerd than you are. But to be that brilliant, you have to be obsessed with something. He’s a renaissance man! That nigga is Leonardo da Vinci! Because he gives so much unabashedly passion to the things he cares about. That’s what Jordan is saying. You need that dichotomy; that juxtaposition that shows everybody is a nerd of something!”

Once fans cough up hairballs over all the little subtle jokes Keanu has to offer, it will likely prove compelling for the pair to follow along the same trail. But c’mon, we’ve all seen the range displayed in their skits. That isn’t their style.

“We always want to make sure what we do is different and coming from the left-field, Peele says, recalling their Comedy Central days motto: “Never let them pin us down.” A motto that best explains why they just didn’t go with one of their acclaimed sketch characters à la Saturday Night Live.

“Keanu is sort-of this entity that’s symbolic of the footprint for our next movie but we’re going to change it up,” Peele assured.

In the meantime, it’s all about Hip Hop’s most gangsta C.A.T. Even Snoop Lion didn’t want that title.