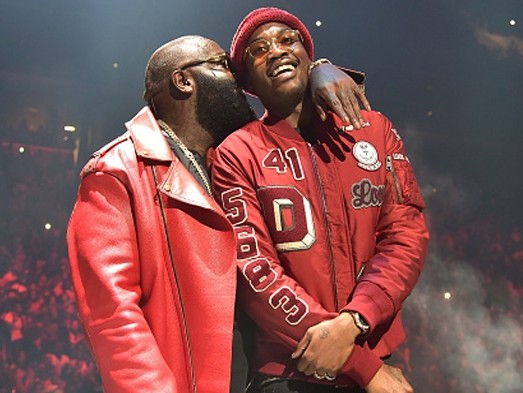 Although Rick Ross has seemingly been mute on all matters concerning the Rap beef between his protege Meek Mill and Drake since it began, the MMG boss belatedly addresses the rivalry while hanging out with Tim Westwood in an exclusive interview.

Although 2015 could be labeled as a tough year for the Dreamchaser emcee as Westwood suggests, Rick Ross has offered a different outlook on the matter.

“A hard year nigga, is getting knocked off getting hit with an AK,” Ricky Rozay says. “Your moms sprinklin’ roses on your casket. That’s a hard year.”

After Meek Milly blasted Drake, thereby challenging his authenticity for using a ghostwriter, the OVO rapper continuously unleashed tracks dissing Meek, including the 2016 Grammy-nominated single, “Back To Back.”

Consequently, Meek Mill became social media’s favorite person to clown and was also sentenced to 90-days house arrest plus six additional years of probation for violating his probation towards the end of last year.

Ross details his own “tough year” stemming from him being placed on house arrest in May 2015 for allegedly pistol-whipping the groundskeeper of his Georgia mansion.

“I had so many of those hard years that it’s a part of my energy,” says the Miami rapper. “So when I am off in one of my 40 homes and I think about those hard years…Next year might be a hard year but as long as we reach our goals, do what we do and keep the team on and give the people what they want, we’re going to enjoy it.”

The full Rick Ross interview with Tim Westwood is as follows: