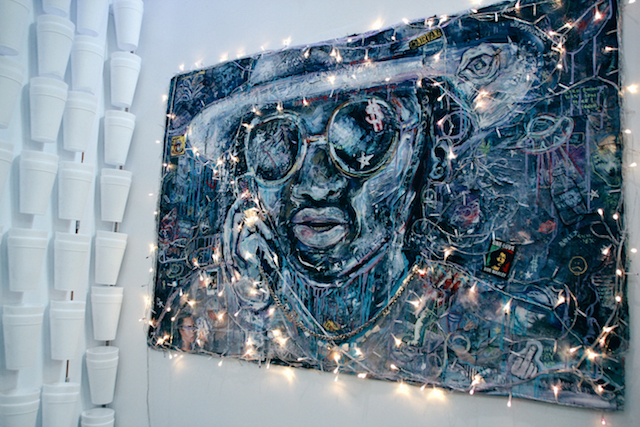 Los Angeles, CA – Friday afternoons on street fashion mecca Fairfax Ave in Los Angeles are often annoying. Traffic sucks and parking availability is even worse. Hypebeast from far and near scour the walls of Supreme, The Hundreds, Diamond Supply and a host of other high-priced brands. For the past several years, the area has had a very specific West Coast vibe that matches the clean boutique aesthetic. Hip Hop remains the location’s sound and skateboarding the unofficial pastime.

No store represented that unity more than The Odd Future Store, which closed early last year. The brainchild of Tyler, The Creator never had aspirations as high fashion, but aimed to serve something for fans was a top priority.

A year later, the space is being occupied for several weeks by Future and the Atlanta-based brand Cease & Desist. The appeal is almost the same as The Odd The Future Store, but, the aspirations seem grander.

Thirty minutes from closing, a security guard at the front double glass door leading into the “Purple Reign” pop-up shop is dealing with mobs of fans coming in and out. Sounds of Atlanta trap staples from Gucci Mane, Young Thug, 2 Chainz and Future Hendrix himself pulsate off a speaker with shirts, hoodies, beanies, pants and jerseys that seem less like fan glorified merch and more acute pieces.

Creative Director for Cease & Desist Fred Foster says that was the point. “The idea is not to base the brand off of Future intentionally,” he says. “We just wanted to create an identity for the brand itself. We wanted the brand to match is aesthetic.”

The union between Cease & Desist and Freebandz go back some four or so years. Being introduced to the Dirty Sprite 2 rapper through his assistant Ebony led to custom pieces for music videos and tours.

Since then, Foster has been able to sit through several significant Future recording sessions for Evol, Honest and host of mixtapes. By then, Cease & Desist had already made a large dent in fashion through their elongated bandana Extendo T-shirts, which found fans in Justin Bieber and Chris Brown, among other stars. Other brands from Forever 21 to Young & Reckless found themselves offering shirts with similar designs.

It’s a name everybody is using for shirts,” Foster says of the line he describes as “Trap Chic.”  “It’s crazy and people don’t even know that.”

For this Freebandz collection, nine pieces were selected out of around 30 designs. According to Foster, the leisurewear is something one could put on at any time that’s stylish. Designers Nxllz and Dbruze assisted with the design of T-shirts inspired by classic rock merch and Pen & Pixel album covers.

“We were able to curate the culture that Future wanted to capture in merch,” Nellz says.

Freebandz wanted to garner attention through more than its merch, though..

“We blasted out a post on Instagram for people to send artwork and we displayed it here,” Foster says. “Our goal was to create a feeling to where if a fan walked in, they felt like they were a part of Future’s brand and I feel like we accomplished that.”

Some notable fan pieces include a representation of the ultra-popular “If Young Metro don’t trust you,” producer tag in the style of Ricky’s murders from John Singleton’s classic film Boyz N The Hood and an oil painting featuring Gucci flip flops. Those who remember Sergio Garcia’s Future tribute from Art Basel in Miami can get an up-close look at the original pieces, as well. Then there are small touches like doubled-up styrofoam cups adorning the bathroom door.

Set to close Sunday (March 20), the Freebandz Clothing collection with Cease & Desist will have another collection for next fall and winter. Of course, Future will continue to give his input, as well.

“If there’s anything he feels strongly opposed to, he’s going to make it known that he doesn’t like it,” Foster says. “Future is very much involved because he appreciates fashion, so he doesn’t want to do it the wrong way.”