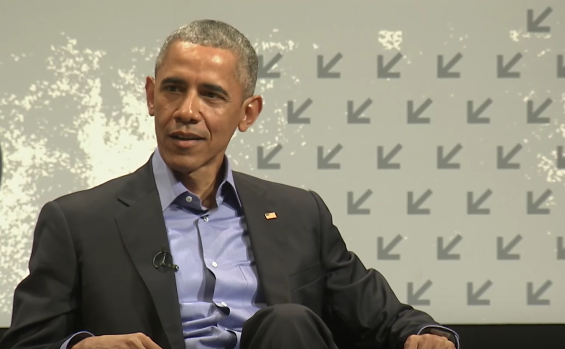 Following his keynote address at SXSW in Austin, Texas on Friday (March 11), President Barack Obama went on to speak at a fundraiser for the Democratic National Committee.

During his speech, Obama confessed his admiration for J. Cole, who had performed at the event.

“I love J. Cole,” Obama said, according to a Twitter post from WorldStarHipHop. “You know, this is the benefit of having teenage daughters. I actually keep up.”

Obama also revealed that he was able to speak with Cole’s mother and grandmother before the event.

During his performance of “Be Free” on the Late Show with David Letterman in December 2014, J. Cole was somewhat critical of Obama’s Presidency.

“No disrespect in terms of change I haven’t seen any / Maybe he had good intentions but was stifled by the system / And was sad to learn he actually couldn’t bring any,” J. Cole rapped.

Throughout his tenure as President, Barack Obama has voiced his appreciation for a variety of Hip Hop artists, Kendrick Lamar being a notable example. During an interview with People last December, Obama named K. Dot’s “How Much A Dollar Cost” from To Pimp A Butterfly as his favorite song of 2015.

Last October, Kendrick Lamar paid a visit to the Oval Office as part of the “Pay It Forward” initiative that promoted mentoring youth across the country.

More recently, Obama was asked his opinion on the potential winner should Kendrick Lamar and Drake ever square off in a Rap battle.

“You gotta go with Kendrick,” President Obama told YouTube star sWooZie. “I’m just saying. I think Drake is an outstanding entertainer, but Kendrick…his lyrics. His last album [To Pimp A Butterfly] was outstanding. Best album I think [that came out] last year.”