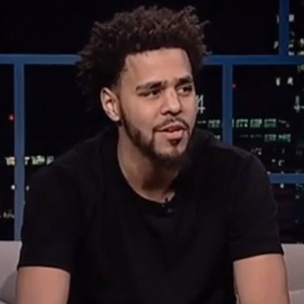 J. Cole confirms that he is married, during #MLKNow event, which took place in New York City yesterday (January 18).

North Carolina lyricist J. Cole appeared to be caught off guard during his appearance at the #MLKNow event when Creed director, Ryan Coogler asked the rapper how he’s been changed by marriage. Cole joked about the unexpected question, jokingly referring to it as “a black history moment.”

“That was like one thing to not do. Nah, I’m just joking. It’s all good. Well they know now. That was cool though. That’s like a black history moment. They’re never gonna forget that,” J. Cole said.

After being asked about married life, J. Cole took time to address the purpose of the #MLKNow event. He explained that while such an event is inspiring, it shows a seemingly never-ending cycle.

Cole later offered his thoughts on how to break the cycle, which he says needs to be broken from within first.

“I got to see the Malcolm speech from Andre, which was crazy,” the rapper said. “And to hear Mr. Belafonte speak and give his speech. And just to see the parallels. And I know that that’s why y’all put this on. To drive the message home, but it’s crazy how those things are—I mean it’s inspiring, but it’s also a little disheartening. It’s a lot of things for me. But it’s crazy how much of that stuff is still—All of it is still so relevant. And I’m curious to know and I would love to talk about it. It’s like, how do we stop it from being in a cycle of like great leaders who have great things to say and who know, but it’s like—And fight so hard to spend they whole lives fighting, but then we—I don’t want to have to do this 50 years from now. And then they quoting you or quoting whoever and it’s the same thing.

“So, it’s like I wonder what we have to do to stop that cycle,” he added. “I have some ideas. It’s not concrete ideas, but I have a feeling…I feel like even before that’s [economic power] possible, it’s like we got to turn our sights from outward at the system, which is totally wrong. Like completely wrong, but we gotta turn our sights from looking outward at the system and how wrong it is to inward. And how we’ve been affected by it. And how we can work every day to clean ourselves. We poisoned, bro.”

Video of J. Cole speaking on his marriage and social justice at the #MLKNow event, can be found below.