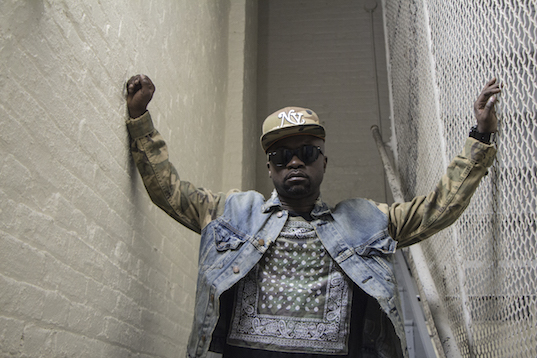 For Havoc, Working On "The Life Of Pablo's" Most Controversial Track Was Just Business

New York City, NY – Rubber bullets from Kanye West’s direction were recently fired towards Taylor Swift on The Life of Pablo’s most talked about track, “Famous.”

The stinging hook: “I feel like me and Taylor [Swift] might still have sex…I made that bitch famous” will forever live in musical registries (Tidal and beyond). While the choice of verbiage may split public opinion of West’s behavior down to the hairline fracture, no one has yet to accuse the record’s production (get the full breakdown here) of being anything less than stellar. Kejuan Muchita, best known by his menacing rap moniker Havoc, was among the song’s handful of studio wizards that pieced in the puzzle.

HipHopDX caught up with the Mobb Deep rep several days after the unceremonious release of The Life of Pablo, to see how his involvement came into play.

Havoc recalls he “just chilling” when Kanye’s management and team reached out for him to make the trip to L.A. and he wasn’t even aware it was for an album per se.

“It was really, really creative,” he tells DX of the studio session that ultimately produced the song. “He has a lot of input and because he knows what he wants. He gets a lot of input from the producer as well. He was interesting to work with him because I’ve never really worked with him before so I didn’t know what to expect. But it was really dope because for a brief moment, I got to get inside [his head] and see how he operates as an artist and producer.”

The veteran producer also says he heard the track’s shock value in its early creation stages but didn’t know what would come of the final product. He also revealed that he and West have much more material in the vault.

West may have went on to infiltrate pop culture lure through mainstream awards, reality show matrimony and global recognition, yet inside revered Hip Hop conversations, Havoc isn’t exactly considered his unequal. As the production half and ardent rhymer of Mobb Deep, most fans consider at least two out the duo’s three mid-90s albums (The Infamous, Hell on Earth and Murda Muzik) as documented classics and Havoc has crafted a slew of outside beat work for the likes of The Notorious B.I.G., Diddy and 50 Cent. When asked whether or not his intermediate group will attempt to piggyback on the evolving landscape of rap music, he didn’t rule it out but explained that being a Hip Hop legend also has its downside.

“Me and [Prodigy] are definitely open-minded to doing things different. It’s just, a lot of the times…our fans, our core audience, they hate to see us do something different,” he admitted with a chuckle. “We get kind of hated on. They throw us in such a box. So it’s kind of difficult for ‘Mobb Deep’ to do that.”

The trio of aforementioned seminal albums were indeed amongst the most influential for a time when hardcore subject matter intertwined with creative penmanship dominated the industry. However, one could easily win an argument that their approach was one-dimensional in the hardened topical flavor. Fans who were raised on Mobb Deep music only knew one way of looking through the lens so their vision was undoubtedly blurred when the Queensbridge outfit changed up their packaging. Namely on “Hey Luv (Anything),” the R&B-tinged flagship single to their 2001 album, Infamy, which also featured 112. Let Havoc tell it, the risk of alienating the core was a historic feat. The song is actually the group’s highest charting single on the Billboard 200.

“To this day, that’s still our No. 1 radio single to this,” he laughed, reflecting on all the hate he endured as they reached new plateaus. “We got mad SoundScan and Nielsen ratings off of that joint.”

Although you can’t please everybody, diehard supporters will be thrilled to know that Hell on Earth is getting its own 20th anniversary celebration, much like The Infamous did last year. Havoc promises the U.S. tour will “start in March” and the European leg will follow directly after.

They told you the Mobb was forever. Chronicle Havoc’s upcoming tour moves on his Instagram @MobbDeepHavoc.