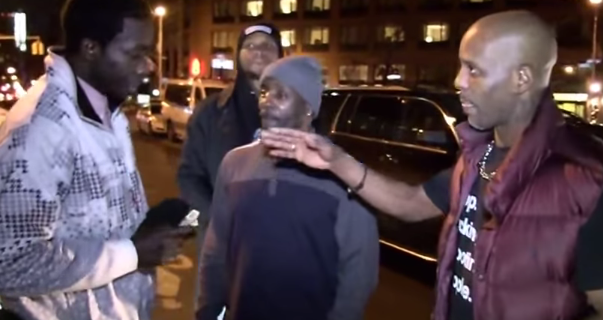 DMX Refuses "Advice" From A Panhandler

For every handful of career blunders – footage of him proclaiming to “stomp a nigga out in the name of Jesus” or missing court appearances for child support – DMX still finds tender moments, including footage of him humbling himself to The God MC, Rakim.

Yesterday (February 5), TMZ managed to capture a philosophical conversation between X and a panhandler.

“I’ll give you what God makes it in my heart to give you,” says DMX after the unidentified man goes from asking for $5 to $20. “What you do with it is between you and God.”

Eventually, the homeless individual finds himself offering advice to the Ruff Ryder. “Get back up and you can do it,” the man says.

Being frank, 2015 wasn’t exactly the best year for DMX. His consistent legal drama didn’t help rebuild an already damaged reputation that almost seems impossible to repair. It didn’t help how lackluster his musical output as been as well, namely the unauthorized release of Redemption Of The Beast.

Watch the philosophical conversation between X and a panhandler below.