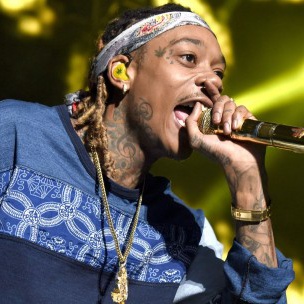 Wiz Khalifa asked to share his thoughts on Donald Trump, during Billboard interview.

While speaking on presidential candidate Donald Trump, Pittsburgh, Pennsylvania rapper Wiz Khalifa revealed that his personal causes are marijuana, peace, and music. He explained that he hasn’t paid too much attention to Trump and the real estate mogul’s recent remarks, since he chooses to operate “on a different frequency.”

“I really don’t pay attention to all of that because I kind of operate on a different frequency,” Wiz Khalifa said. “And I love all people. I’m a black man and I come from an urban community, so I know what it is to come up out of the struggle. And now I’m looked at differently because I have money. But I still get the same types of stereotypes. And I still feel the same way when I hear those things. But at the end of the day, I know that there’s bigger and better. So, when your mind is elevated and you think differently then I feel like that stuff doesn’t really matter to you. I’m really all about everybody coming together and getting along. Whether you’re black, white, or whatever it is. My cause is marijuana and peace and music.”

In addition to speaking on Trump, Wiz spoke on his “Bake Sale” collaboration with Travis Scott. He revealed that Scott is an artist he’s wanted to work with for a long time due to the similarities he shares with the rapper.

According to Wiz, he and Scott both share the same energy, inspirations, and crowd.

“Travis is a friend of mine,” he said. “And I been wanting to work with him for a really long time. Before he became as popular as he is. I’ve been aware of his talents. What he can bring to the table for somebody like myself who writes. He produces and writes as well. So, it’s like us being young and having the same energy and some of the same inspirations. And a lot of the same crowd, it really just made sense on that end, but then I really liked the dude too. So, it was fun. It was something that I really wanted to do.”

Video of Wiz Khalifa speaking on Donald Trump and “Bake Sale,” can be found below.