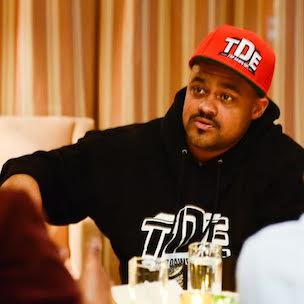 During a conversation with Elliott Wilson and Brian “B.Dot” Miller on Rap Radar’s podcast, Punch says Kendrick’s album was a throwback to classic albums of yesteryear.

“I think [Kendrick Lamar] really, really raised the bar high,” Punch says regarding good kid, m.A.A.d city. “We just playing for who [is] coming in second at this point. It’s not being biased because that’s my artist but before that album, out of all of the new guys, this album was almost a throwback to what we love about Hip Hop; the way the whole album was sewn together through a narrative to the beats to all the lyrics. Everything just linked and connected. It pretty much set the bar for classic records of today.”

Punch also spoke on To Pimp A Butterfly’s closing track, “Mortal Man,” which features a back-and-forth-like conversation between Kendrick and Tupac Shakur. The quotes used were taken from a 1994 interview Tupac had done with Swedish music journalist Mats Nileskär.

“He got the [Tupac] interview overseas,” Punch said. “He played it for me before one of the shows. Just a little clip. I was like, ‘This is stupid right here. This is what’s gonna make it classic if you weave it in the proper way.’

“It was also cautious if we don’t do it right it could be really, really bad,” Punch added. “I always had it in my mind that I gotta bring it back up at the right time. [Kendrick] went through recording the album—and recording the album [some more]—and I would lean in every so often like, ‘What you think about that Pac stuff now?’”

Elsewhere in the conversation, Punch spoke on where he sees Kendrick’s career going in the coming years.

“We want to continue to grow, keep moving,” he said. “I can see Kendrick acting real soon… Just look at his videos. He’s growing as a complete artists.”

Punch’s appearance on Rap Radar’s podcast can be heard below: