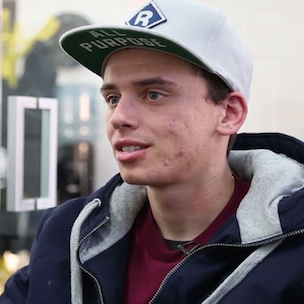 Maryland emcee Logic and Grammy-winning rapper Big Daddy Kane agreed to collaborate on a track for Logic’s next album in a telephone exchange set up by manager Steve Lobel and published on Blurred Culture today.

“Man, thank you,” Logic says. “This is very surreal. Without you I wouldn’t be here, and I’m not trying to jump the gun or anything…you are somebody I would love to have on my album. ”

“Let’s make it happen brother,” Big Daddy Kane says. “It’d be an honor, whenever you are ready.”

Logic’s debut album, Under Pressure, was released to a 4.5/5 review from HipHopDX.

“The majority of Under Pressure’s depth comes from its depth of emotion, which is a byproduct of its great writing,” the HipHopDX’s review says. “Logic is a proficient storyteller in the linear sense. All of his songwriting has a purpose and it moves directly toward a given point that feeds back into one of the album’s themes — fragile relationships with relatives, his troubled past, his promising future, and his blending of his personal experience with that of the wider cultures.”

After striking the deal, LBC rapper Crooked I enters the fray with words of encouragement for Logic.

“Congrats on everything man,” Crooked I says. “We out here rooting for you. You are making real Hip Hop. It’s dope to be a witness.”

Lobel discusses the conversation, before ending the call with Logic.

“It’s crazy Logic, we just met yesterday,” Steve Lobel says. “But I don’t play games. You said you wanted Kane and I delivered in 24 hours.”