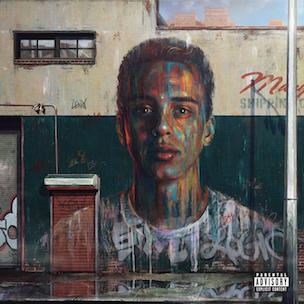 Maryland’s Logic is a student of history, an active observer of popular culture who is careful to catch the details, and he grafts the blueprints of the past into his personal narrative. Appropriately named, Logic makes career decisions rationally, often consulting the past for perspective and context. He built a fan base remaking himself in Frank Sinatra’s image. He studied Reasonable Doubt’s suave sense of cool and paired it with the detailed-oriented street reporting of Nas and Big L. He commissions Thalia, the 2.0 version of the Midnight Marauders program guide, to fill the same role as her predecessor for his first LP.

His debut album is called Under Pressure, and while becoming a great rapper using a measuring rod of previously established Rap milestones is more or less a modern Rap trope,  Logic takes it to new heights; under the direction of No I.D. he repurposes all he’s learned in his studies into a framework. The marvel is that he does so without compromising the integrity of his own story. Under Pressure is a magnificent debut that is both remarkably introspective and brilliantly meta; it’s under pressure and alleviating it simultaneously.

He sampled heavily on the album, culling the likes of OutKast‘s “So Fresh and So Clean” and KRS-One‘s “Mad Crew” to create different tonal arrangements, which give off the perfume of familiarity. We should be familiar, his story is as started from the bottom as they come, bu it’s his ability to Rap in layers which differentiates him. On “I’m Gone” through an “I Want You” Marvin Gaye sample, he combines so many elements into the song it feels as though it will spill over. He switches up his flow several times, cutting his syllables short or elongating his cadence to make a point.

There’s definitely a heavy dose of ‘90s Rap revivalism at play when listening to Logic. His debut skews away from the trends of right now in favor of traditional rap ideals. This factors into how he tells his stories: with ferocious lyricism over wailing, often soulful beats. He’s very in tune with his craft as a rapper’s rapper that would make the progenitors of the form proud. At the end of the day, that’s how he measures success: “I wont be defined by the sales of my first week/ In my mind, only way I fail is if my verse weak,” he raps on the intro. For Logic, being a great rapper (in terms of stature) starts with being great at rapping in a polished, labyrinthine sort of way.

It only takes one listen to realize Logic is a very technically skilled lyricist; though not particularly knotty, his wordplay is elastic flexibly bending to the whims of cadence. He has a rare understanding of the dexterity of his own flow, and where he used to use it as a crutch to prove he was a capable rapper he now uses it in spurts to maximize its effectiveness — the Tae Beast-produced “Growing Pains III” inserts bursts of rapid fire into a more subdued flow.

The majority of Under Pressure’s depth comes from its depth of emotion, which is a byproduct of its great writing. Logic is a proficient storyteller in the linear sense. All of his songwriting has a purpose and it moves directly toward a given point that feeds back into one of the album’s themes — fragile relationships with relatives, his troubled past, his promising future, and his blending of his personal experience with that of the wider cultures. When writing from a place of darkness, he doesn’t exactly reinvent the wheel conceptually, but he finds superlative ways to tell his story that are both honest and deeply introspective. He writes about nicotine metaphorically as if he’s in a poisonous committed relationship (“Nikki”), and it’s poignant because he basically is. He name-drops “her” throughout Under Pressure and the big reveal is almost cinematic.

There are a great many moments that make Under Pressure feel like a feature film about Logic’s life, and when at its best, it is creating that sort of imagery. The Dun Deal-produced “Buried Alive” ponders whether the Rap rat race is all really worth it. “Do you really wanna be famous? Do you really wanna be a superstar?” he asks himself. The ominous “Gang Related” digs deep into street life, and he recounts his brother selling crack to their own absentee father in triple time. On the title track he raps sentiments sent from his sister and aforementioned father before responding in kind. The track closes with real voicemails that frame his success with perspective. Instances like these make Under Pressure, the self-aware debut from a young hopeful chasing greatness, a true early success.