50 Cent has been known to clown on people especially via Instagram and yesterday would prove no different as Fif took to the social media site once again.

50 also posted another picture of Miss Jackson with the caption: “CHAMP I ain’t gonna lie this motherfucker bad. You need to start operation GET THE BITCH BACK. Right now !!!” Mayweather is currently dating Doralie “Bad” Medina who will also celebrate her birthday on Sunday.

Floyd Mayweather broke up with Miss Jackson earlier this year and many believed Nelly had something to do with it. The Middleweight Champion claimed the breakup was due to her having an abortion.

50 Cent and Mayweather have had a long history of animosity between the two after their storied boxing companionship. Recently 50 took to Instagram and posted a video of him telling Mayweather to leave T.I.’s wife Tiny alone.

View all of the Instagram pictures relating to 50 Cent’s latest postings below: 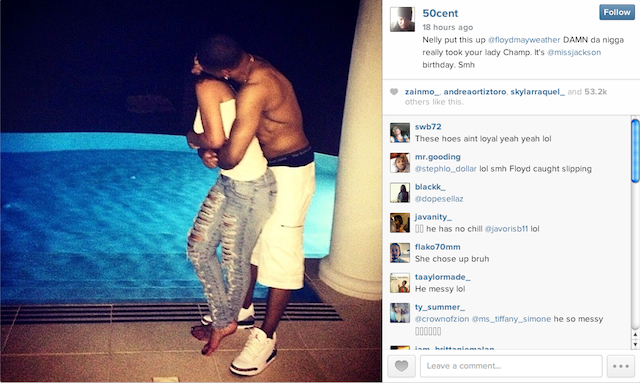