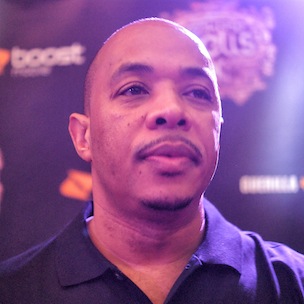 On the eve of Rock the Bells’ 2013 festival line-up announcement (May 14), U-God spoke with HipHopDX about what it means for him to be a part of Ol’ Dirty Bastard’s return to the stage via “digital performance.”

“Hip Hop is gonna move whether we movin’ or not, man. Peoples is gonna do what they do,” U-God said when asked about seeing Ol’ Dirty Bastard in a new digital form. “So you just gotta enjoy the music. Sit back, relax and just enjoy it.”

U-God continued, adding that he feels the digital performance makes this year’s festival special. Calling it an event, U-God was quick to note how “beautiful” this is, in his eyes.

“When I was young, we went to Union Square. That was the first time I seen Will Smith, Big Daddy Kane, Eric B. & Rakim and KRS-One when it was raw and all that fly shit. So that had an effect on my rhymes. I wanted to be like that but I didn’t know how to. But as a man becomes a man, you start learning, ‘If I wasn’t a part of that event, maybe I might’ve been just a little more different.”

For fans, memories of Ol’ Dirty Bastard are usually centered around his interviews, live shows or musical recordings. For U-God, this is different. His memories go back to their days before stardom.

“Dirty used to come to our hood, me, Method Man, Inspectah Deck, Raekwon. He used to come with GZA, RZA and they used to come in our hood, smoke weed, drink and do they little thing. Cappadonna too. You know what I’m sayin’? We was out there doin’ our thing so we were attracted amongst each other because we all liked to rhyme…We was hood buddies, man. We was always together,” he shared, before also adding that he learned from Dirty. “As an artist, I learned a lot from the man. That’s a whole different thing. So, rest in peace to my brother, man. I love my brother. I have beautiful memories.”

U-God may get a chance to relive some of those memories at this year’s Rock the Bells festival. Currently, the festival is set to feature Ol’ Dirty Bastard in what Guerilla Union has called a “digital performance” with Wu-Tang. In an interview with HipHopDX, Chang Weisberg, head of Guerilla Union, explained what it will look like. “I think it’s going to look and feel like what a lot of people say is a hologram,” he said, before pointing out that he isn’t calling it a hologram. “It’s a combination of multi-media and a lot of effects,” he added.

With those plans in motion, Ol’ Dirty Bastard’s widow has filed a cease & desist order to Rock the Bells organizers. In an exclusive with HipHopDX earlier this week, Icelene Jones explained the conflict. “I’m the administrator [of ODB’s estate] and the only authority to give anyone permission to do anything like this—any likeness, any music,” she said. “They need to come to me. I’m so available. I’m accessible. I’m easy to contact. I just want to make that understood. I’m a nice person. It’s just that people are doing things without my knowledge.”

Ol’ Dirty Bastard’s son, Young Dirty, also said that they want complete control over the performance and that they want to look at contracts. “We want all of the control,” he added in the interview. “I would love to see the contract with the paper on it. The money, that’s big business. We talking about money, that’s capitalization. We definitely want full control and authority over that.”

For now, Guerilla Union has issued this statement to HipHopDX about the matter: “We are aware of the cease and desist order and will release a more in-depth statement next week. It’s our goal and desire to do this virtual performance the correct way; it’s important for all parties to feel right and good about this, so we are working on it.”