The mystical sounds of Cannibal Ox records are anything but a forced, synthetic product. Since the duo’s release of their critically acclaimed album, The Cold Vein over a decade ago, the New York collective has since seen times of triumph and controversy. It was perhaps Vast Aire’s harsh departure from the Hip Hop super group The Weathermen and subsequently Definitive Jux that would forever change the landscape of Can Ox.

On hiatus from making albums for the past few years, Vast Aire recently revealed that Cannibal Ox is working on new a new full-length album, which the news itself was enough to give so many hopes for something they’ve been thirsting for so long.

“The energy is like Darth Vadar versus Darth Maul… the energy is real good I can tell you that,” Vast Aire said with some laughter. “We only have a couple of songs right now so I can’t really, I can just say that the vibes are on right now and we’re making some fire.”

HipHopDX recently spoke with Vast Aire about the new album as he gave some interesting details about what’s coming. Now fresh off tour, the duo is working on brand new material sans many associates from the past. One thing is for certain, the Cannibal Ox brand and mindset has and always will remain the same.

HipHopDX: Man what’s been up with Vast recently maybe even non-musically?

Vast Aire: Yo man, I’m working on a book right now, which is crazy. I’ve been working on this book for like seven years, eight years. It’s takes seven to write it and one year to edit it, I’ve had to pass it off to get it re-edited like super-triple edited [laughing] but this is like a crazy book. It’s called The Asiatic Calendar and it’s based on the origins of man and time and God and it’s a crazy book. It’s been this other side of me that I don’t even think people think exist. But yeah I’m gonna definitely be dropping some jewels in this book so look out for that, also I’ve just been in the lab a lot rebuilding a lot of structures. I have a crazy production team right now so I’m really learning the whole scope of the studio and just zoning out so it’s just been fun, you know?

DX: Yeah you mention the book, that’s really interesting. What made you want to start on that and now finally get it finished?

Vast Aire: Well, it’s funny you ask that. I was kind of in between an argument and the fact that I was in between I was able to see both sides clearly and it made me go, “Okay, I got to write this book now.” The argument, it was actually, it was symbolically the atheist and the fanatic spiritualist and because I was somewhere in the middle, I was able to draw it all together and come together with a couple conclusions. I’m not going to be saying anything different than any other great philosophers have said in the last million years but I’m going to just say it in my way, from my time and I’m specifically going to dedicate it to the Hip Hop generation who is looked at as a dumb generation like we’re not supposed to know anything and there’s actually like scholars in this nation so I definitely just want to give back because I was given to, someone gave to me so putting this book together I’m going to help someone.

Vast Aire: I mean [Vordul Mega and I are] in the lab working on music all the time so as far as us doing a full-length the timing was just right. We just decided to rock out the tour, come back from the tour top of the year and then just zone out in the lab. The timing was just, we’re always making music but a full-length it takes some time and some concentration so the energy was right the timing was right, the fact that we’re coming fourth with our label, IGC Records, we’re just bringing it all together.

DX: Could you maybe expand on what the album is going to entail?

Vast Aire: We only have a couple of songs right now so I can’t really, I can just say that the vibes are on right now and we’re making some fire. That’s why we wanted to get back on the road, figure out some things. I like touring all the time, Vordul doesn’t like touring that much so it was special that he’s in that mode and we were like let’s hit the road, it’s gonna break us, it’s gonna wring us out and then we get to come home and just zone out on the record. We don’t have a date or anything, we just are starting to compile all of the crazy components that are going to be down with the record. It’s gonna be nuts, we’re definitely gonna be zoning out (laughs).

DX: Speaking as the newfound philosopher that you are, where do you see yourself as both an emcee and a person at this point in your career and in life?

Vast Aire: I’m a grown man and I love being a musician, I love the opportunity that was given to me. I love where my spiritual awareness is right now, definitely like all of that is secure with me. I grew up with Islam, I studied Dharma for many years, I’m a very well rounded spiritual dude. I think I’m good. I think most of us in my team right now are good, IGC Clique, Iron Galaxy, we’re like very comfortable right now because we’ve been ran through Hell and back, you know what I mean? What people don’t know is Hell is nothing but an exercise, it’s a purifier, it might be for a long time but it’s not forever and I’m speaking in a metaphoric term. It might feel like this forever but it’s not forever, it’s until you refine what you need to refine.

DX: Right, a lot of our talk here has been based on spirituality so I ask you, how big of a role does spirituality play in how you conduct your everyday life?

Vast Aire: Well you know the spirit is the real you so it represents everything. Some may argue in a semantic argument and call it “the mental” or “the mind” but that’s your real you so it plays a part in all of this, it plays a part in everything you do morally with your body so my mental understanding and my soul and all that I’m in tune with it and I’m definitely, it’s always a part of my artistic expression definitely always. I mean what did we mean when we said pigeons versus phoenix, you know? That right there is a secret. Like the pigeon was poor, he eats pizza crust, he’s a scavenger but the phoenix was the god that rises from the lower physical ashes to be born again anew so he always had hints of higher mental discipline in our music always, it’s always been a part of us. We were young, we were philosophers.

DX: Also as someone who’s been in New York for a long time and you and Can Ox have always presented something unique and different but how have you seen New York change over the past 10 years in your mind?

Vast Aire: Uh, wow, the juxtaposition is out of control, there are some neighborhoods that just don’t look the same, you can clearly see that they’re buying people out so that’s what’s going on in New York, which is going to change the city in the next 10 years but other than that there’s been some clubs that’s closed that were legendary but like other than that it’s still good old New York man. The best pretzel, the best bagel, the best pizza, the best steak, the best nightclubs, I don’t have no arguments with my city. You can’t do what has happened to my city to any other city and it’ll keep on moving, you can’t. We got seven buildings that done fell down, we’re up and moving in two weeks like nothing happened. Hurricane Sandy, it hit us hard, it was unpredictable, it was record-breaking. At the end of the day we are moving, this city is moving so you can’t do too much to this city. We’re a strong city and I’m proud that Hip Hop was born here because that’s my culture and I rep it to death. I’ve been all across the world and everyone wants to dress and talk like me and those who come from my block so we’re here to stay, we’re not going nowhere no time soon, this is not Disco. 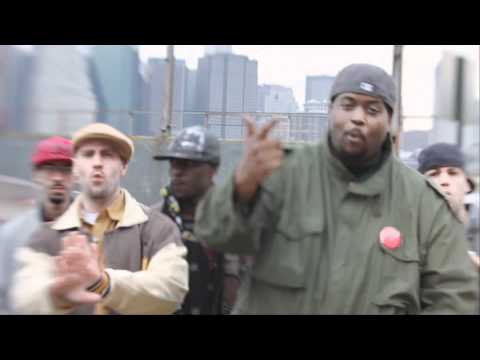 DX: For sure and finally man what’s next for you and Cannibal Ox in the near future?