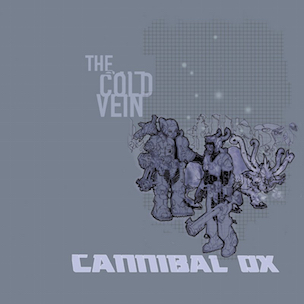 As commercial hip-hop has been on a steady decline for some time due to an over-saturated market of so many wack rappers and a sickening
lack of creativity, enter the independent scene, which has been thriving since ’96. A lot of heads give a lot of the credit to El-P, whose former group, Company
Flow, were instrumental in spearheading the indy movement. El-Producto, a premier beatsmith in music today has since moved on to anchor the Harlem duo of Vast Aire and Vordul. While Vast is more of an abstract poet with a slow, deliberate flow, Vordul paints beautiful pictures with his rhymes in a refreshingly unconventional manor.

Both emcees can definitely hold their own on the mic and both add another level of depth to each track, but it is El-P‘s incredible beats that steal the show. The beats are lumbering and down-tempo but are rich with layers of sounds that will captivate your mind. The Cold Vein can very much be considered an experimental album due to it’s lack of a blueprint and that is perhaps the best part about it. If Vein, Pigeon and Iron Galaxy don’t make you hit the repeat button then this album is probably not for you. Other tracks that I felt myself slipping away to are A B-Boy’s Alpha, Ridiculoid and Stress Rap.
Nothing on this album can even be considered the worst song, nor is there a downside to The Cold Vein.

Certainly not to be overlooked are the contributions of both emcees, particularly Vast Aire. His voice and delivery make him stand out regardless, but that aside he drops some of the best lines I’ve ever heard. For example, You were a still born baby/Mother didn’t want you, but you were still born/Boy
meets world, of course his pops is gone/What you figga?/That chalky outline on the ground is a father figure?/So he steps to the next stencil, that’s a
hustler/Infested with money and diamond clusters. Or just check the poetics from the opus The F Word; she was in a love triangle/but it wasn’t
like my feelings weren’t there to make it a square/penny’s for her thoughts/she’s my very own American Beauty, red petals when we talk…the f
word.

While El-P has said that this is his best work ever (I agree) I wholeheartedly think that his better days are still ahead of him. This album left me with a feeling that I haven’t felt since thevfirst time that I heard Dr. Octagon. While it is difficult to label this a classic album because it usually takes a few years to figure it out (with a few exceptions), it will be much easier to look at this album 2 years down the road and truly grasp just how dope it is. This is the album of 2001 and should define El-P‘s Def Jux movement.