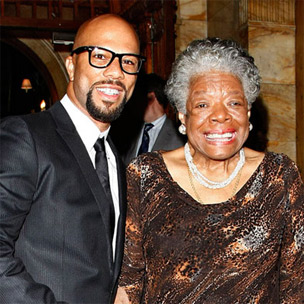 Veteran poet Maya Angelou expressed disappointment over Common using the N-word on the cut “The Dreamer” off his freshly released album The Dreamer, The Believer. After Com appeared on Hot 97 yesterday, he spoke with Angelou during an appearance on BET’s “106 & Park,” with both parties stating that there are no issues between them.

“I don’t think the word disappointment quite makes it. I was surprised. I know Common is brilliant. He may in fact be close enough to be called a genius. I’m not sure,” said Angelou. “I know that we’re all in process, and young artists are in process. It’s important to realize that all of you – all of us – I’m 83 years old so I’m almost out of the running.”

Angelou cited Machiavelli in explaining how her relationship with Com couldn’t be ruptured.

“There was a statement made by Machiavelli in the 15th Century. He said if you want to control the people, separate them, you can rule them. Divide them and you can conquer them. I will not be divided from Common by anybody’s imagination.”

RELATED: Common Responds To Maya Angelou’s Comments Criticizing His Use Of The N-Word