7L & Esoteric Speak Their Piece On New Song, "No Shots." 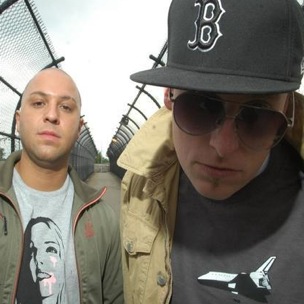 Veteran duo 7L & Esoteric have long had experimental concepts on their albums. On 2002’s “Word Association” from sophomore full-length, the duo had “Word Association,” where deejay/producer 7L threw words to Esoteric to associate with in the form of rhyme. On the Boston, Massachusetts group’s latest album, October 12th’s 1212, they play on the popular slang phrase “No Shots”

. The term, frequently used as a synonym for “no disrespect” often will follow a critical statement. For emcee Esoteric, this allowed him to reveal his honest opinions on some Hip Hop matters, similar to tracks in the past such as Skillz’ “Ghostwriter,” Kurupt’s “Callin’ Out Names” or Bumpy Knuckles’ “Industry Shakedown.”

The song’s opening verse explains its agenda in, “I air rappers out like flight school, B / Somebody gotta say it, might as well be me,” noting that he was raised on The D.O.C. and Tim Dog of the Ultramagnetic MC’s.

Overtop boom-bap production with a contemporary Pop vocal sample, the ensuing verses criticize contemporary Rap outfits such as DXnext alumni Wiz Khalifa and Nicki Minaj, as well as 3OH!3 and Waka Flocka Flame. Esoteric also takes umbrage with the Hip Hop media in saying, “You don’t know the pain, Guru passed, we were mournin’ / Then Travis Barker gets the cover of The Source and / I’d rather be a washed up rapper on a pacemaker / Than have to bow down and listen to these tastemakers / See, there’s new dudes that are dope like Freddie Gibbs and / Then the poser dudes that look like Debbie Gibson.”