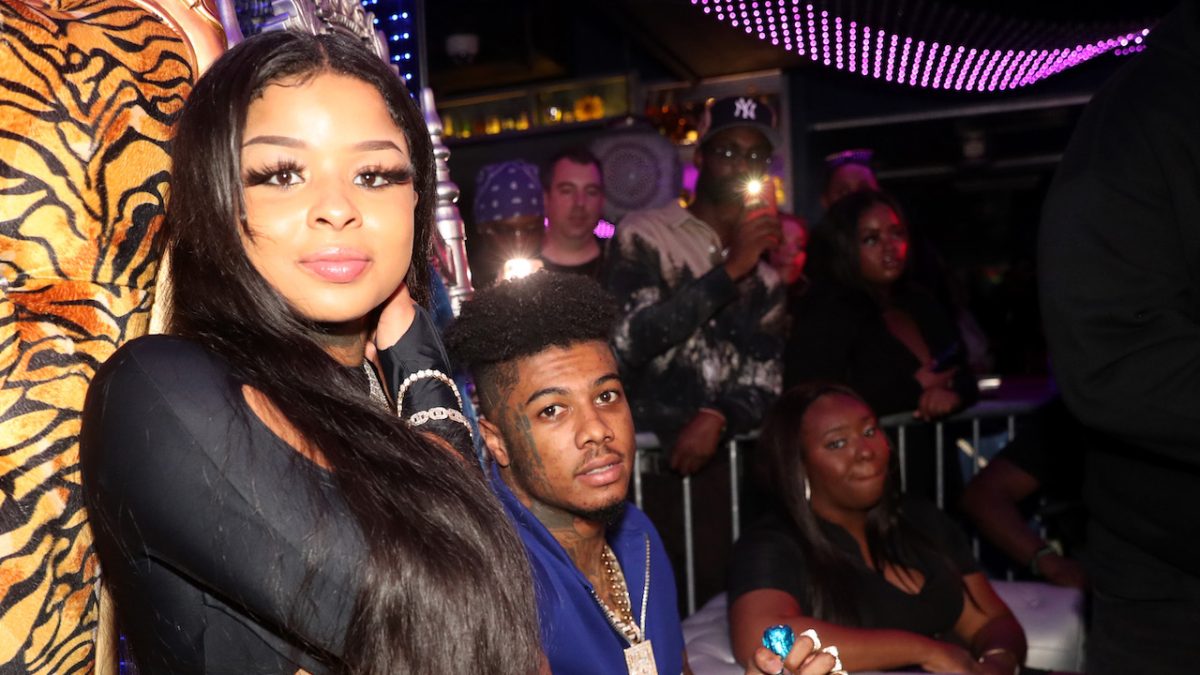 Chrisean Rock had to be escorted out of a podcasting studio after an outburst during an interview alongside boyfriend Blueface.

In a clip shared to Instagram by No Jumper on Thursday (January 19), Rock can first be heard off camera, screaming at her partner to come to her. The camera then pans to the troubled reality star, who can be seen sitting on the ground.

Security guards attempt to calm her down and explain that they have to take her out of the studio, as Blueface was heard requesting moments prior.

Seconds later, after the “Thotiana” rapper walks over to her, security proceeds to pick Chrisean Rock up to take her out of the studio as she flails her arms and legs in an attempt to resist. In the process, she kicks a large television or monitor which was mounted to one of the walls.

Rock can be seen continuing to fight while being removed from the studio as the cameras briefly follow her and the security guard into the hallway.

Hours after the video was shared to social media, eventually going viral, Chrisean Rock explained the incidents that led up to her expulsion in a lengthy Instagram post. “Blue told them to take me out of the interview once I got up after I said something to [sic] revealing n it wasn’t good look for blue,” the message began.

Rock went on to say that what set the entire episode off was her contradicting Blueface’s account of an incident in which he claimed she attacked him with a piece of glass during an altercation, which prompted him to hit her back. His ex-girlfriend and former artist maintains he dealt the first blow.

“One thing about me I’ll be ok if I started this altercation physically,” she added. “But this time he should have said next question instead of talking bout a situation n we both knew what happened I didn’t feel like anybody had my back I felt I had to really say what happened because that interview really triggered me bro.”

Blueface and Chrisean Rock’s often violent relationship drama has played out in public, on social media, and most recently on reality TV, since before they confirmed they were in fact dating. Their tumultuous relationship has resulted in multiple public spats, arrests and property damage.

The couple made headlines again earlier this week after Blue taunted his girlfriend in a new Twitter rant that heard him refer to his baby mother as an ideal woman.

On Tuesday (January 18), the “Thotiana” rapper hopped on Twitter to vent about Chrisean and their rocky relationship that has been in the public eye ever since they made things official in 2020.

“Food for thought: rock didn’t fight or attempt to fight anyone in her family for me her explanation ‘i don’t agree with fighting my family’ but volunteer me to fight mine when put in the same uncomfortable position that’s crazy work stand on yo principles or be held accountable,” Blueface tweeted.

He continued: “It’s no beef my only point is don’t volunteer me to do some you wouldn’t volunteer yourself to do the truth could never be disrespect #accountability.

“Not Finna beef with a n-gga on Twitter pull up. I’m not Finna have u use me as bait n let you side with ppl dat hate me,” Chrisean fired back in a since-deleted tweet. “Stop calling me rock it’s chrisean weird ass n-gga. Stop tweeting about me wen u can go be Blueface n be whatever n do whatever.”

She continued: “Leave chrisean out of the Twitter finger shit. You Not worried bout my mental health/ spirit rn. You a man tht break me apart bit by bit wen I’m at our house depress sleeping.”

Wack 100 Confronts Chrisean Rock Over Blueface Relationship: 'You're A Distraction'

On Wednesday (January 18), Chrisean Rock took to Instagram to apologize to everyone, including Blueface.

In her post’s lengthy caption, she once again offered fans some insight into her recent mental struggles, writing, “I ran to social media for this cuz honestly I appreciate my fans n I love to be very transparent Hopefully my darkness someone’s light .”

The former Blueface Records signee proceeded to share that her recent bouts of depression had led her to drink more heavily, which has made it difficult for her to be present for her loved ones.

“Lately I haven’t been eating I just been sleeping,” Chrisean Rock revealed. “I struggled with depression n suicidal attempts since a littl girl only because I feel like earth always gave it to me tuff I love God so much I wan be in heaven so bad n I hate my self because maybe if I was better person life wouldn’t Make me feel like dis…”

She added that she felt like a “dark cloud” was trying to consume her and announced that she would be turning to prayer and fasting to attempt to push through this difficult period in her life.

“To get out of this darkness I’m gon fast …pray harder n I’ll be back somewhat to my self…,” she wrote in the caption. “Da crazy part is once I got money once everything started paying off the devil started to attack more I lost ppl because what I’ve became.

She continued: “I became less my self n started being more depressed drinking a whole lot that depression started to look like selfishness cuz stop being there for ppl . I started to neglect my relationship with blue I started neglecting my self I’m just sorry to who ever I abandoned because of mental health. I’m sorry I’m sorry I’m sorry”

It’s unclear if Wednesday’s post was made before or after the No Jumper interview.