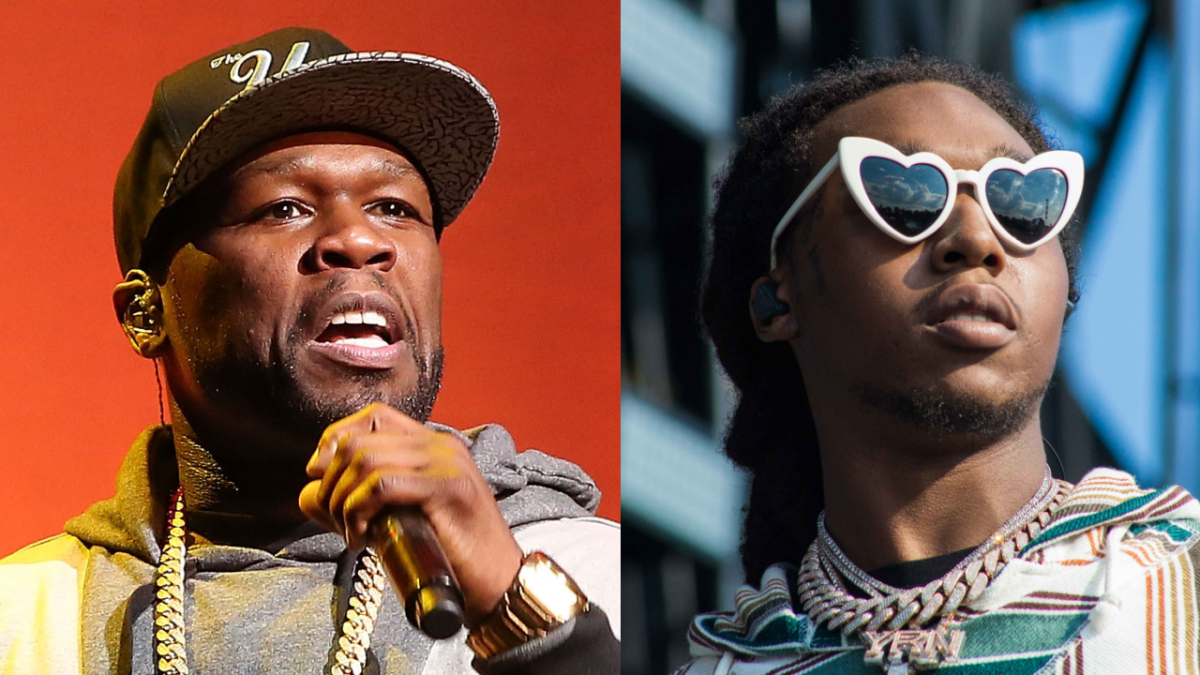 50 Cent has paid tribute to Takeoff following the rapper’s tragic death, while offering words of advice to his Migos brethren Quavo.

During an arena concert in Seinäjoki, Finland on Tuesday night (November 1), the G-Unit rapper honored Takeoff, who was shot and killed in Houston, Texas earlier that day.

Much like he did during a show in Sweden following Coolio’s passing in September, 50 Cent saluted the late Migos lyricist by projecting his image on the stage as the group’s “Bad and Boujee” hit rang out through the venue’s speakers.

“I paid tribute to Takeoff last night in Finland it was lit,” 50 tweeted on Wednesday (November 2). “GLG GreenLightGang tour let’s get it!”

50 Cent also turned his attention to Takeoff’s rhyme partner and uncle, Quavo, on Wednesday, offering the surviving Migos member some words of advice on how to keep his nephew’s “legacy” alive.

The Power mogul shared a clip of Pop Smoke’s former manager Steven Victor recalling a conversation with 50 following the Brooklyn rapper’s February 2020 murder, in which 50 urged him to put his grief aside and complete Pop’s posthumous album Shoot for the Stars, Aim for the Moon.

“50 was like, ‘Yo, you’re being selfish. You can’t let your emotions or you being in this depressed state stop you from executing what plans you guys had. Because three weeks ago you guys were in my office talking about taking over the world,'” Victor said in the interview.

“He passed away, but who’s gonna keep his legacy going? Who’s gonna make sure his music comes out so he can take care of his family? He was like, ‘That’s on you. I get you’re sad, but this ain’t the time for that … You gotta finish [his album]. You gotta see this through.'”

Takeoff: Video Of Quavo In Heated Argument Prior To Fatal Shooting Surfaces

In his Instagram caption, 50 encouraged Quavo to follow the same advice he gave Steven Victor when it comes to Takeoff’s posthumous music.

“This is really how it goes @QuavoStuntin you have to position this Album correctly for Take Offs Legacy, go make a couple changes and address everything all artist make the best music out of painful moments,” he wrote. “R.I.P to Pop Smoke R.I.P to TakeOff.”

50 Cent previously reacted to Takeoff’s death by reposting a heartfelt message from Pierre “Pee” Thomas — the CEO of Migos’ label, Quality Control Music — along with some words of his own.

“@qcmceo_p bro i’m sorry for your loss,I read your post and thought it would have took me 3 hours to write that i can imagine all kinda confusion going on,” he wrote on Instagram. “hold your head man bro. RIP TakeOff.”

50 is just one of many famous names who have mourned Takeoff’s death, with Drake, Beyoncé, Future, Travis Scott, 21 Savage, T.I., Gucci Mane, Rick Ross and others also paying their respects to the slain rapper on social media.

Fellow Migos star Offset quietly changed his Instagram avatar to a photo of Takeoff, although Quavo, who was with Takeoff at the time of the shooting, has yet to address the tragedy.

According to the autopsy report, the 28-year-old rapper (real name Kirshnik Ball) died of “penetrating gunshot wounds of head and torso into arm.” Quality Control believes they were “stray bullets.”