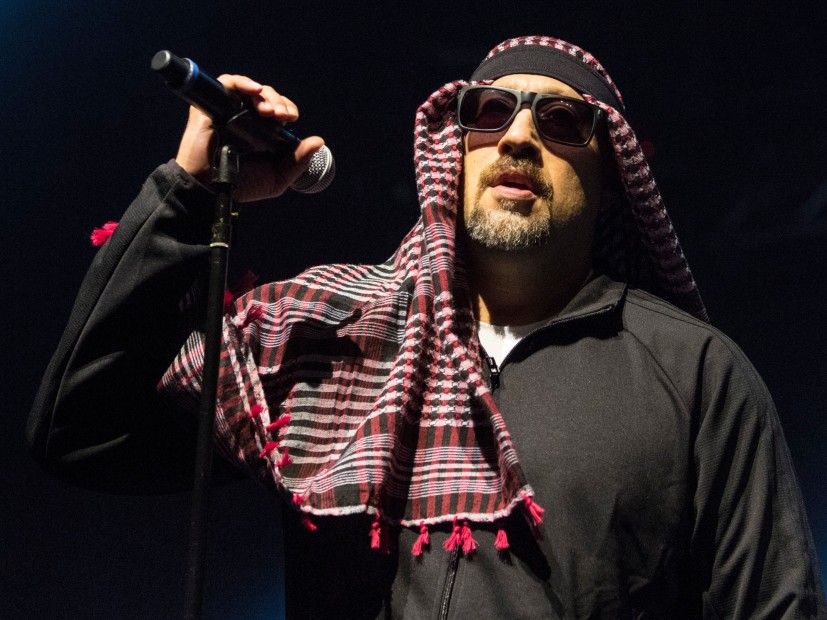 On the day Cypress Hill released “Band Of Gypsies” — the first video from the group’s upcoming Elephants On Acid album — B-Real was at the B-Real TV studios in Los Angeles working on one of his other endeavors.

His tireless work ethic has landed him in the Hip Hop history books alongside his Cypress Hill brethren. As the first Latino Hip Hop outfit to reach multi-platinum status, Cypress Hill has been breaking down barriers since its 1988 inception.

“We’ve been working on it for quite some time,” B-Real tells HipHopDX. “I know our core fans have been asking us for it for a very long time, so to finally see the beginning of the roll out is great.”

With Muggs back in the production chair, Cypress Hill enacts the same formula that made 1991’s self-titled debut and 1993’s Black Sunday resonate with so many people.

“Muggs finds a way to come up with a different sound that no one else is doing and takes it completely out of the box but it still makes sense,” he says. “Him doing what he did on this particular piece in terms of production, it’s classic yet innovative.”

During the eight years since Cypress Hill has been on hiatus, B-Real launched Prophets Of Rage with Chuck D, Tom Morello and other members of Rage Against The Machine, while Muggs has been involved in numerous projects, including 2017’s Gems From The Equinox with Meyhem Lauren and his recent Assassination’s Day collabs with DOOM. It took time to put the final touches on Elephants On Acid, but Muggs finally got to a place where he was ready to unveil it.

We said it in ‘93… WE AINT GOIN OUT LIKE THAT!! #BlackSunday #25Years @breal @sendog @djmuggs_the_black_goat_

“Muggs is someone who wants to dial it in completely, the way he wants to hear it,” B-Real explains. “He may change his mind a few times and tweak a few things, so it’s just one of those things where we put a bunch of work into it and it comes out when he feels comfortable with it. [apple_news_ad type=”any”]

“He eventually felt comfortable with it and when we all heard the finished result, we were like, ‘Okay, we get it.’ This is just another one of those magical pieces that he put together musically.”

The growth on their new material is evident. Lyrics about gang banging and getting high doesn’t dominate their music like it once did. In 1995, Cypress Hill was asked to make a more radio-friendly version of the single “Throw Your Set In The Air,” which detailed the inner workings of gang life.

To accomplish this task, Cypress Hill enlisted EPMD’s Erick Sermon, Redman and MC Eiht for the “Throw Your Hands In The Air (Remix).”

“We were only getting so much love from radio because of what the song was about, which was basically a story on getting inducted into a gang and the chorus is ‘throw your set in the air,’ right?

“Sony asked us to do a remix that was less aggressive obviously, so we came up with ‘Throw Your Hands In The Air.’ We asked a few of our friends to be a part of it like MC Eiht, Erick Sermon and Redman. Fortunately, their schedules permitted that they could come down and be a part of the video.”

The original version of the track, which appeared on the platinum-selling Cypress Hill III: Temples Of Boom album, also caused a temporary rift with Ice Cube. B-Real invited the N.W.A legend to the studio one day and played him some of the songs Cypress Hill was cooking up at the time. There, Cube heard the chorus for “Throw Your Set In The Air” and allegedly stole the hook for his own smash hit, “Friday.” But that’s bong water under the bridge. [apple_news_ad type=”any”]

“The story goes is that it was influenced by our song ‘Throw Your Set In The Air,'” he says. “That’s the connection. We’ve been cool since 1997 or something like that [laughs]. It was a long time ago. We’re way cool now.”

Looking forward, B-Real is focused on getting Elephants On Acid to the masses, but he’s also working on another Prophets Of Rage album with Public Enemy mastermind Chuck D — who he calls his “big bro.”

“If it wasn’t for him a lot of us wouldn’t be doing this stuff,” he says. “We’re [Prophets Of Rage] recording some new stuff, some new material and just getting that new material ready. For me, it’s constantly working from one project to the next, but everything’s been going well with Prophets’ recording and where we are going with that.”

B-Real has another solo album in the works with esteemed producer Scott Storch as well. It will mark his official follow-up to 2009’s Smoke & Mirrors.

“I put out a free album maybe two years ago called The Prescription that I’ve put up on all the streaming sites and what not,” he says. “I just re-released it on Apple Music a couple months ago. That was something that I just recently put out, but yeah, I’m currently working on a solo album with Scott Storch right now. We’re almost done with that. Definitely excited about that one.”

Elephants On Acid is expected to arrive on September 28 and a tour in support of the project will follow. This time, Mix Master Mike will fill in as the tour DJ. It’s a relationship that started before Mike even joined the Beastie Boys.

“Mike’s been our friend for a long time and we’ve been fans of his since he was just doing DJ exhibitions and what not,” he says. “We’ve known of his skill set for quite some time and when he joined the Beasties, we were like, ‘Wow!’ because what he added to their show, no other DJ was doing stuff like that.

“So we thought, ‘Why not bring him on to Cypress Hill and try something different?’ Since he’s been on board with us, it’s been really dope to see the progression of the new show, his take and his attack on it in terms of driving the live show.”

To close out 2019, Cypress Hill will also unveil their star on the Hollywood Walk Of Fame. The Hollywood Chamber of Commerce announced the news in June.

“We’re working on that,” he says. “We know it’s sometime next year but we’re not exactly sure of the date of the ceremony yet. I never envisioned that happening so, it’s a cool honor.” [apple_news_ad type=”any”]