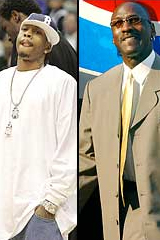 Anyone who has been to a professional basketball game in the last few years or watched a game on TV has witnessed the preeminence of hip-hop music in everything from the stadium music to the promotional commercials. Unfortunately, the unscrupulous personal behavior of some league players coupled with unfavorable stereotypes have tainted hip-hop’s image. Take for example, Indiana Pacer, Ron Artest. His widely publicized brawl with fans and other players in 2004 during a game between his team and the Detroit Pistons left an ugly scar on the league and was an indicator of an escalating problem with NBA players on and off the court. Consequently, players like Artest became quickly associated with what many perceived as the “dark side of hip-hop.” In fact, Artest even made his own rap record months after the incident. Did hip-hop have any influence on Artest’s behavior? Is the fact that he made a rap album just an easy scapegoat for his behavior? There are no easy answers.

Brian Burwell of the Saint Louis Post Dispatch commented on this issue at the time of above-mentioned player/brawl incident. “Marketing people thought they were getting Will Smith and LL Cool J. But now they’ve discovered the ‘dark side of hip- hop’ has also infiltrated their game, with its ‘bling-bling’ ostentation, its unrepentant I-gotta-get-paid ruthlessness, its unregulated culture of poses, and the constant underlying threat of violence . . .”  This is the unfortunate and too often unwarranted stigma that comes with hip-hop culture. And as with any genre/music form while there are many that defy the stereotype there as just as many that many that fit the mold.

As a result you have an executive/corporate NBA (not the players or a good percentage of the fans) that is still reluctant to fully embrace the hip hop culture or music. This was made very apparent at this year’s All-Star weekend in Houston, a blossoming hip-hop capital. As countless representatives of the hip hop culture sat courtside for the festivities while millions watched at home on TV, coordinators of the event elected to have a country music act perform at halftime. Regardless their reasoning, the reaction from the hip hop community and many of the players and fans ranged from disappointment to all out anger. Because of the decision to not have a current hip hop artist or group perform, which seemed to be a logical choice, many perceived this as the NBA saying “Just because it’s here doesn’t mean we have to encourage it.”

Another interpretation of this issue, according to some, isn’t simply that NBA players enjoy hip-hop music but rather once they gotten to a comfortable point in their careers economically they begin to live the hip-hop lifestyle. Granted, many of these ball players came from the same neighborhoods and suffered similar hardships while growing up as heir fellow artists. Should we expect them to conduct themselves any differently? It may be a perfectly acceptable lifestyle to embrace in their personal lives, but as representatives of a professional athletic team and its city and as public figures, they have a greater responsibility. Despite hip hop’s current popularity, the majority of ticket-buying fans have little patience for superstars who spend more time posing than playing.

As mentioned before, hip-hop is not inherently bad, and the integration of hip-hop into the NBA dates back to the days of Michael Jordan. Interestingly, Jordan ushered in the end of “regular” shorts, did Nike commercials with hip-hop artists, and wore shoes that were banned because of their color violations.

From a marketing standpoint, you’d be hard pressed to find a better coupling of a music genre/culture and professional sports. In fact, the two have become so intertwined that one essentially promotes the other.  The problem lies in the fact that this is a union of outlandish individuality co-mingled with team sports.

You don’t have to look far to see this “me” attitude affecting the sport. For instance, last year basketball commissioner David Stern laid down the law on hip-hop style by instituting an NBA dress code. Stern said, “Some of my (team) owners are hip-hop, but they dress in a different fashion. Hip-hop doesn’t mean sloppy.”

Banned under the new dress code were headphones, chains, shorts, sleeveless shirts, indoor sunglasses, T-shirts and jerseys and headwear such as baseball caps.  Stern was adamant that the new dress code be followed for public appearances, including arriving at and departing arenas and sitting on the bench out of uniform.

Ironically, hip-hop artists often sport licensed clothing and gear of NBA teams while in the public eye as well as in music videos and on album covers. This is further evidence that the hip-hop culture has fully embraced the NBA — hip-hop has, in many respects, become an iconic representation of the sport. Unfortunately, focus on the negative aspects of hip-hop and the NBA undermines the positive multicultural aspects of the union.

We Can Work It Out

Charlotte Bobcats owner, Robert L. Johnson, who is also founder of the Black Entertainment Television network, is the first African American owner of a professional team and co-owns the team with hip-hop artist Nelly. According to Johnson, “Multiculturalism is a part of America that is going to impact our images and our cultural experiences from now on.”

Those with a cynical perspective would, undoubtedly, point to the fact that the money earning potential of the NBA using hip hop and vice versa is astronomical but players and artists believe there is a deeper connection. For many young players coming up from the streets, hip-hop allows them to exhibit pride and showcase their roots. And for artists like Nelly and Jay-Z, achieving a level of success that would grant them the ability to not only associate with these athletes but to be co-owners of a team, is a prime example of the entrepreneurial spirit that built this country.

Summarizing the raw emotion, perhaps even the love, that these two cultures share, hip hop artist Nelly observed, [ESPN Mag on Hip-Hop in the NBA, by Chris Broussardi], “There’s a lot of love between rappers and players. When we see each other, we’re both in awe. And rappers love making music for the guys to get hyped to before the game. I’m telling you, when you’re in the booth making a record, you’re like, ‘Oh, somebody’s gonna rock to this. Somebody’s gonna come out and get it started because of this joint.’” 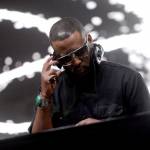