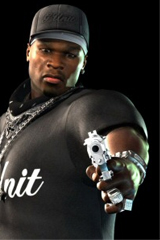 As hip hop became a more
prevalent part of pop culture in the U.S. during the late 1980’s and early 90’s
(film, fashion, television), there was one form of entertainment that remained
apparently untouched by its influence–the video game industry. Eventually, game
publishers and developers realized the marketing potential of the music and
began gradually integrating hip hop music into sports games like Activision’s Tony
Hawk Pro Skater and Electronics Arts’ NBA Street and NBA Live
series. Yet there still weren’t any non-sports games featuring hip hop artists
and their music.

In 2003, noted sports game
publisher Electronic Arts (EA) collaborated with developer AKI Corporation and
Def Jam Records to come up with a new twist on the wrestling concept that would
feature not only music from the legendary label but also the voices and
characters representing hip hop artists in the game itself. AKI, a veteran
developer of wrestling games, created the framework or game engine to support
the idea. Rapper Noreaga (one of the featured characters in Def Jam: Fight
for NY) noted, “If you’re not playing a video game, you listen to hip hop,
or while you’re playing the video game you listen to hip hop. So why not video
games that already got hip hop on it? You can save electricity.”

The first game in the series, Def
Jam Vendetta, combined wrestling, hip hop artists, and many of the most
well-known tracks of the time. This game was the perfect combination of two
forms of entertainment. It came as no surprise that Electronic Arts’ (EA)
Sports Big Division stepped up to this challenge. This Division had already
been incorporating hip hop in many of its sports games. The basic premise of
the game is that in a fictionalized street fighting universe wrestlers and a
few hip hop artists (DMX, Method Man, Ghostface Killah, to name a few) duke it
out street style in underground wrestling rings and alleys on their way to the
top.

Jeff Karp, Vice President of
Marketing for EA at the time, commented on the pairing of the two worlds, “As the line between games
and traditional forms of entertainment continues to blur, EA will continue to
partner with strong brands like Def Jam to redefine the rules with innovative
new titles like Def Jam VENDETTA,” Thanks to the game’s success, a year
later, EA released a sequel that opened the original game’s universe to the
streets of New York (the quintessential home of hip hop) featuring more than 40
hip hop artists, five different styles of fighting and even more hip hop
music. Hip hop had finally made its mark
on the burgeoning videogame industry.

In the fall of 2004, Rockstar
Games, still simmering from the heat their Grand Theft Auto franchise
was taking from politicians and parents alike, made a bold move. For the next
installment of their GTA series, Grand Theft Auto: San Andreas, the
developer made an African American the main character of the story and created
a three-city alternate universe based entirely around the west coast urban
culture of the early 90s. For the first time in video game history, there was a
game featuring a cast of African American characters coupled with the music,
clothes and lifestyle that was and is hip hop. There was even a character made
to look like late NWA rapper Eric “Eazy E” Wright. Despite the fact that the
story drew criticism for its ultra-violent crime slant and the stereotypical
representation of minorities, San Andreas provided a relatively accurate
portrayal of gang life during that period. Clearly, hip hop had finally come
into its own in video games. The game
even spawned a two disc CD featuring a varied assortment of music of the time
including a heavy dose of west coast hip hop.

Since the release of San
Andreas, a string of games have been created that are fully ensconced in
the hip hop culture from Eidos’ 25 to Life to Atari’s Mark
Ecko’s Getting Up to Aspyr’s True Crime: New York City. Last
year, chart-topping rapper 50 Cent not only had a film made about his life, but
was directly involved in the creation and development of his very own videogame
title by Vivendi Games’ – 50 Cent: Bulletproof. This action/adventure
game featured 50 Cent in the leading role along with members of G Unit as
maverick heroes taking on various crime families. Capitalizing fully on the
format, the game also featured new music videos as well as songs specifically
recorded for the game.

With recent releases like
Ubisoft’s And 1: Streetball and the upcoming third Def Jam game,
there’s no question that fans of both media—hip hop music and video games –can
look forward to more creative collaborations in the future utilizing both.

which as established by athletes
and hip hop artists who are big fans of videogames and love nothing better than
to compete with each other. The HHGL allows hip hop artists and athletes the
chance to get their game on wherever they are thus accommodating their busy
schedules. The league, operated by the Global Gaming League, is now in its
second season. Here are some of the features of HHGL:

1) Snoop Dogg is the commissioner of the league.

3) NBA2K6 was the official game, launched a the start weekend in February 2006

As the videogame industry heads full force
into the next generation of consoles and rapidly improving technology, hip hop
will, undoubtedly, remain firmly rooted in the culture.