Losin' It: 7 Rappers Who Eminem Dissed More Than Once 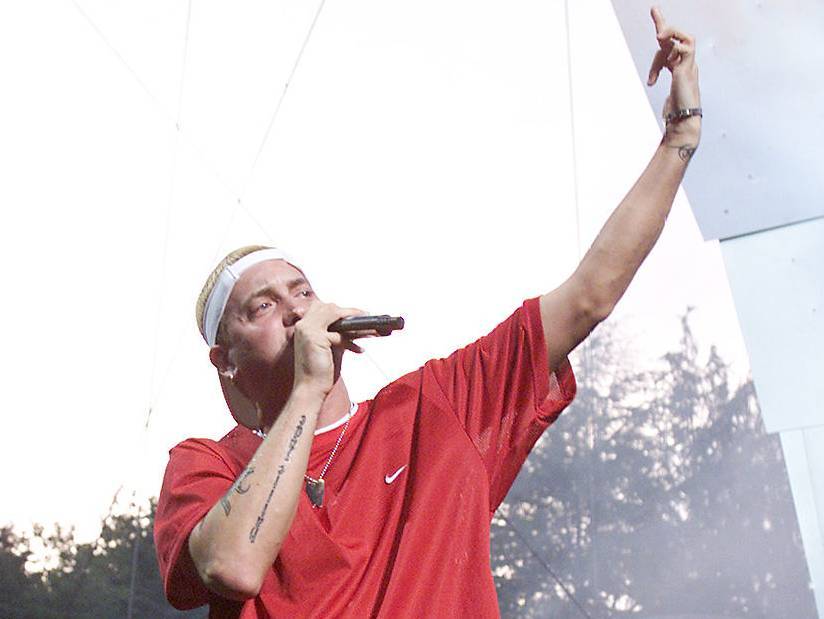 With the help of the Beastie Boys breaking down the barriers, the man known as Marshall Mathers can be credited with widely changing the perception of white boy rappers in mainstream Hip Hop. Prior to the real Slim Shady committing his verses to wax, white rappers were often dismissed due to the likes of Vanilla Ice and Marky Mark.

Part of the reason Eminem changed the perception of white boys in Hip Hop was because he, quite simply, brought all the smoke. Anybody and everybody could get it from Em, and sometimes, more than once.

Here, then, is a list of rappers who felt the wrath of Eminem more than once.

As Eminem was slowly, but surely, starting to make his way into the pop culture zeitgeist, underground rapper Cage was running his mouth to anyone and everyone who would listen about him. Put simply, Cage claimed that Eminem bit his entire style, and that he owed him more than a little bit of debt for his success.

Eminem didn’t take kindly to the suggestion, and proceeded to drag him for blood, filth, bone and slander on “Role Model” from The Slim Shady EP and on the hidden gem “Drastic Measures” featuring Indigenous Tribe.

There are few things that Eminem loves in this world more than his daughter Hailie, and the former House of Pain capo found out the hard way that one needs to leave children out of beefs. When Everlast popped off against both Em and Hailie on a remix of “Ear Drums Pop” by Dilated Peoples,

Marshall Mathers unleashed all hellfire on “I Remember” (where Everlast’s heart troubles came under the microscope) and finished the beef with the release of the D12-bodied “Quitter.”

It’s hard to believe that Eminem would have a fight with a group of rappers who wear clown makeup and spray “cheap soda” on their audience, but here we are. ICP’s beef with Em goes back all the way to 1995, when — of all things — ICP didn’t want to come to Eminem’s release party for The Slim Shady EP. Eminem drew fire against them on several songs, including “Get You Mad,” “Till Hell Freezes Over,” and “Marshall Mathers.”

After the Insane Clown Posse (really, though?) weakly returned fire on “Nuthin’ But A Bitch Thang” and “Slim Anus” they squashed the beef with Eminem in 2012.

Nowadays, it’s almost obligatory to roast Ja Rule because of the Fyre Festival “that’s not fraud, it’s false advertising” nonsense, but back when Jeffrey Atkins was nothing more than 50 Cent’s favorite punching bag, bringing Eminem in for a tag-team match on the “It’s Murda” rapper seemed, well, unfair. But for the most part, even though Fif was his affiliate, Em chose to stay out the battle between the two Queens natives — until Ja stupidly dissed Hailie Mathers at the end of “Loose Change.”

When Ja implied that Hailie would grow up to be a crackhead and a whore, Eminem went absolutely bonkers on him with tracks like “Doe Rae Me (Hailie’s Revenge),” “Bully,” “Bump Heads” and “Hail Mary.” If 50 Cent put Ja Rule on the turnbuckle, Eminem piledrove him into the mat, and that one-two punch is credited with contributing to the ending Ja Rule’s rap dominance.

Canibus and Eminem came up around the independent rap circuit together, and for a while, it looked like Canibus was going to break out long before Eminem ever would. But then, Canibus dissed LL Cool J, who fired back with “The Ripper Strikes Back.”

When Canibus implied that Eminem ghost-wrote the lyrics to the song (which, to be fair, seems like a compliment), Eminem fired back with several diss tracks, including “Square Dance,” “When The Music Stops,” “Say What You Say,” and on his guest verse on Xzibit’s “My Name.” Catching the smoke from both LL and Em ultimately deaded Canibus’ career in many fans’ eyes.

Back in 2015, Colson Baker decided to tweet Hailie Mathers was “hot as fuck,” but he tried to soften the blow by saying he meant it “in the best possible way, because Eminem is the king.” Needless to say, this did not go over very well with Em, and he allegedly started getting MGK banned from several radio stations. When Machine Gun Kelly whimpered that this was “bad for his career,” Em gave him the old what-for on the song “Not Alike.” MGK responded with “Rap Devil,” which prompted Eminem to drop “Killshot,” which broke a high-profile YouTube record.

The beef with former Source Magazine CEO Supreme Chancellor Benzino is, perhaps, the best known and most long-standing beef that the Detroit rapper has had. The roots of the fight date all the way back to 2000, when The Source gave The Marshall Mathers LP a 4-mic rating (instead of heralding it to match the universal critical acclaim) and a battle of bitterness was born.

In 2002, Benzino went into the Hot 97 studios in New York City, then released a diss track against Eminem over Nas’s “Made You Look” beat. He subsequently released a song called “Pull Your Skirt Up,” which was also an Eminem diss track.

Even though Em waited two months to respond to “Pull Your Skirt Up,” he responded with an entire mixtape (!) of diss tracks against Benzino and The Source. Titled The Invasion, Eminem subsequently went on Hot 97 to diss Benzino. After Em’s appearance, Benzino’s songs started disappearing from the radio.

Benzino then released a whole issue of The Source dissing Eminem in January 2003. Eminem responded to this level of pettiness — and journalistic malfeasance — with the songs “Go To Sleep” and “We All Die Someday.” In 2003, Eminem released The Invasion 2, another mixtape that took aim at Benzino and The Source.

After breaking his Source Award onstage at Hot 97’s Summer Jam, it was pretty much agreed that Eminem not only destroyed Benzino’s career, but he — along with Kim Osorio’s brutal Straight From The Source memoir — also helped bring down The Source Magazine.