Review: "Before Anythang: The Cash Money Story" Is Poignant But Skimps On Details 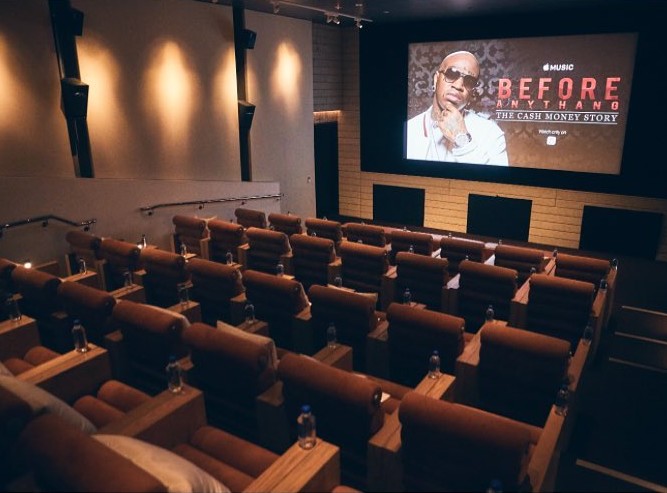 For the last couple of decades, Cash Money Records has been the bedrock of the Hip Hop industry, launching the careers of icons like Lil Wayne, Drake, and Nicki Minaj. The highly anticipated Apple Music documentary, Before Anythang: The Cash Money Story, tells the origins of the $300 million dollar label started by two NOLA brothers Birdman and Slim.

At the first part of the expected trilogy’s Hollywood premiere, which was directed by Clifton Powell, Birdman was accompanied by heavy-hitters Jeffrey Harleston, the Universal Music Group Vice President who assisted in turning Cash Money into a powerhouse, and Larry Jackson, the Apple executive spearheading the industry’s streaming future.

Also in attendance was former NFL star and activist Colin Kaepernick. The screening coincided with Birdman’s 49th birthday, making the premiere of this retrospective film more poignant and timely.

(Colin Kaepernick, Birdman, and Larry Jackson at the Hollywood premiere of Apple Music’s Before Anythang: The Cash Money Story. Courtesy of Apple Music)

Before the movie started, Birdman took the microphone to thank his partners at Universal and Apple. He joked about his decades-long relationship with Universal, “If you have a dog long enough you’ll learn to love it and I’ve been working with these people for my whole life!” For someone who has accomplished so much, selling over 1 billion singles and 200 million albums, he was humble, stressing that everything he does is a team effort and “it ain’t one man’s accomplishment.”

In regards to the future of Before Anythang, he was light on any specifics about the release of the next parts, stating that the sequel will premiere sometime in August and even hinting that it could go beyond a trilogy. This installment is both compelling and leaves much to be desired, revealing the first chapter of Birdman’s epic story and ending with a cliffhanger about the rise of Cash Money. Narrated by Birdman and featuring candid interviews with friends, family members, and colleagues, it doesn’t hold anything back, divulging details about Birdman’s father’s gambling habit, his parents’ untimely deaths, and his early run-in with the law living in the 3rd Ward of New Orleans. Notably, the hour and fifteen-minute film successfully builds up anticipation for Cash Money’s heyday, with many of the interviewees saying that in his formative years, Birdman was a hustler with foresight and ambition. But Before Anythang is vague on how exactly Cash Money got off the ground. Right after Birdman and Slim sign a monumental deal with Universal, there’s a montage of Hot Boys performances and victorious interviews.

It then cuts to black: To Be Continued…

(Birdman at the Hollywood premiere of Before Anythang: The Cash Money Story. Photo courtesy of Apple Music)

At the lively party following the screening, right before posing with an extravagant Cash Money cake, Birdman treated the crowd to another triumphant speech. Like other middle-age moguls, he’s concerned with how he will not only leave his legacy to his children but also pass down his unique business acumen, explaining how the music industry is a “sharp game and if you don’t have your shit together, you could fall short.” He then ended his speech with an enthusiastic salute to his family. “Cash Money Rich Gang, bleh!” The entire room erupted with cheers and bird calls. Despite all the speeches, none of the insiders dared to address the Martian elephant in the room — what’s going on with the much-reported dispute over Lil Wayne’s Tha Carter V? What’s the update on the infamous feud between Baby and Weezy?

Hopefully, when the second part to Before Anythang premieres in August, fans will have some much-needed clarity and Tha Carter V playing on full blast. Though we will have to wait and see whether Birdman addresses the Weezy drama in the following installments, the first part to Before Anythang is less about Cash Money’s scandals and more about offering an intimate glimpse into Birdman’s life before he was a legendary mogul. It’s certainly worth a watch for anyone who ever wondered what it takes to act on ambition and build a brand that can last decades.