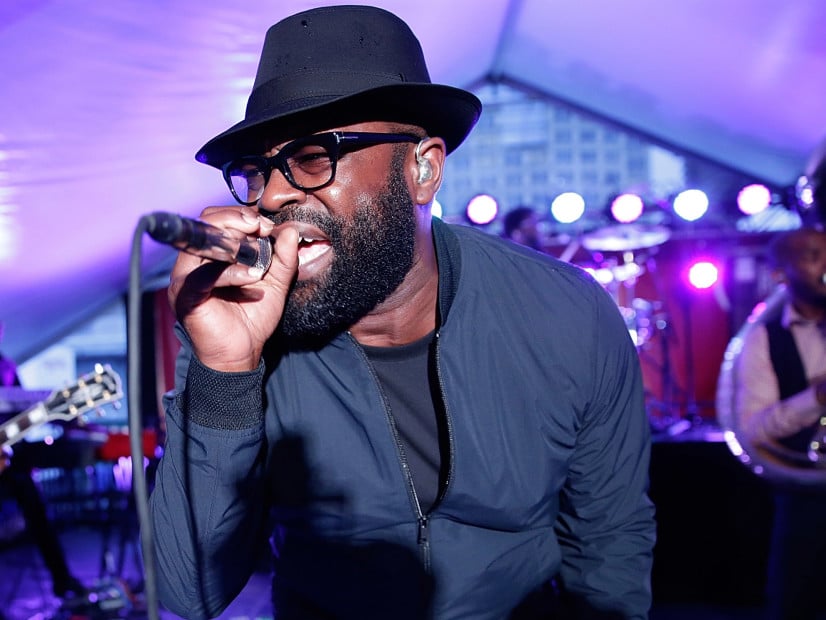 When Black Thought broke the internet with his astounding 10-minute freestyle on Funk Flex’s Hot 97 show, it reminded critics and rap fans why he deserves a spot on their Greatest MCs of All-Time list selections.

But if you’ve followed Tariq Trotter’s career since The Roots released their debut album Organix in 1993, his epic freestyle shouldn’t come as a surprise. His intense energy onstage, flammable rhyme style, battle-ready prowess, and intelligent lyrics have always garnered the praise of high-profile fans like Diddy and his main inspiration Rakim.

To review (and introduce to some) his status as a rap titan, here are our picks for Black Thought’s Top 5 greatest verses throughout his 25-year career.

Over Questlove’s echoing snares and a chunky bassline, Common and Black Thought engaged in friendly competition so that “UNIverse At War” could live up to the song’s title. Black Thought doubled down on Common’s rhetoric from his 1995 classic single “I Used To Love H.E.R.” and bodied the track in his second verse with a prescient rhetoric like a sage regarding the discourse of the rap industry’s direction with drug-induced raps going into the new millennium. (“The turn of the century, the planet’s like a penitentiary/Exaggerated, niggas is living highly medicated/I used to love H.E.R. but now she violated/Hip Hop Holocaust and camps, old champs are concentrated/They outdated and incarcerated/Love and appreciated and very debated/Forever career created was eliminated/And that’s the way the balance of yin and related.”)

Both MCs spit two verses each, and Common’s final verse played clean-up on the track, but Black Thought crossed the figurative finish line faster than his fellow Soulquarian.

Black Thought’s unrelenting cadence and technically crafted rhyme couplets sprint along with the 116 BPM instrumental of “Web,” rocking nonstop for over three minutes is like a legendary old school park jam where the scene is set for breakdancers getting sweaty on linoleum tiles. Thought annihilates the beat with lines that give fair warnings to any of his would-be challengers on the mic. (“Young chump you could choke off the web I spun/I done cleared ’em out from the threat I brung/You done heard about what set I’m from/ My nigga, word-a-mouth little rule-a-thumb/Y’all better bow down when the ruler come”). Like a deadly tarantula, you don’t want to catch his venom as his spins his verbal silk.

The promo campaign for The Roots fourth album Things Fall Apart caused a fever pitch of anticipation among their fans and across the music community in late 1998. When it dropped in February 1999, it was love at first sound for fans who bought the album because of the first track “Table of Contents, Pt. 1” gave an instant feeling that the album lived up to the hype. Black Thought’s verse was like a locomotive pulling out of the train yard going full speed ahead with ambition to turn the Rap game on its ear (You’re now in tuned to the sounds of the/R to the double-O to the/ T-S, and I stretch limit to this profession/My voice physically fit, tracks I’m bench-pressing/The mic chord is an extension of my intestine/Delicate MC’s sliced in my delicatessen/My mind state is that of the S-P/Connection, Pennsy a part of me, South Philly through my arteries).

This is also where Thought asserted The Roots’ earned nickname as “the hardest working band in show business” when he stated, “The world traveler in the flesh without question/Last seven years on tour without restin.”) For the remainder of the track, Tariq delivers his sharpest bars akin to a needle connecting with a stitch to meticulously sew its way through every thread and fiber.

Although the album was titled Things Fall Apart, this lyrical onslaught was beautifully constructed to set the tone for the rest of the classic album.

When The Roots critically acclaimed, gold-selling sophomore album Do You Want More?!!!??! was released in 1995, The Roots were dubbed as “alternative rap” or jazz rap because their sound arrived after jazz rap’s popularity waned in the mid-nineties. Neither were their live instrumental passages and scatting conventional to the gangsta rap nor East Coast rap’s sample-heavy soundscapes with 808 low-end thumps and boom-bap drum machine programs. But on “I Remain Calm,” one of DYWM’s best cuts, Black Thought threw those standards out the window.

Following Malik B’s initial verse, Black Thought ascended the track tenfold with his fusillade of unmatchable bars and frenetic multisyllabic wordplay over Scott Storch’s groovy keyboard melody, Hub’s thumping bassline, and Questlove’s mid-tempo drums. This song’s concept was about being all peace, but this was Black Thought’s fight for respect to place him among the best rappers in the mainstream and underground during Hip Hop’s most pivotal decade.

As the first single from Illadelph Halflife, “Clones” personifies a true rap album’s quintessential posse cut, MCs M.A.R.S., Black Thought, Dice Raw, Malik B dropping their jewels in that order. In most posse cuts or rhyme cyphers, it’s usually the most revered MC hitting the figurative walk-off home run. It wasn’t that way in this case. To match the canon-exploding bass drums and machine snare chops, Black Thought’s verse came second and he sounded like a seasoned veteran armed with the best artillery to excoriate hardcore and flossy rappers alike during the Jiggy era. (“I told you I’m the rap predator/You insist to imitate, what for?/Superstar niggas is ten percent real, ninety percent invented for a fuckin’ record deal/Comin’ with somethin’ veterans can’t feel/I hit you like a steel anvil/Because you grifted off the next man’s skill/But still I remain mellow, seein’ the theatrics of Othello/Run over tactics like the PLO/ The C-L-O/N-E-S fess/The phoniest cats is felonious”).

Where else are you going to get metaphors to Palestinian army war tactics and wack MCs as Shakespeare play actors in the same breath? The track’s last two MCs Dice Raw and Malik B came with hefty lyrics to the table, but all jokes aside, they became mere afterthoughts following Tariq’s power play.

Hold up, stop, wait, reverse the tape. Because who really gives a f*ck about just five Black Thought verses??? Peep these honorable mentions down below.

Following Raekwon and Joey Badass verses on Statik Selektah’s uplifting gospel choir-sampled beat, this verse from Black Thought helps anyone’s argument that he’s the G.O.A.T. on the mic. Black Thought rips the door open and slams it shut for final two minutes of “Bird’s Eye View.” With spiritually enlightening and braggadocio lyrics (“It’s the elephant in the room/Created by a collision of the sun and the moon” and “the most notorious, Poet Laureate/Whole story is glorious, stoic warriors”).

Thought’s voice in rare raspy form with a detailed life experience make you feel like he’s roaring out holy scriptures from the pulpit that gives you a new lease on life and has your back in the process of his inimitable sermon (“You got a couple homies down to catch a homi- for you/Well I’ma fold niggas into origami for you”).

No wonder Black Thought considers himself “the reverend” in several of his previous verses. Church!

During the recording of DJ Premier and Royce Da 5’9’s 2014 HipHopDX Album of the Year-winning, Prhyme, Black Thought was slated as the featured guest on “Wishin,” one of the project’s most powerful songs. According to Preemo’s intro, Black Thought bowed out to mourn the death of The Roots’ longtime manager Richard Nichols and was ultimately replaced by Common on the original track. A year later when the remix was released, the Philly legend claimed that he was a “Nobel Prize winner for novelists,” invoking a wounded soldier who returned to battle with a vengeance to complete the mission.

Muscular lyrics in his verse like “Post-traumatic stress, I wear it as a family crest/I murder at its best, words that’ll manifest causing cardiac arrest/Budapest to Marrakesh, my slang Bangladesh/My gang’s Clarence X, I’m life after death, the last Levine X/Lettin’ every other rapper know they better wear a vest” showed that although he is harmonizing medleys on The Tonight Show, this is a prime example that Thought is a monster forever rooted in the art of MCing (every pun intended).

Hip Hop’s New York-to-Philly connection has been strong since the culture’s infancy during the seventies and early eighties. Ghostface Killah and Black Thought joined forces to represent their respective hometowns and drop bombs as older gods on “In The Park” from Tony’s 2010 album Apollo Kids. Both legends jumped on the track in a rage over the wailing, crunchy guitar sample to take it back to the old school with echo chamber vocal effects. For the track’s final two minutes, Black Thought threw fiery bars on parade to give homage Philly’s role in Hip Hop history and unsung heroes like Schoolly D, Lady B, its excellence and influence in the arts of graffiti and DJing, and street warfare in all sections of the City of Brotherly Love.

When taking the incredible display of lyricism into consideration, it’s understandable why Thought told DX in 2015 that he considers this guest verse as his most favorite to date.

In the liner notes of Phrenology, Black Thought gives thanks and praises Kool G. Rap & DJ Polo’s 1989 revered album Road to the Riches. One of the album’s standout songs is “Men At Work” where G. Rap obliterates a drum beat sampled from The Incredible Bongo Band’s iconic single “Apache.” As an homage to one of this rap inspirations, Black Thought revamped the underground classic with his own version that has a variation of the crunchy guitar loop and record scratches from “Men At Work.” Although he doesn’t rhyme as fast as G. Rap on the original version, Thought wrecks the track with lyrics such as, “Yo here go the rapper of the year, year of the rap/Come from South Philly where the hammers are clapped huh?/Violate and you will answer to Black/You a thug not really there’s the answer to that.”

He also equated himself to superheroes Aquaman and Brown Hornet, a self-referential way to detail his fluidity and humor on this song that could blow the roof off any house party.

Shortly before his untimely death in 2000, Big Pun was renowned as an MC who could upstage any rapper who featured him on their songs. When it came time to produce Pun’s history-making debut album Capital Punishment, the Bronx legend only had a handful of featured guest spots that included Inspectah Deck, Prodigy, N.O.R.E., dead prez, Wyclef Jean, Busta Rhymes, and Black Thought.

The latter MC was handpicked by Pun to go toe-to-toe with him on the album’s third track “Super Lyrical” because he deeply respected Black Thought’s mic skills. It’s pure steel sharpening steel as both adept rappers minced this beat to shreds as Thought balanced out Pun’s compounded bars.