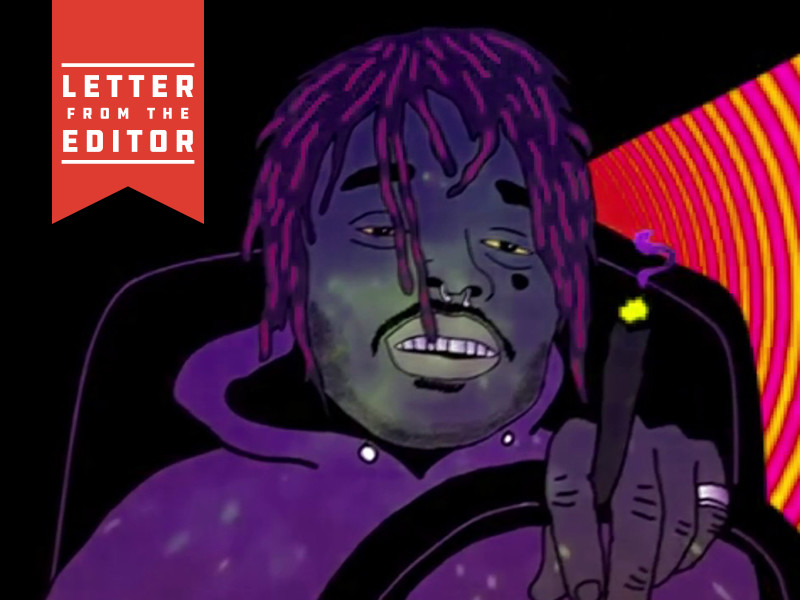 Today’s up-and-coming Hip Hop superstars are already facing a career crossroads before most of them can fully tour their debut albums.

Their fuel, this alleged pill-popping epidemic that has artists glorifying the role of the user instead of the gun-toting supplier on the corner, doesn’t seem so cool anymore.

Not anymore, now that the good times can prove to be deadly.

Sgt. Pete Dugan of the Tuscon Police Department is confidently speculating that buzzing rapper Lil Peep’s cause of death was a drug overdose, likely sparked by Xanax.

A scenario that’s hitting a little too close to reality for Lil Uzi Vert.

The purple-dreaded wonder was among the dozens of rappers to wish Peep off into the sunset in the wee hours of last Thursday (November 16) and he has since, at least publicly, attempted to wean himself off his own substance abuse dilemma.

“We Would love 2 stop ….. But Do You Really Care Cause We Been On Xanax All Fucking Year,” he captioned atop the photo Peep posted on Instagram that perceivably highlighted the trip that did him in.

Although nothing on wax or record suggests they were particularly close, the sense of peerage can be emphatically felt through Uzi’s recent Twitter storm.

Let’s not stand on ceremony here. This isn’t a leading rap generation known for their lyrical depth. The ethereal vibes and melodies have replaced witty wordplay and vocalized haikus. I’m not here to tell you it’s better or worse — it’s just different. We do know that fuel for much of today’s music does align with what the doctor prescribed, though.

Sex, drugs and rap ‘n roll. Recording under the influence is as old as the music itself. On the oft-forgotten The Show OST (circa 1995; some of you kiddos’ birth year), Method Man openly admitted he used his brain as a smoke ventilator when he said, “I can’t just smoke some regular weed and write, ’cause regular weed don’t fuckin’ … it don’t really do nothing for your thoughts and shit.

“When I smoke some headbanger boogie, some of that fuckin’ Hawaiian shit and all that other good shit? I be writing super, crazy, ill bombs…”

All this came before he proceeded to christen a lifelong partnership with Redman on the stupendously dope “How High.” In those primitive Hip Hop times, the grass was the inducer for MCs to “bomb atomically” and kick that crazy space shit that don’t even make no sense.

Flash forward to the present day and rap’s common-law marriage to R&B calls for more heightened senses of euphoria — a pleasure that over-the-counter prescription drugs provide a little too well.

As it stands, Lil Uzi’s “XO Tour Llif3” is by far my favorite commercial single this year. Unlike “Hotline Bling” — which sported nare notta rapping bar — I feel it should be brandished and celebrated under the Hip Hop umbrella and furthermore, should earn nothing less than a win for the Grammy Awards’ Best Rap Performance. He sounded amazing in all his Mumble Rap glory. Especially on the part when he goes:

She say I’m insane, yeah<br> I might blow my brain out<br> Xanny, help the pain, yeah<br> Please, Xanny, make it go away<br> I’m committed, not addicted, but it keep control of me<br> All the pain, now I can’t feel it<br> I swear that it’s slowin’ me, yeah
― Lil Uzi Vert – XO TOUR Llif3

If you were hypnotized to the point of paralysis from Uzi’s Auto-Tuned drawls, your Spidey-Sense would leave you to believe the separation from his girlfriend was turning his heart into syrup and he was frantically cupping his hands over his chest, in a last-minute effort to salvage his liquified organs.

All My Friends Are Dead: “XO Tour Llif3” marks Lil Uzi Vert’s biggest solo hit to date, peaking at No. 7 on the Billboard Hot 100 Chart and already getting certified 4x platinum in less than year.

But nah, he was talking about his love for pills. Xanax. Nothing more to see here, folks. Even the echoing “all my friends are dead” lines reeked of the kind of emotional duress that forces artists to channel that depression and not only create timeless material but inspire listeners to cope with their own troubles of isolation and what not.

But nah, he was talking about money. As in, dead presidents. It’s not exactly that “lettuce, stack cheddars, treacherous, all the et ceteras” shit, but again, this isn’t the era for that.

They are, however, very, very, dangerous lyrics for these times. Especially when kids are crowning and celebrating artists who are recording in their bedroom with joggers and cereal. Before labels, websites, tastemakers and radio programmers all have a chance to put a name to the MP3.

Just like the tragic tale of Lil Peep. They were just as many “who???s” as there were crying emojis being tossed around the internet in the wake of his passing at just 21-years-old.

And Uzi just turned 23 this past summer.

Sober 2 day I have been shaking.

I have been cursing my love ones out and fighting

In the studio with no thoughts in my head

Teeth biting down because I just wanna be angry at something ……

Censorship will forever be wack but the party’s over, tell the rest of the crew. Like Uzi suggested, you boys may just have to re-adopt the weed like those “old” guys. Lil Xan and Yung Lean should also invest in rap name generator software.

Until then, I’ll enjoy “XO Tour Llif3” for its exceptional music qualities and nothing else.