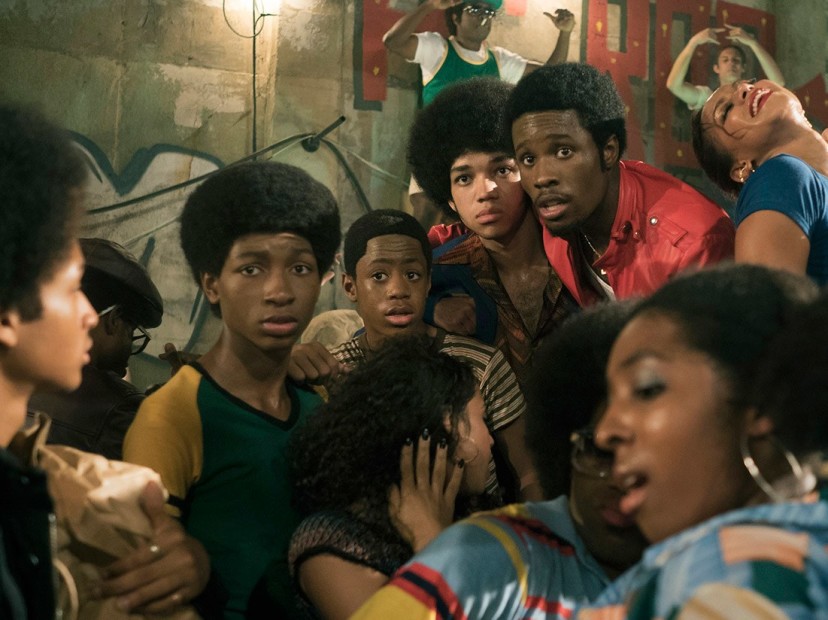 5 Things To Watch For In Netflix's "The Get Down II"

Cue up Netflix: The Get Down has returned.

When we last saw The Get Down brothers, they had just cold rocked a party to perfection in the South Bronx. Now, it’s a year later, in the fall of ‘78. Peep five things to keep an eye on in Season 2, which debuts TODAY on Netflix.

Season 1 saw the seeds sowed for the wistful romanticism between our hero, Ezekiel “Zeke” Figuero (Justice Smith) and his first love, Mylene Cruz (Herizen F. Guardiola). Their passion for one another can’t be doubted. How they’ll remain together as their paths diverge is another question. Sure, the adult Zeke on stage played by (Daveed Diggs, voiced by executive producer Nas) at the beginning of each show is backed by three R&B singers, but are they Mylene and her friends Yolanda (Stefanee Martin) and Regina (Shryley Rodriguez, or are they three other women entirely? The hint of regret and sadness in adult Zeke’s eyes as he tells his tale leaves a lingering doubt.

Toy Box: Is Zeke ready to share Mylene with the rest of the world?

Zeke has a promising internship in Manhattan and dreams of the college life, but given where he ends up, it’s likely that his mic dreams will supersede his campus desires. Meanwhile, as Mylene skyrockets to the top of the charts with her Disco talent, the hoards of admirers may stir up resentment in Zeke, who so intensely clings to Mylene. I don’t think they’ll break up this season, at least not for good. Though, the strain of her budding singing career and Zeke’s own artistic desires will be played out in Season 2 and will lead to the end for these two. Unless, of course, when Disco abruptly dies and Hip Hop takes off, their paths converge. Which brings me to my next point…

The Rise Of Hip Hop Culture

“The Get Down’s not a revolution,” Zeke said in Season 1. But oh, how wrong he was. The plates are already shifting in 1978 to create the earthquake that shook the musical world in the 1980s. One of the key factors in Hip Hop’s shift from the park to the studio was the change in focus from the DJ to the emcees. Right now Shaolin Fantastic (Shameik Moore), the fiery “conductor,” is the heart of the group. But remember, the legendary Grandmaster Flash, who is portrayed as Shao’s mentor in the show, played an integral role in creating The Get Down. Anyone who has ever read his memoir, The Adventures of Grandmaster Flash: My Life, My Beats, knows a major component of Flash’s story was his declining role in the music made by Grandmaster Flash and the Furious Five in the 1980s. While the DJ was reduced to a backup role, Melle Mel became the centerpiece. So expect a rocky transition, as the volatile Shao will resist giving up what he feels he engineered. Zeke is the wordsmith, and will eventually become the star. My guess is that won’t all go down this season, but that it will be foreshadowed as The Get Down Brothers record their first hit and maybe even sign a record deal. Of course, that may not be Shao’s only problem…

Just as Zeke has his internship, Shaolin has his main job: selling coke. He started out as an errand boy for notorious Bronx gangster Fat Annie (Lillias White), but he’s proven himself a top earner and is now slanging the white powder all across the borough. The old adage of the drug game is that it leads down two roads: death or prison. Shao is nowhere in sight during the 1996 portion with Zeke and the adult singers, and my take is that he probably ends up dead. Shao is smart, but he’s also explosive, and that will be his downfall. Again, it’s too early for that to happen now, but it might happen sooner than the end of the series. His friction with Fat Annie’s swaggering son, Cadillac (Yahya Abdul Mateen II), will play out this season and land Shao in hot water. Of course, he’s not the only one who may fall from the top…

In ‘78, Disco Fever was burning up the clubs. However, we all have seen the images of 1979’s infamous Disco Demolition Night at the Chicago White Sox’s old Comiskey Park. Just two years before, the stadium held a Disco Night, but public opinion turned against the gloss of Disco, or “the wackness,” as Shao puts it, very quickly. What will become of Mylene as Disco dies? She’s far too talented and driven to let her career die with it, so my guess would be she transitions into R&B in the ‘80s.

Chemistry: Mylene’s mentor Jackie Moreno (played by Kevin Corrigan) experienced redemption when he sparked her career. Will it be enough for him to stay alive like the Bee Gees?

Not even her father Ramon (Giancarlo Esposito) a fire-and-brimstone preacher who is staunchly opposed to secular music, will be able to stop her. For Season 2, though, Mylene will continue to thrive as one of music’s rising stars, all while an affair goes on right under her nose…

Cruzin’ For A Bruisin’