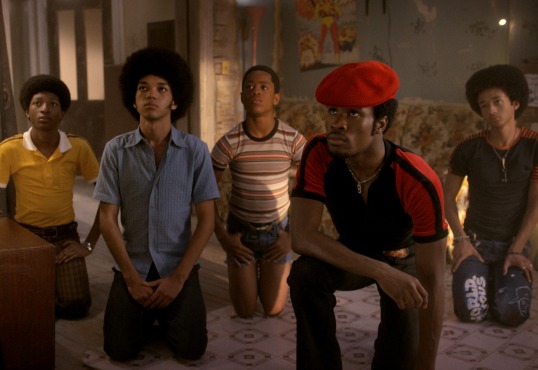 Today is such a glorious day for Hip Hop.

One day removed from the culture’s 43rd birthday, Netflix has pushed the go button on its much-anticipated series, The Get Down, which chronicles the imminent rise of Hip Hop and its accompanying pillars at a time when the disco era was losing its luster.

In a recent interview with HipHopDX, Nas – who serves as executive producer with series creator Baz Luhrmann — described how his role demanded a bit of homework on the “politics and community side.”

For two of the cast’s younger and brightest stars, Shameik Moore and Justice Smith, the joy of learning came all but mandatory as these two weren’t exactly living in contrast to the period piece’s was set timeline. Yet and still, there was a tremendous amount of excitement for both to take on their roles, evidenced from their resolve on the grueling press day they endured for the Television Critics Association 2016.

Which is where we caught up with the two of them. Read about their experiences on set ahead of watching the first six episodes of the show on Netflix.

HipHopDX: I like The Get Down because more so than anything, it represents culture. I think without culture, Hip Hop isn’t anything and I think that’s the soul, the nucleus of it. Explain about shooting The Get Down and what being absorbed by the Bronx culture meant to you guys.

Shameik Moore: I think it’s a privilege to be able to learn from Grandmaster Flash, from Lady Pink and Nas, Kurtis Blow. I don’t think a lot of people, especially in our generation, are able to learn from the people that started what it is that we love. That’s what it feels like. It’s an honor.

Justice Smith It’s essential to know the origin of the most affluential entity of today, which is Hip Hop. Does that answer your question? (Laughs.)

HipHopDX: It does. I know you guys had to do a lot of back research, listening to people talk opposed to learning the script, or learning the characters personality. There was more elements, more layers to that. Introduce your characters.

Shameik Moore: My character Shaolin Fantastic is the lady-killing romantic. He’s a DJ. He embraces everything that is the culture of Hip Hop. He starts out as a graffiti artist, then becomes a DJ, and he was already a B-Boy. He’s able to rap and he shows that a little bit but he’s leaving that to his boys as of right now.

Paid The Co$t To The Bo$$: The already critically acclaimed series took on Netflix’s biggest price tag to date with a $120 million ($10 million per episode) budget.

Justice Smith Yeah, I play Ezekiel Figuero. He’s this smart, sensitive kid who’s a poet turned rapper. He’s lost in the world and doesn’t really know what to do with himself and then he finds a voice through rhyme which becomes Hip Hop because Shaolin leads him down that path.

HipHopDX: The Shaolin Fantastic name, is that from any early Wu-Tang Clan origins or the actual kung-fu movies?

Shameik Moore: I don’t know about Wu-Tang but Shaolin came from…there’s a backstory on how he got his Shaolin name which I’m not sure Baz would be ok with me talking about but Shaolin comes from movies, like karate movies and stuff back then. Breakdancing was inspired by these movements. All of these like kicks and the floor moves and stuff, that’s breakdancing. That’s the early days of ‘70’s Hip Hop. Anyways, Shaolin’s name comes from that.

Justice Smith I think that’s where Wu-tang comes from too.

Justice Smith Have you heard the song “7th Chamber?”

HipHopDX: But, of course.

Justice Smith: I listen to that song a lot. To get accents down.

HipHopDX: That’s the backstory of the culture I’m talking about. You have to put yourself in a mind state in an era where you weren’t alive.

HipHopDX: Me either, man. Absorbing into these characters to create a project like this, would you guys say you got an incredible understanding of how Hip Hop became this global phenomenon?

Justice Smith It had a definite purpose when it first started out because of all this violence and drugs and shit. It was this art form to promote positivity and there was no career in it. These kids were doing it just because they like doing it. They loved what they were doing and they wanted to have a good time. “Peace, love, unity, and having fun.” That’s what it was about and then it became what it is today. There’s always sub-genres of Hip Hop now and all this kind of stuff. Everyone has a mixtape and everyone’s trying to make it but it’s just cool to see kids do it for the love of it and not think of making it.

HipHopDX: Yeah you know obviously people want to figure out ways to make money off it and everything. In your opinion, should it go back to this pure state about love or how it is known, about pure talent?

Justice Smith: I think it’s okay to have the business involved with it but I think, we here, rappers and people in the music industry say they get in it to take care of their family, or to get money, or to get out of their problems and everything. Everybody wants that but to start expressing yourself like this for that purpose is not really what I admire and I don’t admire anyone that does it that way.

Personally, I’m in this industry in general, not because of the check we’re going to receive after The Get Down but because I wanted to do this. I enjoy being on set; it’s the same way. I like being in rehearsals, and I like being on set because I’m doing what I want to do. If I don’t like that, I would hate my life and be complaining all the time. You have actors and actresses — you know there’s a lot of complaining going on. It’s different when you really want to be there.

HipHopDX: Lastly, The Get Down is rooted in nostalgia and it’s not like it’s going to progressively change anybody’s thinking or anybody’s preference of music or style, or lifestyle but what would you guys say the biggest takeaway is? Especially for a younger viewer.

Shameik Moore: A lot of people are ignorant to what the facts are about how hip-hop started. Where we come from, culturally, I think a lot of kids are going to watch this show and be like “I do that, I do that” you know? “I’m not confident to stand up in class, or read my poem but I do have the best poem because I’m naturally like that.” That dude that’s going to start breakdancing to help his best friend because everybody’s getting on him. You’ll be able to connect to that stuff. But right now, it would be like hitting the ‘nae-nae.’ We got our own take on it but we want people to know where it came from.

Justice Smith I agree with that. I think now we’re starting to see more rap in hip-hop that reflects what we were talking about in the early days like the linguistics of it, about the poetry of it, and about promoting something that’s positive. I now Kendrick Lamar, his album was so influential because he was talking about this was what I went through, and these are my struggles, and not romanticizing them and like idolizing what he had to go through he was saying “this is fucked up, what I had to do.” We’re seeing more and more of that which is great and I think when the show comes out we’ll see more stuff like that continue to happen and a lot of people will be doing it for art’s sake and not really for the opposite.

HipHopDX: I was listening to this new hip-hop playlist on iTunes or Apple Music and every song and every rapper was getting a check, literally saying the word check. We have direct deposits, we don’t even have checks anymore. So essentially what you’re saying is The Get Down will make people inspired to do it for the art instead of the check?

Justice Smith (Laughs!!!) Yeah, I mean that’s what the show’s about.