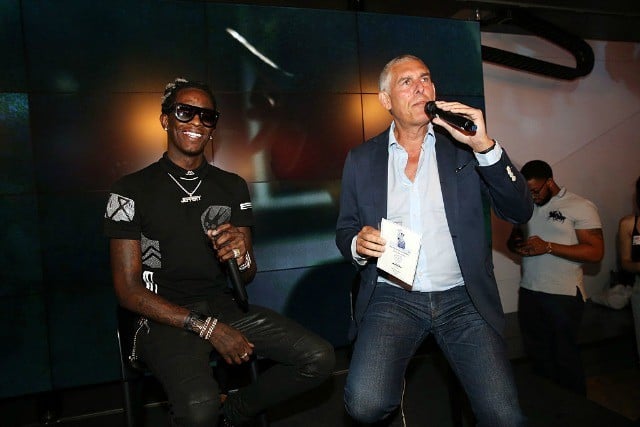 Young Thug: Yes, His Drag Imagery Is Meant For Exploitation

In 1986, Profile Records released a record from Queens, New York duo The Showboys called “Drag Rap” (a.k.a. the “Triggerman” as you may recall from Bun B’s memorable lyric that ends Jay-Z and UGK’s 1999 classic single “Big Pimpin’”). The single was a flop in both the New York and Los Angeles markets that ruled the rap landscape. Although, it burgeoned the Southern bounce subgenre as we know it today. Today, artists like Big Freedia, Jaden Smith, Young Thug personify “drag rap” to the fullest.

Personally, I don’t like any imagery in Hip Hop that is exploited as art for profit. I understand the bottom line is to gain eyes for marketing and promotional purposes. Plus, I completely understand that messages in Hip Hop will never be monolithic.

Longtime rap impresario, 300 Entertainment label co-founder, and Young Thug manager Lyor Cohen is the master of exploitation that knows how to push image beyond lyrics. Just remember that most of the listening public is not cerebral enough to want to “understand” the nature of the hypebeast over at 300 [Entertainment]. During a recent interview, he stated his reasoning for his favorite artist to be featured in a dress for his new Jeffrey mixtape cover.

“Because it’s powerful images of what makes someone ‘Young Thug’ and what makes the evolution in how someone is ‘Jeffery.’ It’s a circular thing. It’s important…Please allow us to segue and utilize his name going forward. Because it’s important.” — Lyor Cohen

No, My Name Is Jeffrey explained this further:

Jeffery explains why he changed his name from Young Thug to Jeffery.

Whoever is a rap purist seeing the 25-year-old Young Thug (sorry, “No, My Name Is Jeffery”) looking like he’s a character in Memoirs of a Geisha House for the already infamous Jeffery cover art, this shouldn’t be a shock to you if you ever danced, spun, or enjoyed a rap record that shot up the Billboard charts during the past 20 years, at the very least.

The beauty of rap music is that the formulaic production sounds of 808s, snares, hi-hats, and bass have stood the test of time 30 years. The imagery in Hip Hop culture has seen various seismic shifts for what we deem as palatable. In Russell Simmons’ 2002 autobiography Life and Def: Sex, Drugs, Money, and God, he defined Hip Hop as “the most homophobic” culture in the music community. That was 14 years ago when the New Orleans post-bounce genre that Cash Money and No Limit Records had championed the radio airwaves, and well before the city’s “sissy bounce” audience had seen the light of day in the mainstream. The “Ice Age,” or “bling” era in rap was based on an image to push artists forwards beyond their lyrics alone to the top of the charts.

Full Circle: When fans say they want the “real Hip Hop” back, this is what they mean, even if they don’t know it.

But can we blame New Orleans or Southern rap for this evolution of lyrics taking a backseat to the imagery and exploitation of artists? Not at all. Musically, the “Jiggy Era” that was popularized by Bad Boy Records and Puff Daddy’s artists rocking shiny suits to match the flashing lights in Hype Williams’ colorful cinematography during the late 1990s that was worthy of epileptic seizures to push these artists’ stock in the music industry.

But we can even start beyond that as well. We have moved beyond the sentiment of gay-bashing since Kanye West told us on his MTV interview with Sway in 2005 to stop the gay-bashing in Hip Hop. He has even worn a leather skirt, or kilt, at his shows in the past few years, and it’s all for shock value. Exploitation is what blurs that line between what is considered subjective, abstract art and what is conformity to sells records and make big profits.

Remember Dennis Rodman dressing in drag during the 90s and hair-dye jobs that got him his own Rodman World Tour on MTV when he was one of the focal points of the Chicago Bulls second three-peat from 1996-1998?

Worming Out: Rodman was known for his flamboyant antics for much of his NBA career. He was also known as a champion.

The same rules apply when pushing artists today like Lil Yachty who looks like both Raggedy Ann and Andy and is serious about not taking himself seriously while shunning lyrical prowess as a standard bearer for a rapper’s pedigree because he’s making money and doesn’t want to be broke.

Rap is already the most post-Modernist genre that we have seen in the past 50 years. Graffiti Rock TV show creator Michael Holman once stated in the 2004 VH1 documentary And You Don’t Stop: 30 Years of Hip Hop “That’s what Hip Hop is all about. Its really ‘look at me.’” Social media blogger DJ Akademiks tweeted about the shock value for the formerly-Thugger’s album cover.

Yall still get surprised by Young Thug wearing dresses…. that was like def 2 years ago.. the shock factor wears off…

Furthermore, you may even consider this as a mea culpa in doing so for why Hip Hop has gotten to this point. But according to edicts of Hip Hop culture, can this Jeffery mixtape cover and his Calvin Klein billboard wearing a dress, the androgyny of today’s rap artists like Prince (Rest in Purple) championed during his career, or a Big Freedia TV show marathon on a lazy weekend afternoon on FuseTV even be considered Hip Hop? Well, if you reacted to it in any way on social media, or talked about it, it made you look like that Nas classic. Like Stretch Armstrong said in my recent interview with him and Bobbito, “you can’t be mad at the student— it’s the teacher’s fault.” You have to objectively review the eras that Jeffery was reared in.

That’s half the battle won by the provocateur. Image is everything, and like the adidas slogan, impossible is nothing in Hip Hop.