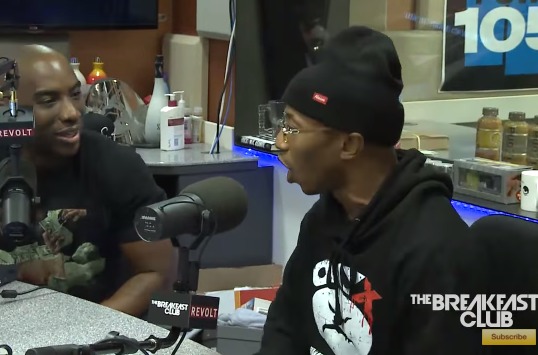 Giving them the shortest interview in their five-year history, Birdman walked off of The Breakfast Club today, April 22, after going in on DJ Envy, Angela Yee and Charlamagne Tha God. Apparently, the Cash Money boss had a chip on his shoulder regarding some comments made by the crew in other interviews.

Anyone who has followed the syndicated radio show knows that Power 105.9’s flagship series has had its fair share of controversial interviews that have led to near-violent confrontation, disrespect and even tears (that became meme gold). With that in mind, allow DX to count down the most lit interviews in the show’s history.

This 2014 confrontation between Charlamagne Tha God and Fredro Starr was so iconic, a picture of Starr is now at the top end of the show’s “P.O. Meter” that gauges a guest’s anger. Charlamagne started pushing Starr’s buttons by referencing a comment Starr had made previously about allegedly receiving oral sex from Moesha co-star Brandy.

Several minutes later, Fredro claps back by bringing up Charlamagne’s on-camera run-in, asking, “Charlamagne, what happened when you got punched in the eye, B?” and then the two debate the finer details of an altercation that happened between Fredro Starr and 50 Cent at The Source Awards.

Charlamagne defends his position while avoiding the fade, explaining, “I’m not here for that” while Starr gets more and more agitated, dropping some wild quotables — including “My name is Fredro Starr. Do your Googles” — as Sticky Fingaz and the rest of the team try to turn down for what.

This 2011 interview saw new life in 2015 when a screenshot of Lil Mama crying in it went viral. Charlamagne starts hammering her with insults early in the conversation, opening up by calling her “the voice of the young struggle face,” explaining, “It’s ‘cause you’re young but you got an old face.”

The barrage of insults isn’t what sets off the tears though. It was the memory of her late mother that brings on the waterworks, but the Internet has never let sympathy get in the way of a good meme.

No Limit founder Master P showed that there are some limits to what he’ll tolerate in an interview in January 2015. Charlamagne references Mercedes’ “fat ass” on her 1999 Rear End album cover and P immediately checks him, saying, “Don’t talk about Mercedes like that.”

C Tha God attempts to move on, but P keeps coming back to the subject. “I’m not gonna talk about your sister, your mama … I know you do your radio thing, and I respect that, but at the same time, Mercedes is a female … It’s about respect. Charlamagne, you know me and you go back. When we talk about women, I ain’t gonna disrespect no hookers or nothin’ ‘cause I don’t do that. I’m a man. And I don’t want nobody to disrespect no people that I know.”

R&B star K. Michelle made it clear she didn’t appreciate co-host Angela Yee discussing her, uh, alleged feminine odor, with Uncle Murda on a March 2016 episode of the morning show. Michelle dismissed the second-hand allegations that Murda made about her “stink coochie” (his words, not ours), but chastises Yee for talking about them, especially days before Michelle’s album was dropping. “I know you want ratings, but as a woman you should have known better and at the end of the day I’m not fucking with you,” Michelle barked on Yee.

In a rant-filled interview from March 2015, Dame Dash was visibly annoyed by yet another interviewer asking him about Roc-A-Fella Records co-founder Jay Z. “If somebody asks you the same questions 25 times, maybe 2,500 times, do you still want to talk about the same thing? That’s just me being human. I don’t care what platform we’re on. I’m sick of talking about it. Let’s talk about something else… No more Jay Z questions. I’ve answered them all,” he snarled. Chatty patty’s talked about this one for weeks.