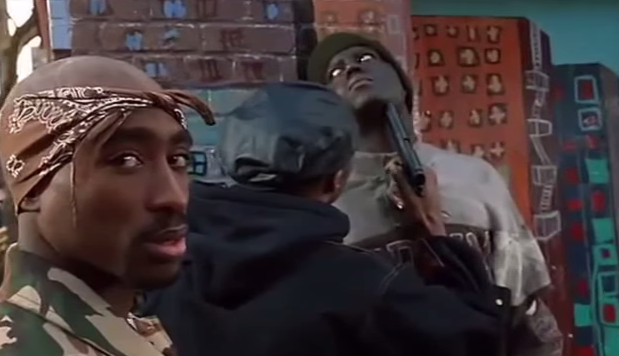 Similar as to how the 90s take the generational crown in terms of music, the same can be largely stated for its movies. Where as the 80s saw its iconic films mostly focus on the semantics of the culture and its rise to popularity, much of the 90s Hip Hop movies put the spotlight on many of the factors that affected the music.

Weighty topics such as gangbanging and drug dealing began to become prevalent in the music and it was indefinitely mirrored in the movies all the same. There also was an increase in budget and technology that helped with the presentation of other genres, such as comedies, which appear on the list as well.

Although the competition was stiff, we hand-selected these to be the best and most diverse the decade had to offer.

Kid N’ Play doublehandily proved how Hip Hop music could be cross promoted through film with the breakout success of Reginald Hudlin’s directorial debut. Following its release, an entire generation used the film as a how-to guide on how to make the best usage of a roof and four walls when the parents were away. Several sequels were also spawned but most fans drew the line at number two.

When the United States Library of Congress recognizes your film into the National Film Registry, it’s safe to say an impression was made. However, at the time, Singleton was simply showing the rest of the country the lopsided balance inner-city Los Angeles residents faced on the average day. BNTH brought forth many wins (showcasing Ice Cube, Cuba Gooding, Jr., Nia Long, Morris Chestnut and Angela Bassett in their first major film roles) and made Singleton the youngest to be nominated for a Best Director Academy Award.

Before rappers were making a living off of making songs about selling crack, drug dealers were doing just that in real time and infesting their own communities with the tragic aftermath. New Jack City went beyond the realm of a police crime drama and tackled the underbelly of a crime syndicate that would later go on to be immortalized in rap music to this very day (Cash Money Brothers, Nino Brown, The Carter, etc).

Tupac Shakur’s first major role as the menacing Bishop is still one best on-screen displays of acting from a rapper ever witnessed. The tale of four best friends from Harlem shifting from teenage antics to betrayals gave the world a clear depiction that even the most innocent kids could easily be swirled into the perils of street life. It also taught everyone to know the ledge.

Before Straight Outta Compton awed millions of viewers, CB4 made them laugh at the mere rising power of gangsta rap. Nelson George and Chris Rock co-wrote the Tamra Davis directed parody of early gangsta tropes with clever wit and understanding of the controversial rap sub-genre’s universal appeal. Eazy-E and Ice Cube’s cameos also showed their sense of humor (and thoughts on the film for that matter). It is also worth mentioning that Rusty Cundieff’s Fear of a Black Hat arrived on the scene nearly at the exact same time and matched the quality of humor, but the fakers from Locash are the ones who made the ultimate impact.

Tupac may have missed his chance after he was fired from the film (and subsequently charged for assault for fighting Allen Hughes), but that didn’t stop the film from being one of the most iconic representations of Los Angeles gang culture during the early 90s. Menace II Society also immortalized Larenz Tate’s O-Dog as the West Coast Hip Hop’s most popular homicidal maniac.

Another standout performance from Tupac, Above the Rim stands as a quintessential sports drama for the hood. It also sparked the question as to how many aspiring professional athletes got caught in the trap, never to see their potential be fully realized. Add the phenomenal rap soundtrack, which including Warren G and Nate Dogg’s classic single “Regulate” featuring Nate Dogg and the late Jeff Pollack film still holds up well today.

Ask a crowded room what their favorite scene from Friday and you’re likely to get a crowded room full of answers. Upon its release, the film immediately became the most known weed/hood comedy of the decade and birthed several quotables such as “You got knocked the fuck out!” “Clawd have mercy!” and “daaaamn!” Two sequels, a short-lived animated series and countless references in Hip Hop certified Cube and DJ Pooh’s baby as a bona fide classic.

Ten years prior to The Show’s release, Hip Hop music was still deemed as a novelty with no real expectations. Fast forward the clock, Russell Simmons and his Def Jam imprint, which would emerge as the front-running industry powerhouse, linked with the hottest rap stars at the time such as The Notorious B.I.G., Puff Daddy and Bad Boy Records, Dr. Dre, Snoop Doggy Dogg and Death Row Records, the Wu-Tang Clan and many more. Its accompanying soundtrack also reigns as one of the best rap compilations ever created.

Stylistically the most visually appealing film on the list, Hype Williams attempted to transition from acclaimed rap video director to filmmaker. All the while, having Nas, DMX and TLC’s T-Boz make up the ensemble cast, where none of them had any prior acting experience. The hood film-noir cinematography makes the film a very special cult classic.