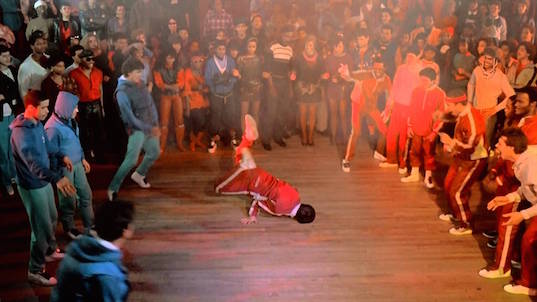 Straight Outta Compton’s greatness has been whittled down to a screenplay. The #OscarsSoWhite hashtag has spawned more dissecting articles than the toilet paper used to flush down the black nominations. Enjoying movies is a love enjoyed by all but when it comes to recognizing their merit, it’s still an unnatural selection process.

On that low note, we decided to give Hip Hop fans a blueprint to most-see cinema spawning from all decades. First up we’ll start with the 80s; which, much like the music, has laid to foundation for bigger budgets and critically acclaimed visuals.

Depending on who you ask, Wild Style could just very well be the best Hip Hop film of its era, if not ever. Its timestamp does tell, however, that it stands as the culture’s first impactful film. Additionally, it introduced Diamond Era icons such as Fab 5 Freddy, Grandmaster Flash and The Cold Crush Brothers to an entire new audience and the accompanying soundtrack has also become a beacon for rap purity. Just ask Nas, who used DJ Grand Wizard Theodore’s “Subway Theme” to propel his own classic album, Illmatic, a decade later.

Graffiti’s elemental pillar in Hip Hop’s foundation has been relinquished to an afterthought yet is still very present to the naked eye. The art is in the clothes we wear album covers we stream and buildings where the music is performed. Style Wars–a masterpiece derived from the vision of director Tony Silver and producer Henry Chalfant–dug deep into the early 80s NYC graf scene that included appearances from Crazy Legs and The Rock Steady Crew, late graf martyrs Kase2 and DONDI and even then Mayor Ed Koch.

There isn’t a film released during the era that perfectly weaved together every element of Hip Hop than Beat Street. Watching Grandmaster Melle Mel & The Furious Five, Doug E. Fresh, Afrika Bambaataa deliver performances on the silver screen during that time period was groundbreaking (and that’s putting it lightly). The New York Breakers and Rock Steady Crew were given shine alongside the highly regarded graffiti artists. Sure, the plot bit a chunk of its narrative structure from Style Wars, but Beat Street was the first story-driven feature film based on Hip Hop to get huge national and international exposure.

Breakin’ focused primarily on the more dance orientated leg of Hip Hop culture. What the film also did was artistically respect enough to make stars out of the leads including Boogaloo Shrimp and Shabadoo (a.k.a. Turbo and Ozone). The Joel Silberg-directed classic also goes down in the record books as the first major film looks for Ice T and Jean-Claude Van Damme. While break dancing is normally looked at as synonymously attached to rap music, a nice proportion of the soundtrack was R&B. Look no further than the dance number featuring Chaka Khan’s “Ain’t Nobody.”

If VH1’s The Breaks is the new prince of rap record industry docu-tainment, consider Krush Groove its great-great royal grandfather. Def Jam’s co-founder Russell Simmons had Blair Underwood portray his likeness as he served as film’s co-producer. With several artists all chipping in for small roles, it gave heads an early (and entertaining) look on how business was conducted before the final cassette and CD was theirs for the taking.

While there were flashes of elemental Hip Hop substance in the Motown soundtrack, The Last Dragon’s true rap bones are contained within the movie itself. As Bruce Leroy treks in search of the all-powerful “glow,” he encounters more breakdancing and pop-locking extras than most of the films featured in this list. Even the ruthless Sho’Nuff a.k.a. the self-proclaimed “Shogun of Harlem” walked with a swag propelled by tough talk and S-curl activator. R.I.P. Vanity a.k.a. Denise Matthews and Julius J. Carry III.

Race parallel comedies that would go on to become box office draws such as Bringing Down the House and Houseguest can thank The Fat Boys goofball feature for the inspiration. The light-hearted comedy did its part in presenting Hip Hop to mainstream audiences who otherwise were still fearful of its very idea.

Up onto this point, rap music and movies were transfixed on focusing from the street’s point of view and all the outliers from within. Hopper’s Colors literally flipped the script and highlighted two cops (one vet, one gumshoe) as the combated the warring Blue, Red and Brown set in late 80s Los Angeles. Ice-T’s powerful title track on the film’s soundtrack remains one of the most serene records ever penned on the topic.

Coinciding with Run-DMC’s fourth studio album of the same name, Tougher Than Leather proved two things. First, Rick Rubin is a masterful producer who couldn’t direct himself out of a closet. Two, such a flick was an early test for films and albums to run alongside each other. The modus operandi would be utilized several times throughout the years using House Party or even recently Pusha T’s King Push: Darkest Of Dawn.

Largely considered by many as the Brooklyn-born filmmaker’s crowning achievement, Do the Right Thing is also the moment Spike Lee thoroughly embraced Hip Hop culture. Making Public Enemy’s “Fight the Power” the film’s central theme was further proof of that. Like many films from Lee, it couldn’t have been more provocative at the time through its themes of racism and powerful ending relating to police brutality. Long live Radio Raheem.