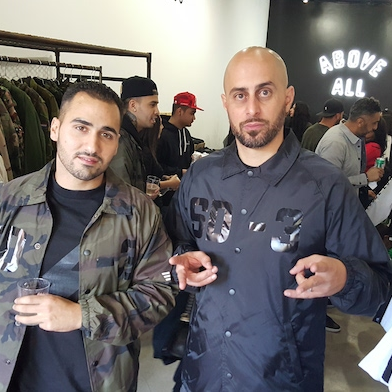 Walking down San Francisco’s Maiden Lane is like stepping through a time warp. Sitting sexy on the narrow alley’s west end, just outside of Union Square, are high-fashion havens Hermes and Dolce & Gabbana and on the east end, a vintage shop with dusty signage reading “Discount Camera.” A Mont Blanc store, a Tory Burch boutique, and a cocktail den called “Romper Room” that looks straight outta Mad Men fill the gaps between lofty office spaces—one part 1960s, one part $60 million.

Headquartered four stories above the juxtaposition is EMPIRE. Launched in the bowels of the Great Recession, the pioneering digital music company has released projects by everyone from Derek Pope to Diddy to TIP championing non-exclusive deals, an anomaly in the Industry Of Cool’s “Own Everything” savoir-faire. If the general public is unaware of this quiet giant, well, that’s by design. Fame is the last thing founder Ghazi Shami values.

“You couldn’t find me on social media for a long time,” Shami tells HipHopDX, sitting in a conference room inside of EMPIRE’s glistening new 2,700 square-foot HQ. “For a long time, all you saw was my logo, my lion logo. Everybody knows I’m super proud of being a Leo. I made a conscious decision a long time ago because I started off in the artists’ community… I felt I would get more satisfaction out of my life if I did something that helped a lot of people rather than use all those skills for myself.”

The son of an engineer, Shami grew up in San Francisco working in his father’s laundromat. By four years old he was climbing behind the washing machines making repairs; making his own pause-tapes with a Gemini mixer and two tape decks by the time he turned 14. He attended San Francisco State University where he majored in Radio & Television and worked for Sun Microsystems, Eloquent Technologies and Audio Highway, where he learned the intricacies of fiber optic cables and nascent compression technology during the new millennium’s initial tech boom.

“Somewhere around 2002,” he says, “I got the opportunity to quit my desk job and take a check. That little bit of money helped me get by and jumpstart my vision. I always valued autonomy because I felt like if I didn’t have autonomy then I wouldn’t have the time and space necessary to evolve my vision of the music industry. Size didn’t matter. What mattered was that I could make a living doing something I loved and didn’t have to answer to anybody. I started making a lot of beats. I was writing. I was working on my own album. I recorded a whole album with Messy Marv. I recorded a whole album with Planet Asia. Neither of which saw the light of day.”

Shami was also infatuated with technology and the possibilities of a digital future. Countless hours were spent in the legendary Hyde Street Studios—where Tupac Shakur, George Clinton, Del The Funky Homosapien crafted classic releases—mixing projects for artists at every level, printing cover art and pressing disks. He built a meager, one-stop-shop that provided nearly every service necessary for artists or brands to build mass awareness. He was always hands-on, always transparent. As his relationships and reputation grew, so did his understanding of what value he could bring to a culture of independence. The Bay Area never truly embraced the release-a-gaggle-of-free-projects-to-get-signed mindset. Artists sold out-the-trunk until they moved enough units to land in Tower Records or Amoeba or somewhere more lucrative. If Too $hort or E-40 or Spice-1 could earn $35,000 by moving 5,000 CDs independently, why would they be concerned with iTunes or other digital distribution opportunities, even if Silicon Valley is just 43 minutes down US-101?

“All this technology is here and the rest of the country is eating off of it and we’re not. Why is that?,” Ghazi asks, rhetorically. “Our independence is both our gift and our curse. It’s a gift because we can make a living. But sometimes we do a disservice to ourselves because we become complacent with the success that we’ve already achieved and we don’t take it to the next level.”

The tipping point occurred in 2006 when Ghazi landed a gig at INgrooves Music Group. He understood the do-it-yourself hustle and the rap industry landscape, Hip Hop culture and the Internet’s future impact on commerce. But what he lacked was an understanding of contracts. Most of the signed artists he’d worked with still asked for free studio time, even after selling enough product to chart on Billboard. Almost all of them had deals that they never recouped. At INgrooves, Ghazi not only learned digital distribution from an industry pioneer and help build its rap division while creating passive income for indie artists unaware of online revenue potential, but he was also able to shadow the company’s attorneys and become an expert in music business contracts.

“Eventually I started redlining the contracts on my own,” he explains. “Eventually I just started doing my own deals. I would disappear for three days and then come back. They’d be like ‘Where were you for three days?’ I’d drop off a box on the desk of like 50 CDs worth of catalog. I’d go buy the catalogs with my own money and get reimbursed whenever because I knew the objective was something great. I was building an infrastructure for people who were generally not-in-the-know to now be in-the-know. That put me in a position of power to be able to lead people into an area that was uncharted. Then eventually I went to the CEO and said ‘I want to resign my position.’”

EMPIRE’s business model is unique because it occupies a space between historical silos. At its core, it’s a digital distribution platform that curates talent similarly to a record label. But whereas indie labels like Strange Music or TDE have distribution deals with major companies like Universal, EMPIRE maintains direct deals with everyone across the supply chain. Ghazi and VP of Operations, Nima Etminan created the company’s accounting system, royalty platform and marketing strategy, client relations, legal. In a dense industry that often seems intentionally convoluted and flooded with middlemen, EMPIRE created its own ecosystem. It has no umbilical chord attached to any other entity.

“I think one thing that we did that surprised music attorneys for a while was that we came in and we started offering nonexclusive deals,” says Nima. “Traditionally in the music industry it’s always ‘Sign someone. Own him. Lock him in. Keep him for a certain amount of time.’ Ghazi always said ‘If you take someone into your home and tie them to the couch and say you have to sit here, he’s gonna wanna get up. But if you welcome him and say have a seat, stay as long as you want and do right by him, chances are he’s not going to want to leave.’ When people signed deals and started seeing checks; when they could login and see their royalty statement and see what they made and what we made and everything’s transparent. People start feeling comfortable and word spreads. Most of our big deals came from word of mouth.”

The Value Of Nonexclusive Contracts

Nonexclusive deals became a linchpin to the company’s success because Ghazi’s objective was always to “win more than you lose.” Even by taking a smaller cut than most majors would take, the business remains financially viable by staying leaner yet inking deals with higher number of acts.

“I’ve been around Ghazi since the 1990s,” says Planet Asia. “He’s been mixing my albums since then. I consider him family. He’s doing things that artists older than me should’ve been doing. At one time he told me that he had 400 artists or so under him.” Asia’s even launching his own company focused on producers, and he’s doing so benchmarking the EMPIRE model.

“All the rest of these labels could’ve done the same exact thing but they try to maximize,” he continues. “The major label system actually kills the possibility of an artist being big, the growth and development of an artist. A motherfucker might not want to make music no more after dealing with the politics. [Only taking] 20% or 30% is easy to do when you have 100 active people on your roster.”

“They’ve worked hard to really build up their capabilities, the speed in which they can move, and the integrity they maintain,” says Funk Volume CEO, Damien Ritter. FV released numerous projects through EMPIRE, including Hopsin’s Knock Madness, Dizzy Wright’s 1st Agreement, Jarren Benton’s My Grandma’s Basement, among others. “They pretty much work when we want. They have a revolving door policy.”

Perhaps Troy Ave’s Major Without a Deal is the most public example of EMPIRE’s agility. In June 2015, two days before Ave’s Summer Jam performance, he decided he wanted to release the album four days ahead of its original street date. EMPIRE was able to accommodate at the last minute. While the Internet reveled in Troy Ave’s perceived flop, few initially realized that the album actually released early. By week’s end, the album sold 7,800 units, more than commendable for an indie release.

“You can’t let losers tell you you’re not winning, because I made six figures in one week,” Troy Ave told HipHopDX. “Where I’m from, that’s a motherfucking W. That ain’t no L. You gotta know what’s real and what’s fake.”

“I’ll give you an even better example,” offers AmbrosiaForHeads EIC, Jake Paine. “One of my favorite artists is Diamond D. Last year, Diamond worked with EMPIRE on The Diam Piece. I personally think it’s his best album since Stunts, Blunts and Hip Hop. Previously, even with his ’90s work, Diamond wasn’t making many videos, or servicing the market like he has with this album. It’s available on MP3, streaming platforms, CD, and vinyl. It has videos for every song on the 19-track project. There were press releases, media runs, touring, and I’m sure plays at radio and video. While I’m sure Diamond had a strong hand in all of that, it wasn’t something I’d seen on his last few projects. EMPIRE made that possible.”

San Francisco 2.0, like so many cities nationwide, is in the midst of a boom cycle sporting a widening wealth gap exacerbated by a sharing economy. Former Labor Secretary Robert Reich describes the “Paris Of The West” as a “gated community… becoming uniformly wealthy, out of reach and out of touch.” Golden Gate emcee, Equipto confronted Mayor Ed Lee in a restaurant, called him a “disgrace to Asians” because of his economic policy, then posted the video to Twitter… and got props for it. America and Americans often feel more polarized than ever. So many egos. So many eyes clouded by dollar signs.

Ghazi’s EMPIRE sits in the middle of it all, adding layers to its ecosystem by offering transparency and education even at the expense of the bottom line. The company’s partnered with Atlantic Records, allowing it to offer additional services to artists with broader aspirations. They’ve even launched street wear boutique in San Francisco called Sol Disciples (Above All), fortifying their merchandising capabilities. EMPIRE can take an artist all the way while still offering all of the options.

“In an ocean of sharks, I’m gonna be a killer whale,” Ghazi concludes. “That’s very much how I view Empire: In a world of cars, we’re gonna be a Tesla. Yeah, we operate on the same freeway, visually it’s a car but the guts are a little different.”

Justin “The Company Man” Hunte is the Editor-in-Chief of HipHopDX. He hosted The Company Man Show on PNCRadio and has been featured on REVOLT, SiriusXM’s All Out Show, among others. He is currently based in Los Angeles, California. Follow him on Twitter @TheCompanyMan.