The Top Projects We Missed In 2015 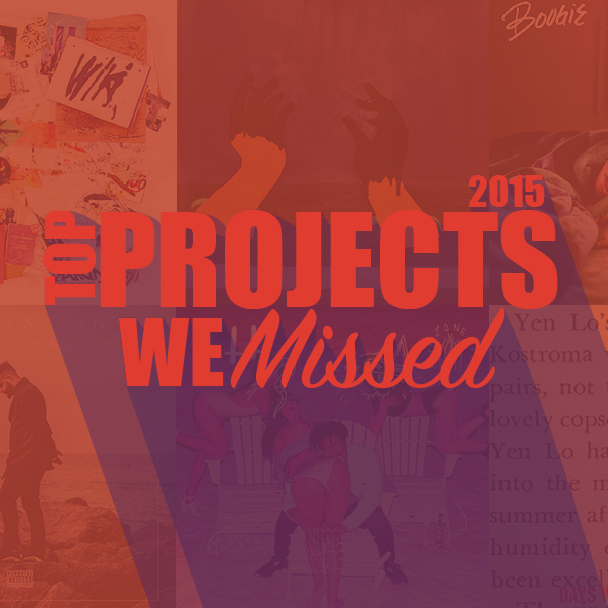 Compared to last year, 2015 could be considered one of the best moments within the decade output wise. Every sub-genre and commercial level of Hip Hop were fully represented. This is why major label releases from Kendrick Lamar, Drake or Vince Staples all sat well amongst the Oddisee’s and Talib Kweli’s of the world. Sure, several duds here and there reared their ugly heads, however, quality became the key to the year. So much that several hidden gems may have missed the DX review section. Here were some stellar releases we missed that could be a part of anyone’s year-end list.

Compton’s own Boogie emerged last year with the fairly well received Thirst 48 which featured fairly somber themes of self-absorbed social media narcissism. For his follow-up The Reach, he shook the West Coast with one of the year’s biggest bangers with the Jahlil Beats produced “Oh My.” However, his breakout single is the only turn-up moment on the record. Everything else features witty and poignant first-person accounts from his church ironically introducing him to gang life (“First Evergreen”) to one of the sweetest hood romance records of the year (“Found You”)

Ingleworld 3 wasn’t the only record DX’s 2015’s most Underrated Artist dropped this year. Skeme made the first Ingleworld sequel available for free over the summer. Hosted by Gangsta Grillz, Ingleworld 2 stands as his greatest work to date. For someone so connected to the West Coast’s current rap scene, the Inglewood-native managed to get some heavy features from both T.I. and Young Thug among others. Compared to Ingleworld 3, some could note that Skeme’s lyrical abilities were better showcased here.

King’s Raging Waters was more a triumph of quirky will than a full on change in persona. The talent was there and germinating, but a paring down of the wild froth of ideas he packs into his releases resulted in a svelte College Dropout like a reckoning. From bow to stern, the album resonated warmth and ideas you could tell were put through the ringer. It was also some of the most honest work of King’s career.

Call him Brownsville’s Marvel masterpiece, but Brooklyn emcee, producer and Natural Elements alumnus KA has once again come up with a malevolent night show of rage and deceit. As New York spirals down the drain of its own legacy, KA is immersed in his pastime with a love that borders on hate. Yen Lo, the fictional doctor of the Manchurian Candidate could represent anything that you want him to. The moral rot of a city that’s lost its soul or the cavernous underpinnings of capital. Perhaps, then, just a function for the steady layers of control crime and its misrepresentation has on us. And how those crimes are relative. Regardless, KA’s Days With Dr. Yen Lo got the help of Preservation to spin his tales. So, with not a drum kit in sight, KA relays the wonder of being an underground man in a den full of them, each sharing the same fever dream as they attack each other with reckless abandon.

Milo – So The Flies Don’t Come

Hellfyre Club, that scrappy alt-Californian collective seemed to have a decent 2015. Open Mike Eagle dropped his EP early in the year and then followed that up with hilarious verses on The Catcher Of The Fade. He followed that up with the Serengeti duo cut Time & Materials. Of course, Anderson dot Paak got all his well-deserved shine from being on Dre’s Compton, deftly following that up with an underappreciated if not chipped gem in The Anderson .Paak EP. Sneakily, Milo came in through the back door with an oddball dark comedy So The Flies Don’t Come. Raucous and alive, the weirdness is really intellectual openness, flitting from Marxist theory to just playing around with phonetics. All-in-all, it proved the Project Blowed legacy was still alive and well in a project that didn’t simply rely on jumping the shark to get its point across.

All the rap kids are really sad and no one knows why. But we can guess. Earl and Wiki mirror in each other in off-hand ways and the latter’s Lil Me was one of the most straightforward records of the year. Everything is unglamorous and morose, as he mostly spits drone like about his reality (record label moves and missing the old NY). There’s a veil separate from the money, cash, hoes stuff of the 90s that is bothering the youngsters. Again, like most things in rap, it comes down to authenticity. Do you want to hang out with the real n*ggas  or the fakes? In truth, it doesn’t really matter but the mind makes it so.

Thundercat – The Beyond / Where The Giants Roam

Easily Thundercat’s best, most resounding, most cohesive record, it’s a shame that somehow it slipped under our collective radars. It’s soft where it should be and where it shouldn’t, and it’s so layered and so carefully constructed that it feels like a fever dream lived largely. A surprise, the album came on the heels of his work with K. Dot on TPAB. And, in truth, Thundercat has been involved in the process of creating a litany of great albums this year including The Internet’s Ego Death amongst others, but his own EP took us down a road of airy brilliance with replay value du-jour.

Sa-Roc – The Legend of Black Moses

Since around 2014, Atlanta’s own Sa-Roc built an impressive catalogue that’s essentially made her one of the rising conscious rappers from the south. This year, she doubled up on the releases by dropping The Legend Of Black Moses mixtape earlier this year before following up later in the year with Gift Of The Magi. Hearing her take on more popular Hip Hop and R&B instrumentals really displayed her real potential if given a bigger sonic toolset.

The amount of momentum Gangsta Boo gained last year between her collaborative project with  Houston emcee/producer BeatKing, joint album with fellow Hypnotize Mind associate La Chat and standout verse on Run The Jewels 2 raunchy “Love Again(Akinyele Back)” insured the Memphis queen well endure past her time with Three 6 Mafia. This year, she dropped Candy, Diamonds & Pills which could be one of the most trunk rattling experiences one will enjoy this year.

Some could have dismissed Father as a novelty act after “Look At Wrist” featuring Key! and ilovemakonnen. Proving his worth as one of the most notable emcees/producers taking over Atlanta’s alternative Hip Hop scene. He returned with more raunch and dread with the appropriately titled Who’s Gonna Get F*cked First? Always self-aware, tracks including “Everybody In The Club Getting Shot” and “BET Uncut” is jovial nonsense that always manages to become fascinating at every turn.