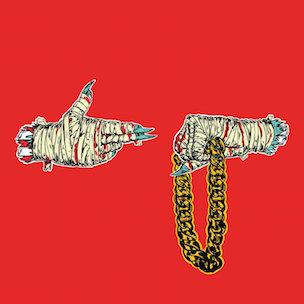 Run The Jewels may have began as some spontaneous idea between two talented, veteran musicians, but the unlikely pairing of Killer Mike and El-P quickly blossomed into more than the sum of its parts. In 2014, the Drake’s, Pusha T’s, and J.Cole’s unsurprisingly blessed fans with replay-value gems, but Run The Jewels’ debut effort rapidly rose to the ranks of Album of The Year qualifications across the board. The secret is out now—Killer Mike and El-P have carved out a shrewd niche of their own, and defying the laws of musical gravity, the stakes are raised even further with their latest project.

The egotistic pairing of KIller Mike and El-P are welcoming the challenge, undergoing the seemingly impossible task of raising their blitzkrieg social onslaught to new heights. “Jeopardy” commences with a vigorous Killer Mike flow, as he expertly navigates through El-P’s intermittent synth stabs, samples, and fluctuating drum patterns, again witnessed on “All Due Respect” featuring Travis Barker. Like Madlib, an El-P instrumental is much more than a product of repetitive loops and drowning 808 kicks, making the task of rhyming over them exceedingly difficult for most emcees. But Run The Jewels’ inherent chemistry makes the whole process seem flawless, as is the case with the engaging, vacillating flows of Killer Mike on “Jeopardy.” “Blockbuster Night Part 1” commences with a gritty, heavy metal aura as Killer Mike exponentially showcases his high-octane pugnacity with myriad quotes: “Last album voodoo, proved that we was fucking brutal / I’m talking crazy, half past the clock is cuckoo / You rappers doo-doo, baby shit, just basic doo-doo.” The pair employ the Meth-and-Red strategy, passing their mic patons back and forth to solidify one of the most standout tracks from the album.

With a plethora of critically acclaimed solo albums to his credit, it’s almost an afterthought when Killer Mike gets busy so to speak, but El-P has received criticism in the past for not strictly employing his talents behind the boards. Throughout RTJ2 he holds his own rhyming alongside a superior wordsmith. On “Oh My Darling Don’t Cry,” ever the aggressor, El-P rifles off dynamic bars with a permanent supply of stamina: “Fuck the world, don’t ask me for shit / That’s word to Big / I dreamt we owned the world but I woke up and it don’t exist.” On that note, Killer Mike is simply dazzling on “Close Your Eyes (And Count To Fuck)” but El-P proves a worthy counterpart, offering: “I wear my Yankee so tilted I actually walk with a hunch / Look at Mikey, I think he likey, we are sinister sons.”

As he transitioned from Dungeon Family protege to an artistically menacing artist in his own right, Killer Mike has blossomed into the neo-Ice Cube of our times, an emcee with no qualms about targeting the injustices of the world in strikingly uncensored fashion. This angry-black man, lethal-injection happy sentiment meshes well with the conspiracy theorist minded, perennially pessimistic mentality of El-P. Further buttressing their vexed probing is El-P’s high-wattage instrumentals. The entire package is evidenced on “Lie Cheat Steal,” in which both parties mix comedic illustrations with poignant social commentary, bypassing the holier-than-thou dogmatic treatise route. But arguably most impressive is the instances where the duo cool their righteous political penetration in favor of good ol’ fashioned shit-talk. With “All My Life,” El-P interpolates a screwed sample, smooth backdrop vocals, and one his best lyrical performances to date: “Step armed heavy and he brought Mike / Never step light, no fair fights.” However, it’s Killer Mike’s performance on “Early” that most solidifies his status as provocateur as he ejects a narrative-rich, scathing attack on police corruption in the U.S.

Although the duo’s mass appeal is not beholden to one particular weapon of choice, on “Crown,” both Killer Mike and El-P give credence to why they are such a dynamic creative force. Instead of relying on contrived plotlines, both emcees manifest graphic tales to take listeners on a journey via their personal obstacles. The duo arguably save the best for last with “Angel Duster,” where Run The Jewels verbally relay the artistic impetus that drives their dynamism. It’s a rare feat indeed when artists can skirt the lines between keen musings and dome-nodding instrumentals. As the chorus on “Angel Duster” implies, RTJ is here for the masses, despite the fact the duo will most likely never see the lights of Top 40 radio. Regardless of the terrible decisions of disc jockeys worldwide, one can comfortably expect the group to continue to probe societal issues most rappers shy away from all the while abstaining from the mundane sonic approaches of their contemporaries—but most importantly, make scintillating music in the process.