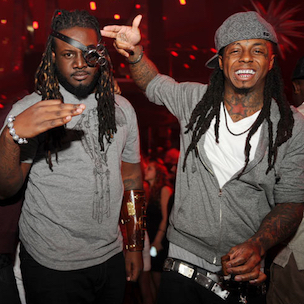 Lil Wayne is great for a lot of things. Crazy freestyles, obscure punchlines, an arsenal of different flows, knockout features, fairly consistent bodies of work – the list goes on and on. His residence in the league of extraordinary rappers and potential GOAT status is known by pretty well every self-aware Hip Hop fan. But just like any good rapper, he’s got a handful of shortcomings. One of Weezy’s would undoubtedly be his tendency to break a promise.

These promises come in the form of vowed albums that end up never seeing the light of day. Since Lil Wayne could even rock a Cash Money chain, he has been promising fans and artists alike a slew of albums/projects that are either done and unreleased or not even started. This shouldn’t come as a surprise to fans despite his already lengthy catalogue. Most of these projects are mentioned once, never to be heard of again. We should all know by now that anything Wayne announces should be taken with a grain of salt, but it’s hard to not get your hopes up; especially if you’re expecting something of Carter 3 standards.

These broken promises include his love song album, his rock album follow up, and even the final instalment to Tha Carter series – but those aren’t what hurt the most. The most intense disappointments are his promised collaboration albums.

Throughout his career, Wayne has promised some very high profile collaboration albums with some of Hip Hop’s biggest hit makers. It is no secret that Wayne is a master networker and his list of collaborators is longer than most. This works both as a gift and a curse. On the one hand, we get a smash hit with Wayne and another Hip Hop high roller. But in making said hit so well, Wayne then promises that an entire collaboration project is on the way – and in a matter of months, it is never mentioned again. Talk about a letdown.

Recently, 2 Chainz announced that he and Wayne would be releasing a collaboration album called Collegrove.  The release date? “Sooner than you think.” Coming from 2 Chainz, this might actually be true but odds are this fantasy album will never hit the shelves. So in mourning of this album that will almost certainly never be released, we decided to look at five collaboration albums Wayne has promised us over the years that will probably never come out.

He Rap, He Sing with T-Pain

Perhaps one of the more memorable collaboration album promises, Lil Wayne’s obvious chemistry with fellow dread head T-Pain was entitled He Rap, He Sing. The two even went as far as giving themselves a duo name; T-Wayne. These two had been making music in a collaborative capacity since 2006 and only strengthened their chemistry as the years went on. After hits like ‘Can’t Believe It’ and ‘Got Money’, amongst other collabs which featured a T-Pain hook and Wayne verse, it was a no-brainer for these two to ultimately join forces. The idea of this rumored T-Wayne album became increasingly real when the two went on tour together in early 2009. Seeing them perform together side by side plus hearing their handful of He Rap, He Sing demo tracks naturally triggered the “maybe this could actually happen” emotion but as time went on and no new music surfaced, it was obvious that He Rap, He Sing had been inevitably vaulted.

I Can’t Feel My Face with Juelz Santana

Before The Weeknd turned this phrase into an incredibly catchy hook, it was the name of what would have been Wayne and Juelz Santana’s masterpiece collaboration album/mixtape. This project actually brought forth some really impressive music. Initially conceived way back in 2007, the two rhyme slingers dropped a ton of music in the lead up to what would arguably be one of the best collaboration projects in rap history. Well, if you look at their entire catalogue together (songs, reference tracks and even full-length mixtapes) you can see the obvious potential these two had. Guaranteed, a fully polished piece of work would have done numbers like Jordan in the playoffs. The alleged reason a full album didn’t hit shelves was because of “issues” between their respective record labels. In other words, both rappers were too caught up in one-upping each other on verses to have time to sort out any of the necessary paperwork. Despite the full album never gracing our ears, we, at least, got some really impressive music that stills stands as some of the duo’s best work to date.

Before we dive too deep, it’s fairly obvious that this project will never come out. If any of these collaboration projects we’ve listed are to ever drop, it’s pretty well a 100% guarantee that it won’t be this one. Wayne and Birdman’s recent falling out basically destroys any hope of them making music together again; let alone an entire collaboration album. This is incredibly unfortunate seeing as the first instalment gave us songs like “Leather So Soft,” “Stuntin’ Like My Daddy” and “You Ain’t Know” – all of which are certified classics. Talks of LFLS 2 started boiling essentially right after the first one dropped. The success of the first one obviously fueled the announcement of the sequel but to no one’s surprise, the actuality of that album happening slowly faded until a string of Lil Wayne tweets indirectly confirmed that it will never come out.

This one is less of a Wayne promise and more of a Drake promise, however, both have alluded to the joint album. After the release of Jay-Z and Kanye West’s Watch the Throne, both Drake and Wayne claimed that they were originally planning to release a collaboration project and that Jay and Ye actually copied the idea from them. As debatable as that may be, Drake and Wayne do in fact have an incredible amount of collaborative material that would merit classic status. Out of all the collab projects Wayne has promised, this one would be the strongest. Songs like “Ransom,” “Miss Me,” “HYFR” and “Believe Me” are all testaments to how solid an entire album of the Young Money rappers would be. Whether they are going back and forth or Drake is just providing Weezy with some quotable chorus, their songs almost always perfect. Although this project was always just a rumor with neither Wayne or Drake truly confirming anything, there was a shimmer of hope when the two embarked on the Drake vs. Lil Wayne Tour back in summer 2014. But as history so undesirably tells us, no such album has managed to surface.

The latest collaborative promise from Wayne is with long-time collaborator 2 Chainz. The two have supposedly been close since before “Duffle Bag Boy” but since that 2007 smash hit, their work as become more and more interwoven. Not much is known about this potential album seeing as Chainz literally just announced it last week, but it seems, again, too good to be truuu. If I were to guess how the idea for this project came to be, I would assume both were in the studio together putting the finishing touches on a song for Tit’s solo project when Wayne suggested the idea of an entire project together. I could be completely wrong but we haven’t seen any major collab between the two as of late and Wayne has been fairly low-key with music this latter half of 2015. Sure, the idea of combining the College Park and Hollygrove styles together on a full LP is exciting but the odds of this ever making it to our ears are slim to none.