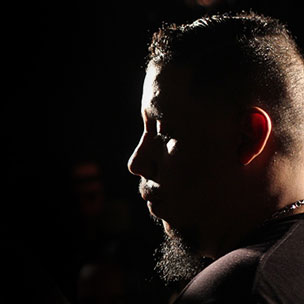 Earlier this month New York City lost a fixture in its Hip Hop scene. Robert “PH” Diaz, known to many also as Pumpkinhead, was a veteran of the underground, a pioneering face of a thriving battle rap community, a meticulous lyricist with over two decades in the game. He was also a father, a husband. I considered him a friend. I played his Orange Moon Over Brooklyn album before I ever knew Pumpkinhead personally, because before a friend I was a fan. When I moved to New York City years ago to pursue dreams of music journalism and to explore the roots of the art form I fell in love with, PH was one of the first people to welcome me into the community with open arms, to be a familiar face in a sea full of strangers, and offer me a glimpse into the beauty, unity, passion, and creativity that undulated through the crowds, mic cords, speakers, cyphers, and studio sessions of New York’s oft-overlooked independent rap realm. PH and his closest friends, with the kindness to others and dedication they exhibited, were my inspiration behind spending years of my life bringing as much attention as I possibly could to a breed of music that FM radio and mainstream media seemed to put on the back burner.

Interestingly, as it tends to occur when people pass away, many media outlets have reported on PH’s death. A quick peek at PH’s history in the rap scene, his discography, and his role in the growth of battle rap would easily explain why Time magazine, Billboard, and Rolling Stone, just to name a few, would publish articles acknowledging his life. Of course, as is the case with many underground artists, articles acknowledging PH’s work on such large-scale media outlets were scarce while he was still alive. In the hours following his death, I found myself on the rooftop of a building where one of his closest friends lives on the outskirts of the Park Slope neighborhood of Brooklyn, where PH spent years of his life. Surrounded by PH’s childhood friends and family, much was said about this surge in press, and although the viewpoint on this phenomenon could have been spiteful, everyone seemed thankful he was getting the acknowledgement we knew he deserved, and we simply wished he could have been around to see it himself. We poured drinks and mourned collectively as the sun set and, because the universe always has a peculiar way with timing, an orange moon rose over Brooklyn.
Rather than approach this piece as another journalist writing a story about PH’s musical achievements and the family he leaves behind, I write this as a friend not only of PH, but a friend to those in the Hip Hop community of New York City who called him family. Through the course of a couple of weeks, through personal conversations and attending tribute events held for PH, I listened to the people who knew him the most share memories about PH. Many of these quotes were acquired at the legendary, ongoing EOW event at the Pyramid in New York’s Lower East Side, on a night when PH was scheduled to perform. Everyone involved decided to let the show go on, but all proceeds from the night went to PH’s family, those who worked with him most took time to share words with everyone in attendance, and the community came together to mourn a friend. The crowed overflowed from the venue onto the rainy street, a who’s who of underground Hip Hop, ranging from his Team Homi, MCMI, and Brooklyn Academy family such as Sara Kana, Amzilla, Blitzkrieg, and more, to people like DJ Neil Armstrong, Jarobi of A Tribe Called Quest, and Immortal Technique. For as many tears as were shed that night, smiles, hugs, and laughs were in greater abundance, because that’s what PH was about—always showing love. The following are quotes, either acquired during conversation or as part of a stage tribute to PH, from some of the people who knew him best. If you ever wanted to know who Pumpkinhead really was, these are the people who can tell you.

“I wanna say thank you, because he got me started in this battle rap shit…it was PH that came up to me like, ‘Ima be booking battles for this Grindtime shit, what up? You should do a battle!’. And I remember him in Southpaw one day, from the time I walked in to the time I left, drunk, high, all that, he was still asking me to battle. So I told him to set it up, and it was against a kid named Chuck Black. I went in mostly freestyling, thinking it was some bullshit, never knowing what Grindtime or battle rap would become. Poison Pen was there, Sara Kana, the regular faces…I stay with the same circle, y’all. I been with the same niggas. I love y’all, but I fuck with my peoples, B! And PH was one of my peoples, B. This shit is crazy, because six months ago we lost our other brother, J. Arch. And they shared the same birthday…Team Homi day is September 17th. That day was also the first day a pay-per-view battle ever happened. PH put a lot of people on who people love today, he gave them niggas their first shot. I could name names all day. From the bottom of my heart, thank you bro, I love you forever for that shit.” — Swave Sevah

“PH to me is a legend and a fixture in the underground NYC Hip Hop scene. When I first met him it was at the End of the Weak show, at the Pyramid. He embraced me immediately because of my poetic improvisational skills, I was a good freestyler. We’re both Puerto Rican so we clicked on that…He commanded respect from me for him being who he was. I can relate to where he was coming from. Everybody is giving him mad props now, of course he deserves that, but he deserved that when he was living, too, which kind of perplexes me. He was always a great person. It breaks my heart to know he has a daughter on the way and he’s not going to see her. He’s a legend, a great brother. All of this is surreal.” — CF, aka Constant Flow

“I’m talking to Tonedeff and we’re going over why is it that, CNN, BET, Rolling Stone, fucking Perez Hilton, News 11, Billboard, Time Magazine, Entertainment Weekly, the New York Times all decided to cover him when he’s gone. And we got mad at that! You know why they covered him when he was gone? Because he fucking deserved it! Because when a legend dies that’s what supposed to happen. They remembered my muthafucking brother. They’re supposed to talk about a legend when he leaves. And the sky wrote that shit, and when we looked up, and we stopped talking, there was an orange moon over fucking Brooklyn.” — Mr. Mecc

“He calls me and says, ’I’m going to Canada tomorrow, you want to go with me?’. I’m like yo, you gonna call me and ask me to go to another country with you in 13 fucking hours? But for some reason I said, ‘yeah, let’s go nigga!’. So we went to Toronto. I used to always clown PH because he was like ‘yo, I live in Manville,’ I’m like ‘pause your life, nigga.’ So, we drove to Manville, New Jersey to get him, boom, and we went all the way to Toronto. He did his last battle, for King of the Dot, and it was amazing because we spent the whole weekend together chopping it up. I’ve known PH more than half my life, that’s my big bro from day one. It was just weird because I’m honestly confused. He was so full of life, full of vigor, no problems, nothing. I was in the room chilling, and son was there, Ammo was there, he played old verses from 90-whatever-the-fuck and we were just having a great time. PH kept going back to his son, Shawntay [his wife], all about his family. We spent that last weekend together, not even two weeks ago, and I guess it was like the going home tour, you feel me. On some G shit, he’s the reason a lot of y’all even know me. I put in a lot of work, but PH is the one who introduced me to the scene. I stepped in and did what I did, but everything I did was a reflection of my G.” — Poison Pen

“I remember Pumpkinhead when the underground from New York City was tiny and dilapidated and a shell of what it is now. He did a lot to try and help other people out who didn’t have anything to do with it. He definitely was a nigga I argued with about a lot of stupid, irrelevant things, because he liked to always be right about shit. So I used to just go back and forth with him, and now I have fond memories about arguing about nothing. He was a really generous person, a kind person, and he was the type of dude that didn’t fuck with people unless they fucked with him. He wasn’t a bully. He was a big dude, he had hands like meat hooks, but he wasn’t an asshole unless people fucked with him. He was a good, honest, classy person and I miss him and wish he was here now. He did so much for people. I’ve known him for 20 years, met him in 1996 when I was still in high school. People introduced me to him and I was like ‘oh my god!’ because he was famous in the underground. He showed me a lot of love when I was battling. He said, ‘man, it’s great to have another latino emcee out here killing it.’ He was always very encouraging. I have no choice but to remember him well, and though there’s nothing I can do for him personally now, I can do the best that I potentially can to take care of his family. I wish him well on his journey wherever he’s going. I want him to know, if there’s anything I could say to him, that me and the rest of the fam are gonna do the best we can to take care of his family. We love you PH.” — Immortal Technique

“PH knew everybody, and everybody knew PH. We all have the same story to tell about him. But not one person on earth knew PH better than the man himself. And he made sure that through countless songs and rhymes you could hear his story first hand. If anyone who reads this, or any article about PH, is truly interested in knowing about him? Find out the way he intended you to — let his music speak. It’s 2015, and there’s 20 years of music out that is not hard to find at all. You’ll get a far more accurate picture than anyone else could ever paint.” — Pack FM

In memory of Robert Alan “PH” Diaz, September 17th, 1975 – June 9th, 2015. He is survived by his wife, Shawntay, his two sons, and the couple is expecting a daughter.  Funds for PH’s family are being collected via www.youcaring.com/shawntay-ocasio-366664