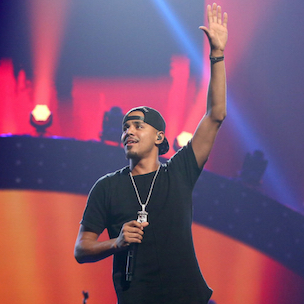 The time has come to talk about something from J. Cole’s 2014 Forest Hills Drive. There are only one or two youngish artists that are simultaneously more lauded and vilified than young J. Cole within the Hip Hop realm. Drake, maybe, but his lane is all wrapped up in a christmas bow and (say what you will) but he did it of his own prodigious talent. Big K.R.I.T., perhaps, but Cadillactica may have ushered him out of the “maybe” category and into the “definitely” one. As for Kendrick Lamar, we are simply waiting to see if he can deliver on another body of work as vibrant and powerful as GKMC.

But J. Cole is different. As we previously discussed in our “Stray Shots” column, we have expectations for Cole that we think are justified and important. And while an artist is more than free to do what he or she wishes, as he or she wishes, there are opinions of which we hold dear that filter in after a few bodies of work. Did J. Cole, then, make a transcendent album? We’ll let you decide. What’s important now is that young Simba has taken shots at what he seems to see as a whitewashing of the genre on 2014 Forest Hill Drive’s number six offering “Fire Squad.” Aptly titled. And, of course, after a good listen to that song we had to weigh in. This time, you’ll find our Editor-in-Chief Justin Hunte, freelance writer Ural Garrett, and myself, Features Editor Andre Grant taking a crack at the controversial track.

Ural: “We all kings, kings of ourselves first and foremost.” See what Jermaine did? This spoken outro comes after the Fayetteville native calls himself the “new Ice Cube, meets the new Ice-T meets 2 Live Crew, meets the new Spike Lee, meets 02 Wayne” or excellence of black art at all levels. Yes, there was a time where Amerikkka’s Most Wanted lived in perfect harmony with Nasty As I Wanna Be.  Not because one was better than the other, but because both represented unique perspectives on black life through Hip-Hop. That’s something that J Cole’s magna cum laude self understands fully on “Fire Squad.”

Kendrick Lamar obviously sent a shockwave last year with “Control.” Once the dust settled however, Macklemore swept the Grammy’s and Forbes is calling Iggy Azealia the Queen of Hip-Hop; all in a year’s span. Even R&B wasn’t safe if Justin Timberlake and Robin Thicke had anything to do with it. Maybe the problem was that everyone from purest and casual listeners to media caused so much cultural separation, things became easier for those with privilege as Cole rhymes on Vinylz production. For someone who counts hyper-capitalist Jay Z as a mentor, Cole feels a lot more philosophically adept to articulate the issue. And all this two weeks after Ferguson’s failure to indict Darren Wilson and on the day New York police murdered a man on camera for the world to see without repercussion.

Andre: Early on in “Fire Squad,” produced by Washington Heights native Vinylz, we find J. Cole waxing poetic about being the man and making half jokes like, “You might be like the new Ice Cube / Meets the new Ice T / Meets 2 Live Crew / Meets the new Spike Lee / Meets Bruce like Wayne / Meets Bruce like Lee / Meets ‘02 Lil Wayne in a new white tee / Meets KD, ain’t no nigga that can shoot like me.” But it’s his fourth verse that proves he may not just be putting words together to make you go “ahh!” That verse finds him going at the multi-pronged head of what some have seen as a co-opting of Hip Hop music and culture by white artists. Here’s what he said: “History repeats itself and that’s just how it goes / Same reason these rappers always bite each other’s flows / Same thing that my nigga Elvis did with Rock-n-Roll / Justin Timberlake, Eminem, and then Macklemore / While silly niggas wonder who gon’ snatch the crown / Look around, my nigga, white people have snatched the sound / This year I’ll probably go to the awards dappered down / Watch Iggy win a Grammy as I try to crack a smile / I’m just playin’, but all good jokes contain true shit / The same rope you climb up on, they hang you with.”

Strangely, this is when J. Cole is at his best. Pointing out inequities in culture is one of his greatest talents. There’s no doubt that Hip Hop has always been an outsider culture. At one point it was even counter culture, but as the two circles of Hip Hop and Pop Culture begin to get closer together, you find that the overlap creates situations where the wider culture no longer has to necessarily seek black faces to identify with. It means they don’t have to cross that socio-cultural-ideological divide — the entry point to Hip Hop, originally, to begin with — to gain entry to the kingdom. It is no wonder then, that in 2013 there were no black artists with a number one single. And it is no wonder, then, that in 2014 there were no black artists to go platinum. So is J. Cole correct? It’s hard to say. Interestingly enough he mentioned Elvis, which may be the most salient pick. With the veil of time lifted we can see what happened there clear as day: Elvis made Chuck Berry obsolete to white, majority audiences. Is the same thing happening in Hip Hop? At least Cole raises the question. Like “Control” before it, which used the spectre of competition to spur other artists to speak on an uncomfortable truth (perhaps not a fact, but a kind of truth), maybe “Fire Squad” will do the same. After the Eric Garner non-indictment, and the outrage pouring on to social media from the Hip Hop community, there’s no doubt we have much to discuss.

Justin: Let’s play a game. The game is called Which Emcees From The 2000s Would Have Been Revered In The Golden Era 1990s?

Now let’s say that for an artist to be considered he or she must have released their first widely known project post-2004, which exclude acts like Kanye West and Pusha-T, for example (looking back 10 years is just cleaner).

I’ll go first. Part of what made the Golden Era so much fun was that lyrical skill was paramount and mimicking anyone else was strictly prohibited. Everything from the metaphors to the wardrobes oozed freshness. Because of that, it’s difficult to see Action reach mass appeal then because he sounds too much like Ghostface Killah too often. That’s not saying that he’s not dope. That’s saying that “dope” was different in the 90s. It’s easier to see Lupe Fiasco reach reverence, on the other hand, because there are few things Lu can’t do lyrically or stylistically. The first verse on “Daydreamin’” alone—where he imagines a project building turning into a robot with such detail it might as well be in IMAX—stands strong next to some of the 1990s most celebrated stanzas.

Cole is in an interesting space right now. On one hand, Cole is arguably the Hip Hop People’s Champ. They got his back like the Verizon man, and all that. At the same time, since he’s yet to craft a universally acclaimed body of work a cloud of underachievement seems to hover over his career. His albums feel boring. So it’s interesting to hear him open “Fire Squad” with “Ain’t no way around it no more, I am the greatest / A lot of niggas sat on the throne / I am the latest / I am the bravest / Go toe-to-toe with the giants.” Cole unloads throughout, kicking a controlled aggression more matured than we’ve yet heard from him, targeting biting emcees and the White Rapper Takeover seamlessly and simultaneously. And just when you think the track is little more than a typical ball-tickling cypher rhyme, the perspective flips 180 degrees once the spoken word verse kicks in closing out the song. “Fire Squad” is cocky and clever, boasting the newest dimension to his songwriting. It’s dope enough that if someone came up to me and said that J. Cole would absolutely be revered if he had came out during the Golden Era, I would immediately disagree… but I’d understand.