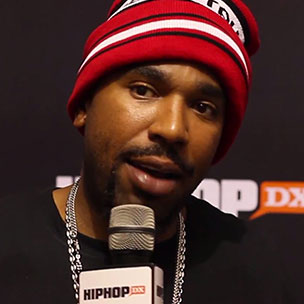 N.O.R.E. has had a long and illustrious Hip Hop career. From classic album’s like Capone -N- Noreaga’s The War Report, to his solo classic N.O.R.E., he’s seen it all — if not most of it. One aspect of that is working with some of the most beloved Hip Hop artists of his generation, and amassing a treasure trove of stories with classic emcees as well as hard earned lessons about the music business.

At the recently held Sunset Strip Music Festival in Los Angeles, we had the chance to pick N.O.R.E.’s brain on a number of topics and what resulted was mini-lifetime of classic stories about things like kicking DMX’s dog and getting a call from Big Boi performing at the Tunnel. Not to mention, a few tips and tricks to gaining longevity in a game fraught with pipe dreams at every turn and the explanation behind his classic line at the top of “Superthug.”

N.O.R.E. Reveals The Impact of The “War Report”

“Well, when we did The War Report it was basically based on what we saw at the moment. We only saw Lefrak and Queensbridge. If you listen to The War Report, there’s nothing about anywhere else in the world. We really didn’t have a vision outside of Lefrak, Queensbridge, Queens. We just, that was it. so we made music. I’m retarded to this day when I perform in Poland, and Dusseldorf, and Hamburg,  and Frankfurt, and all these places where they’re like, yo, The War Report.” So after making that project, we were so in a shell. That’s why N.O.R.E. is actually my favorite album because that was the first time I wanted to explore and mess with different sounds and mess with different type of peoples. That’s how you get to meet people like Pharrell and Swizz Beatz, because I wanted to explore.”

Why N.O.R.E. Chooses “Illmatic” Over “Ready To Die” & Biggie

“I would never choose between one, but if you put a gun to my nuts and told me I had to choose between one… Obviously I’m from Queens, I would have to pick Illmatic. Now, I’ll give you a classic story, I was in jail when both of those albums came out. Prior to both of those albums coming out, the whole Brooklyn in jail was behind Buckshot Shorty, Smif & Wessun, and I liked them too, they always been my people. When I heard “Party And Bullshit,” I was like this dude right here is gonna be that dude! So when Ready To Die came out, I’m the dude that put on Brooklyn dudes. I was like, I told you this is the dude. So I’m the dude where I was at who put Brooklyn people onto Biggie. I know that doesn’t mean shit to nobody, but it’s real Hip Hop stories.”

“There’s a lady who just did it recently. I don’t know if you guys know her, she swims from one part of the English Channel to the other part of the English Channel with sharks, and guess how much she gets… Anybody? She gets zero dollars. So, back then when I wrote the lyric, I was in Europe for some dumb shit. There was a guy who swam the whole English Channel and I watched the whole shit and it was mesmerizing to me. Then I was like, “yo what does he get at the end?” And they were like, “nothin’.” In my mind, when I wrote that lyric… “I light a candle…” In my hood you would light a white candle, that’s when somebody passes away. I’m trying to say “light a candle” because somebody passed away and I was so mad I could “run laps around the English Channel, at Neptunes I got a Cocker Spaniel.” Back then we were calling guns different types of dogs. K9 was a 9mm, a Cocker Spaniel was a .22, a pit-bull was .45, but I admire people who ran and swim laps around the English Channel. I could never actually be them, but I actually have to admire that. That’s awesome, but I can’t do it.”

What N.O.R.E. Did With His First Advance & What The Tunnel Was Like

“My first advance for The War Report was $5,000. I bought an Avirex coat and a cowboy hat and I went to the Tunnel. That was the shit back then. If you didn’t go to the Tunnel, you was like a sucker in New York. The Tunnel was like Rikers Island of clubs. I don’t know if you know what Rikers Island is, but it’s a jail. The Tunnel was like that. You used to walk through the Tunnel and your balls just get searched. They used to make sure you take off your sneakers, make sure you didn’t have no razor in your sneakers. They used to make you open up your mouth. Same shit if you go to Rikers Island. That’s how raw Hip Hop’s scene was back then. I remember Big Boi from OutKast calling me like, “yo, I gotta do the Tunnel. You comin out with me.” I’m like, you sold 10 million motherfucker you don’t need me. He’s like, “nah, this New York crowd is tough.” I’m like, “Big Boi, I’m comin with you.” What I’m saying, Big Boi he killed it, but what I’m trying to say is that’s how the era was back then. And that’s why New York is so behind in Hip Hop now, because we ran it for so long that we deserve to be behind right now. I’m from New York, born and raised, but we deserve to be back a little bit. We’ll come back. When we appreciate it, we’ll come back. I remember those days and it was a rough time, it was beautiful. Big up to Outkast, and big up to Bun-B and UGK and Pimp C for remembering and hitting people [up]. Like right now, you come to New York, you just come to New York. You don’t call nobody. Back then, you used to have to call and check in and say “what’s up bro, where you at?”

N.O.R.E. On Being Independent & Putting On The Next Generation

“I think it’s more of the more money you want, the less control you’ll have. So everytime you hear an artist say he has a $3,000,000 deal, that’s $3,000,000 worth of control he does not have. So the more and more you stay in this business, the more and more you want to control your own destination, your own journey. Everytime you hear an artist that gets signed for $2,000,000 or $3,000,000 that’s that much money of non-control you have, non-creativity you have. So what I do is, I like to work with people who I’ve worked with before, who are not crooks. I don’t mind working with cheap people, I just don’t want to work with crooks. There’s a lot of crooks out here. As long as you have that understanding, you’ll be able to keep continuing doing business with a lot of people. The more you control that you have, the more that you can pay yourself. It’s a pimp-and-hoe game. I don’t care where you do it. I’m signed to myself so I’m my own pimp and my own ho’, no matter which way you look at it. But it’s not about me no more. I’ve been out 18 almost 20 years. It’s not about me. I don’t want to be hot again. It doesn’t make me no difference, I’m gonna live how I live for the rest of my life. It’s about me putting on the next generation, or stabilizing me as a CEO to put on the next group to come on. Now, that’s why you have CNN that’s coming out with an album, we got Tragedy Khadafi, we also got Royal Flush, and we’re gonna push a project soon together, us four. I also have the new generation, the Good Belt Gang, so to me that’s what it’s about. It’s about putting on the next generation and maintaining those relationships that you have with people who are not crooks, people who didn’t try to steal your publishing and your royalties. Just keep it going like that.”

“Yeah, I just wanted to live longer. It’s so many bad images of the black man doing the wrong thing and I wanted to do the opposite of that and say you know what, I’m 37 years old. I don’t have an industry age, I know these other guys got industry ages. I was signed at 17. You do the math, almost 20 years in the game. I just wanted to live longer and live for my kids. So I just jog. I’m not gonna lie, if I take off my shirt, I still look like spaghetti. I only jog, but it brings joy in my life and it brings tranquility to my life. That’s all I do. I have fun with it, and I stopped smoking cigarettes, too. I smoked for 20 years; I stopped smoking cigarettes.”

RELATED: P.A.P.I. Explains His Name Change And Odds Of A Capone-N-Noreaga Album [Interview]