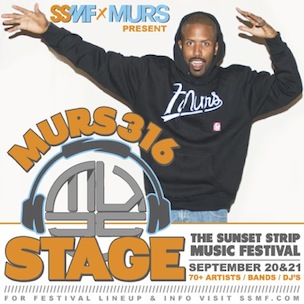 In recent years, Murs has evolved into not only an elite emcee, but also a family man and an entrepreneur. One additional label he’s taken on has been that of a curator. From regularly throwing the Paid Dues festival to speaking on Comic-Con’s Hip Hop and Comics Panel (in Adventure Time leggings), Murs has been making an effort to present Hip Hop in places it hasn’t always been welcome.

“I always feel like I represent L.A. Hip Hop,” Murs said during an exclusive August 19 appearance on HipHopDX’s DX Daily. “And not just L.A. Hip Hop, but L.A. Hip Hop in L.A. So I was able to move us up to LACMA in Wilshire into an art institution so that went really well.”

The next step finds Murs moving a few miles north of Wilshire to the infamous strip on Sunset Boulevard. He’ll curate and host the Murs 316 stage at the Sunset Strip Music Festival September 20 and 21 featuring performances from DJ Quik, Joey Fatts, A$ton Matthews and other hand-picked artists. Additional information on artists scheduled to perform, lodging and purchasing tickets is available at ssmf.com. In the meantime, here are four things we’re looking forward to seeing at the Murs 316 stage when the Sunset Strip Music Festival takes place next month.

Helping Remove The Stigma Of “The Black Rock Band”

Murs likes Rock. Perhaps some weren’t paying attention when Murs said, “I’m more Coldplay than I am Ice T,” on the 9th Wonder collaboration “The Pain,” but Murs really, really likes Rock. This is a man who formed a Punk Rock band during his tenure at Warner Bros., has done The Ghetto Is Tryna Kill Me with Sacha Jenkins and Bad Brains bassist Darryl Jenifer, and has just wrapped up a project on Strange Music with ¡Mayday! So while he enjoys the finer points of an electric guitar solo, Murs can do without the stigmas that accompany various subgenres of Rock.

“I feel like America’s still not ready for black Rock,” Murs said to HipHopDX. “We do shit, and it’s like, ‘Oh, you’re doing white shit. That’s cool.’ My fans completely tuned out to White Mandingos. I think that shit went paper, but there’s a whole black Rock movement.”

As it turns out, Murs is a fan of everyone from Suicidal Tendencies, to Death Grips, and Odd Future members The Internet.

“It was always happening, but they just never seemed to catch fire,” Murs said. “They’re still not the next it thing. They’re still a black band, and they can’t be seen as, ‘Oh, here’s a new band. Check them out. Oh, by the way, they happen to be black.’ The perception is always, ‘You’re the black Rock band.’ And there’s so many good, black Rock bands. I wish that would just disappear.”

With an opportunity to curate his own stage and scheduled appearances from Empire of the Sun, Jane’s Addiction, Cold War Kids, and more, this is a perfect opportunity for fans of Rock and Rap to enjoy their favorite acts regardless of their nationality or race.

Based on data from the 2013 census, L.A. boasts one of the country’s most diverse populations. However, all that data seems to go out of the window if you step foot in the wrong nightclub, especially if said nightclub is on the Sunset Strip.

“If you’re from a black and Latino culture, especially… We’re coming from East L.A.; we’re coming from South L.A.; we’re coming from Mid-City to cruise Sunset and the police are telling us, ‘No,’” Murs said. “In my generation it was Miyagi’s and all these clubs. Dublin’s. If you know Jay Z, ‘Peanuts in L.A./Bubblin’ in Dublin’s.’ That was a club on the Sunset Strip. And we’re not—and they used to have peanuts on the floor—but I was able to go. But you had to wear these kinds of shoes and you had to wear a button up, and you couldn’t… And then you’re liable to run into someone else from another neighborhood, and it was problems, so then you just cruise. But when you cruise, the police pull you over, and of course you’re drinking in the car and all this. So I said  ‘Wow, I can invite all my homies and our generation to Sunset and they’re going to block it off and allow us to drink and party all night? Fuck yeah!’”

So, you’ve heard it from the man himself. Here’s a chance for Angelinos to unite for the greater good of some quality music, while drinking, partying and ignoring any petty divisions.

While Murs helped bridge the gap between seemingly disparate L.A. factions like Project Blowed and N.W.A, his stage at the Sunset Strip Music Festival also provides the opportunity to showcase a new generation of Left Coast emcees. Both Joey Fatts and A$ton Matthews are slated to perform, and attendees would do well to remember an emcee’s reach is not restricted to their respective zip code.

“Southern rappers really fuck with Gangster Rap,” Murs said in a 2012 interview with DJ Quik for Maker Music. “They felt like we were talking to them. I worked with 9th Wonder, and 9th Wonder was like, ‘Kurupt, blah, blah, blah. We had a street in Winston-Salem that we called Crenshaw. Y’all were like the truth to a lot of people.’ I thought y’all were just rapping about [local] shit…I grew up in Lynwood. Compton is really the hub city. Everything radiated from that point.”

If their previous, joint interview wasn’t enough to make you a believer in the chemistry between Murs and DJ Quik, then go purchase a copy of Murs’ 2008 album Murs For President. Quik co-produced “The Science” and mixed the overwhelming majority of Murs’ foray into the major label system.

“I got to sit with him every day,” Murs said during a 2008 interview with HipHopDX. “He’s a fucking genius! And we mixed it to a two-and-a-half inch tape. It’s analog. It’s warm. Every Rap album now is mixed straight, they call it in the box—ProTools. I took my shit and put it on the shit they put Beatles records on because it’s my only chance to do it. It might not happen again. So, DJ Quik mixed the tape. It’s all nerdy shit. To me, I tell people like this. I’m a director and I got to make like Kevin Smith or somebody gets to make Clerks and then makes to big budget film. This is my time but I got one explosion, maybe.”

Murs is curating the stage, and DJ Quik is a headlining act. Expect explosions.