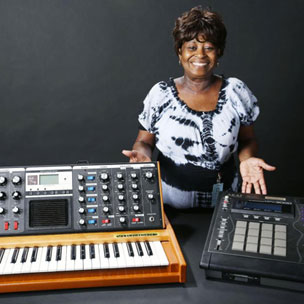 Tweets Is Watching: J Dilla's MPC Is Headed To The Smithsonian

This week, ScHoolboy Q shouts out his World Cup-winning birth country, J. Cole’s fans fill the streets to line up for his tour stop in North Carolina, and Nipsey Hussle shows his support at a rally for Trayvon Martin.

My brother brother Stuart Scott we salute with prayers and HE is what IT is all about. Fill IT w LIFE @StuartScott https://t.co/dyvAsJnzAQ

Many were touched after sports journalist and “SportsCenter” anchor Stuart Scott took the stage and accepted the Jimmy V Perseverance Award at the 2014 ESPYs. His speech displayed his will to survive, his determination to beat cancer and he inspired the audience and the viewers at home to never give up. Public Enemy’s Chuck D sent Scott a shout out on Twitter to show his support and respect for him and included a clip of the speech for his followers to see.

I touched the cup, held the cup, kissed the cup, took a selfie wit the cup!!! I meeeaan…… what is YO bucket list looking like bruh?

While many grown humans cry for it, break their backs for it, wait their whole lives for it, Rihanna gets to hold, kiss and rub the 18-carat gold World Cup trophy because she’s Rihanna. Rih has been pretty vocal about her support for every team in the World Cup. She’s watched many games and we watched along with her on Twitter. But when she got her hands on the trophy during the post-match World Cup final celebration with the German team, Rih broke FIFA guidelines because apparently only “winners of the tournaments and heads of state are allowed to handle the official World Cup trophy.” Does Rihanna look like she cares? Nah.

ScHoolboy Q Kind Of Wins The World Cup Too

BIG SHOUTOUT TO WEISBADIN GERMANY!!!!!! #ger I was born tHere

ScHoolboy Q was born in Germany, which kind of makes him a World Cup winner like Rihanna except that he didn’t get the honor of handling the cup. When Germany beat Argentina in the tournament to take home the glory, Q tweeted support for the country he was born in. In an interview from 2012, Q said that he hasn’t returned to Germany since leaving but that has changed since Q’s Oxymoron world tour earlier this year.

J. Cole has been touring on his second Dollar and a Dream tour where fans can attend his show for only $1 but the catch is that tickets cannot be purchased in advance and fans will have to line up at the venue which is announced on the day of the show. When Cole went back to his home state of North Carolina for his tour, fans flooded the area of the venue which they believed Cole would be performing at, way before Cole even tweeted out the address. Dedicated fans, indeed.

Lance Stephenson memes are one of the best sports moments-turned-into-memes of 2014. Is it too early to call that? During Game 5 of the NBA’s Eastern Conference Finals between the Miami Heat and the Indiana Pacers, Lance Stephenson was caught blowing in LeBron James’ ear. At the 2014 ESPYs, host Drake parodied the famous blowing of the ear by getting Lance on “Lance Cam,” which gave karma a shot at Lance. Drake blew into Lance’s ear. Lance took it like LeBron.

J Dilla’s MPC Is Headed To The Smithsonian

J Dilla’s contributions to Hip Hop have never gone unnoticed and now, it will be memorialized at the Smithsonian’s Museum of African American History and Culture. At the 9th annual DC Loves Dilla event, Ma Dukes and a rep from the museum announced that Jay Dee’s MPC and custom Moog will be installed to commemorate his impact on music and the culture. Dilla’s equipment is reportedly joining other cultural artifacts such as Basquiat’s brushes, Jimi Hendrix’s guitar, James Brown’s cape and Louie Armstrong’s trumpet. The Museum of African American History and Culture is set to open late 2015, early 2016.

I’m more than just an option.

Action Bronson is making his way into Toronto, Ontario, Canada and is showing respect by singing along sans the 808 drums to an empowering song about love, relationships and self-worth originally performed by Toronto’s own Drake. Not sure if it’s a requirement to sing/rap empowering Drake songs as you enter T-Dot but Bronson set the mood and kicked off a Twitter song session with his fans who RT’d him and added the ad-libs, “hey, hey, hey.”

Jay Electronica & The Act Of Deleting

Without the hashtags, “Every magic trick consists of 3 parts or acts.” This quote is taken directly from the film The Prestige, definitely recommended if you haven’t had the chance to check it out. Now, we know Jay Elect is a movie buff (his first album Act I: Eternal Sunshine (The Pledge) is set to Jon Brion’s soundtrack to the film Eternal Sunshine of the Spotless Mind) so it’s not a complete surprise that Act I and Act II have been named after the acts (The Pledge, The Turn and lastly, The Prestige) described in the film. I’m not here to make a wild theory to why Act II: Patents of Nobility (The Turn) hasn’t been released yet but the “are you watching closely” at the end of his tweet has me wondering, what is he up to next? In other words, Jay Electronica went on a massive industry-bashing Twitter rant (which were all deleted in the same day) and left me with only a few tweets to choose from.

Drake Sends Condolences In Memory Of His Fallen Fan

RIP Kennedy. So glad I got to meet you and experience your love for one day.

Back in April, friends and family members of Kennedy started the social media campaign #DrakeForKen that grew strong enough, it accomplished its ultimate goal. Drake flew out to one of his favorite cities Houston, Texas and spent an afternoon with Kennedy, who at the time was diagnosed with a form of terminal brain cancer. On top of getting Aubrey’s attention, Kennedy’s high school peers also surprised her with a unexpected prom. To see pictures of Drake’s sweet encounter with Kennedy, click here.