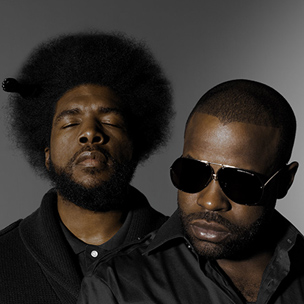 The Roots, Conceptual Death & The Freedom Of "F--k You" Money

In the summer of 2012, Chicago drill rapper Chief Keef signed a three-album deal reportedly worth $6 million. Keef’s deal was attained due to the incredible viral popularity of his violent raps and gritty, minimalist videos. Teenage and edgy, for what he lacked in lyrical ability, Young Chop’s angry and brutalist trap symphonies he rapped over sounded like the streets he rapped about. However, one lightly regarded album, eight major run-ins with the law and millions of insulting internet memes later, Keef’s greatest claim to fame may be that his cousin—rapper Blood Money—was recently murdered on Chicago’s violent streets. Thus, in light of this news, of course the Roots’ eleventh studio album is called …And Then You Shoot Your Cousin?. In so much of Rap music being tied up in a complicated mix of artists being pushed as superstars (and being allowed the spoils of success, but lacking gifts in pure talent, execution and a classic definition of excellence)—Rap music’s most beloved band released an album that basically throws the genre they’ve adored for 25 years into a casket. Once they play taps at the funeral, they bravely walk away from Rap music (quite possibly forever) with their heads held high.

In March 2009, The Roots signed on to become the house band for NBC’s Late Night with Jimmy Fallon. Creatively, this partnership has blossomed into the band being named the house band for Fallon as he assumes the role as host of The Tonight Show in February 2014. However enriching the experience of playing on late night television has been spiritually, it’s likely been ten-fold as lucrative on a financial level. In short, The Roots have reached that rarefied point of having “fuck you” money. Attaining this level of largess may actually have made them wealthier than being bothered with critical acclaim and album sales. On their past three albums, they have used this rare perch to advance a progressive notion of what Hip Hop culture must do, insofar as questioning how to live in America with a black President, how to deal with a society falling apart, and, finally, how to kill, then bury, Rap music. ?uestlove worked on the campaign to elect Barack Obama, and I think it’s entirely possible that the gravitas of aiding in the election of America’s first black President has profoundly affected The Roots’ creative process. Thus, as a 40-year old black man in America inspired to stand and deliver, hearing Rap music get lowered into the ground on …And Then You Shoot Your Cousin? must be delivered as one of the most cohesive Rap productions of the past decade—if and only because Questlove, Black Thought and company feel the newfound gravitas and importance of the demands of black American excellence.

Because The Roots are a band, I think it’s okay to call the album’s production symphonic. The dissonant drum strike that kicks off “Never” feels like Death knocking at the door, an example of just how in lock-step the producers and artists were in their creative vision. As well, because Black Thought himself told XXL this is both a satire and a concept album,” it’s okay to refer to those who contribute vocally as being in an ensemble. Thus, this is Rap as high-concept theatre, and it excels in that regard. The 11-track composition opens with the voice of Nina Simone singing the theme to 1955’ film Middle of the Night. It’s a perfect opening. The theme alludes to the idea that the sad, lonely and emotionally bereft rise in the darkness in order to discover peace. It’s an allegory to Rap, a once-proud genre now full of so many charlatans who—if they stared at themselves in the light of day—may be woefully unimpressed with who they are or what they’ve become.

Over The Roots’ last three full length releases, Black Thought has evolved from being a rapper to being a protagonist in The Roots’ story of a culture in demise. I think he also serves as one of many instruments in the band’s arsenal—hence his appearance on a scant five tracks this time around. The last three Roots albums have been “concept” albums, each being better defined as quite easily staged performances delivered in album format. Not since “Dear God” (from 2010’s How I Got Over) has there been such a clear and eloquent speech on the nature of the condition of Hip Hop culture in America’s mainstream as “When The People Cheer.” Asking, “Am I a douchebag or just another do-rag?” pretty much sums it up. We’re not in an era where we’re talking about emcees, lyricists or artists anymore. The talk is of “douchebags” and “do-rags” only. With this being the case, Black Thought gives what feels like an effortless performance here. In a manner more cold and didactic than bored and disinterested, I think he is looking for honesty from the game, but coming up empty. So, like the Rap game Othello that he now embodies, Iago has just whispered that Rap-as-Desdemona is a whore. Unable to see that Iago’s statement may be more complicated than he initially imagined, he’s content to take his own life (represented as attempting to bury Rap itself) instead of existing in a heartbroken state.

If a Shakespearean allegory feels too heavy to be believed for a Rap album, then lean in closely to the aural dynamics at play here. If Black Thought (and the always fantastic, if underrated Dice Raw and R&B vocalist Raheem Devaughn, especially) never spoke a word, the album’s minor-key dependence creating a sense of gloom of view would be crystal clear. “Never” opens with a choir that has an angelic feel, “Understand” certainly has a church organ buoyed by boom bap drums and “Dies Irae” lasts for just over a minute, but sounds like the organic answer to Kanye’s vitriolic scream from Dante’s infinite circles of hell known as “Black Skinhead.” Yes, there’s certainly a song called “The Devil,” as well as plentiful religious symbolism surrounding the nature of death. The album is dark, powerful and intentionally morose. The Roots perform here with purpose and intention as if guided by divine gift. However, they’re more than certainly aware that the genre and culture they love so much may already be headed to hell.

…And Then You Shoot Your Cousin? is what happens when you give The Roots “fuck you” money and the ability to escape the bubble of Rap while still remaining relevant in Hip Hop culture. At some point, The Roots matured into men, while clearly to them—as Questlove has recently shown in his writing for Vulture and reaction to the 2008 shooting of Sean Bell—Rap music may still be obsessed with childish things. Given these particulars—in possibly the greatest irony of all ironies—their following warrants them releasing an album that could feasibly do some business for a genre they want to kill in an industry that allowed Hip Hop culture to possibly be fatally maimed. In that being said, listen to this album 100 times. Simply put, I feel this album is a classic. If this is Rap at death’s door, then it has every right to sound this great in its final moment.