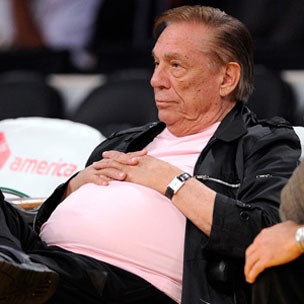 This week, Hip Hop responded to Donald Sterling being caught making racist remarks to his girlfriend (hat tip to TMZ.com) in a major way. Everyone from outspoken emcees like Killer Mike and Chuck D weighed in. But commentary also came from somewhat unexpected sources like Q-Tip and 9th Wonder. Check the rest of the week’s top tweets below.

Hasan Salaam Calls On The NFL To Change The Redskins Mascot

So now that #DonaldSterling is banned from the #NBA will the #NFL finally force the #Redskins to change their name? #racism

There has been no shortage of ink spilled on the Washington Redskins and what many consider their racially offensive logo. In the wake of Donald Sterling’s proposed lifetime ban from the NBA, Hasan Salaam hinted at redirecting some of the public’s indignation towards the nation’s capital. Interestingly enough, Republican Senator John McCain weighed in via “The Dan Patrick Show” on the matter Friday.

“I’m not sure I’d connect the two,” McCain said. “I do believe that if I were [Snyder], I would sit down with Native American leaders. I’m not the owner and he has rights of an owner, but, frankly, I would probably change the name.”

This is a lot of pressure on DocRivers who ive said is a superb human being .He has been a strong blackman who sees above race in his life..

If you’ve been following Public Enemy for the better part of the last two decades, you know Chuck D has never shied away from sharing his opinions on sports, race relations and Hip Hop. “Mista Chuck” took some not so subtle shots at Michael Jordan in regards to the Donald Sterling debacle. Chuck D praised LeBron James for his outspoken remarks against Sterling, and reminded fans of the rather non-partisan stance Jordan took on politics as a player. And when James’ Miami Heat got one step closer to eliminating the Charlotte Bobcats team Jordan owns from the NBA playoffs (a step that was highlighted by James glaring in Jordan’s direction after a breakaway dunk), Chuck D definitely noticed.

This Donald Sterling thing is what happens when race is not discussed honestly. And in America it NEVER is.

Known to be outspoken, Talib Kweli chimed in on Donald Sterling’s remarks and blamed American society for not openly having conversations on race. “This is what happens when race is not discussed honestly.” Sterling’s comments were appalling but not new to the majority of sports fans who knew his trajectory when it comes to race. It was, however, solid proof of the man’s opinions on minorities. The proof was captured in a phone tap, meaning Sterling never meant for it to be heard by the public. If it takes leaked audio tapes to open a deeper conversation about race, it only reinforces Talib’s second statement, that in America the conversation is “never” honest.

Uncle Luke Pushes For Sterling To Be Suspended For The Playoffs

Before NBA commissioner Adam Silver announced that Donald Sterling will be banned for life and have to pay a fine of $2.5 million, Uncle Luke was already thinking of possible punishments for Sterling. In his tweet, the former 2 Live Crew frontman recommended that the NBA should suspend the L.A. Clippers owner for the rest of the playoffs. Little did he know he was being too easy on the man and that the NBA would slam their fist of justice and punish way beyond the playoffs.

In the extended audio, after (now ex) girlfriend V. Stiviano asked he was aware that he employed a team of black players, Donald Sterling let her know that he was fully aware. “I support them and give them food, and clothes, and cars, and houses. Who gives it to them? Does someone else give it to them? Do I know that I have—Who makes the game? Do I make the game, or do they make the game? Is there 30 owners, that created the league?” Q-Tip’s tweet questions how many other NBA team owners share the same sentiments as Sterling. To help put race in the NBA into perspective, FiveThirtyEight provides some current statistics.

Donald Sterling is 80 years old. (Fun fact: the scandal broke on the day of his 80th birthday, April 26. Nice way to spend your birthday, huh?) Back to 9th Wonder’s tweet, it’s not about changing Sterling’s mind, his opinions have been set in stone. 9th asks angry fans to look ahead towards the future and start the change from within their circle. You can’t teach an old dog new tricks, but you can do your own part to help shape the future.

If u think banning an 80 yr old man for life is in some way a WIN for blacks people, 1. don’t speak on my behalf 2. kill ya self.

Not everyone was happy with the NBA’s punishment to Donald Sterling. Killer Mike was one of the unimpressed tweeters on sentencing day and had two things to say to those that were happy with the ban-and-fine punishment. “1. don’t speak on my behalf.” Killer Mike refused to be part of the “it’s a win” majority. “2. kill ya self.” That’s pretty much self explanatory.

Freddie Gibbs Lobbies For Magic Johnson To Buy The Clippers

Magic should buy the clippers now.

In the midst of all the angry tweets and reflectional tweets, came the tweets of who should buy the Los Angeles Clippers. Of course, many of these were tweeted before Donald Sterling received any sort of punishment. Freddie Gibbs, straight from Gary, Indiana, voted for Magic Johnson to buy the Los Angeles basketball team. Magic is most known for playing with the Los Angeles Lakers for 13 seasons but since he was the reason that Donald Sterling was upset with V, which sparked the entire fight/convo, it could be a buy for revenge. The cost of the team has been estimated to be $1 billion.

Rick Ross tweeted his interest in buying the L.A. Clippers before any cost estimates were churned out but if he’s still interested, the Clippers are being valued around $1 billion. Not much to a bawse? We’ll see. No updates have been given on Rozay’s interest but if there were complimentary wings (during games only) catered by the arena’s in-house Wingstop, then we all might have to chip in for the Clips.

Unlike Killer Mike, Ja Rule thought it was a great idea for Donald Sterling to be banned for life. Rule gave props to NBA commissioner Adam Silver, calling the ban-and-fine move, a “good move.” The reactions on Twitter spread across the board from person to person. Some agreed, some disagreed, but the large majority was disgusted by hearing Sterling say what he really thinks about minorities in general. Whether or not you think the punishment is a good idea, there is another persona who agrees with you, like Killer Mike or Ja Rule.