Our Favorite Non-Rap Artists Of 2013 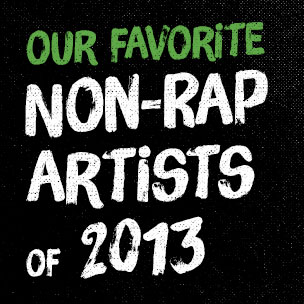 Technically, there’s no rule that says b-boys and b-girls only have to listen to Hip Hop. Early Hip Hop was powered by funk and disco breaks, the ‘90s gave us R&B-infused “New Jack Swing” and we’re in an era where Kid Cudi incorporates Haim and LCD Soundsystem into his music, while OutKast’s Big Boi is equally comfortable rocking alongside George Clinton, Too Short or Little Dragon’s Yukimi Nagano. As such, we took some time to shed light on the projects that either gave us a palette cleanse from the norm, or helped expand our musical horizons. As usual, some of these artists may have been sampled by or even collaborated with or your favorite emcees. Either way, these are the non-Rap projects we earmarked before the ball dropped on 2013.

The French masked avengers of electronic music—more casually known as Daft Punk—aren’t new to our ears, but the duo made a splash in 2013 with Random Access Memories. Formed in the early ‘90s, Guy-Manuel de Homem-Christo and Thomas Bangalter have knocked out a total of four albums and a film score. Daft Punk’s fourth and latest album paid homage to the music of the late ‘70s and ‘80s and included collaborations with veteran musicians Paul Williams and Nile Rodgers, among many others. Hip Hop’s favorite skateboarding artist and producer Pharrell Williams provided vocals on two tracks including “Get Lucky,” the album’s first single and Grammy nominee for Record of the Year, which he described as a “peachy colored” sunrise on an exotic island. If there could be an award for feel-good-slash-try-to-listen-without-smiling track of the year, “Get Lucky” would receive all honors. Daft Punk tapped into our nostalgia with Random Access Memories taking us back to happier times but still providing a look towards 2013 and beyond in the reflection of their mirrored helmets.

March 19, 2013 marked a long-awaited musical return by Justin Timberlake. After seven years since releasing his last album, Timberlake hit us with two albums and two tours. The 20/20 Experience consisted of two full-length studio albums with only two features from Jay Z and Drake and 100% production from Timbaland. It’s safe to say that Timberlake’s love affair with Hip Hop runs deep. After the first 20/20 single, “Suit & Tie” featuring Jay Z, was released, the Memphis, Tennessee native joined Hov on his Magna Carta Holy Grail hit, “Holy Grail.” If that wasn’t enough, the newly-formed besties formed the “Legends of the Summer” Tour together and sold out stadiums all over the nation. In September, The 20/20 Experience – 2 of 2 released and Timberlake embarked on another tour, “The 20/20 Experience World Tour.” Seven Grammy nominations, 100 shows and 26 songs (including bonus tracks) later, fans are mentally thanking Timberlake for taking a much-needed break from acting to fill their iPods with music they can see.

Few have the privilege of carving out their own genre in music. For Quadron, it’s hard to place them in a single space, but if you did, Quadron members Coco O and Robin Hannibal would vote for “electronic soul.” In 2013, the Danish duo brought us their second studio album, Avalanche, which holds standout singles like “Hey Love” and the Kendrick Lamar-assisted track “Better Off.” Kendrick Lamar is more than just a collaborator. He also joins the duo’s fanbase that consists of talented artists like Prince, Pharrell Williams, Jay Z and Tyler The Creator, who locked in a feature from singer Coco O on Wolf. Despite positive word of mouth, Avalanche didn’t commercially perform well on the Billboard charts but held steady in the top 10 for a few weeks on the charts in Denmark. Quadron is purely a “quality over quantity” act, as the saying goes, but there’s no doubt that the duo will continue to find success channeled through their soulful groove.

It’s not every day a 16-year-old girl from New Zealand finds herself at the top of a Billboard chart with four Grammy nominations. Lorde released her debut EP, The Love Club, in November 2012, which included her first single, “Royals,” inspired by her fascination with “royals and aristrocracy.” By 2013, “Royals” lived in every speaker and Lorde peaked at #1 on the Billboard “Hot 100” during a run of 23 consecutive weeks (and counting), making her the first New Zealand act to make it to the top as a lead artist. She even became the first solo female artist to top the Billboard Alternative Songs chart in the U.S. since Tracy Bonham in ‘96. Besides being a “Stan” for her creative counterpart Kanye West, her Hip Hop ties include Rick Ross, Troy Ave, The Weeknd and Raekwon who’ve caught the “Royals” flu turning the infectious single into their own remixes and introducing Lorde’s music to a whole new set of ears. Lorde is a 2013 example of the American Hollywood dream—not that she would care much for the title anyways.

Jhene Aiko went from singing hooks for the likes of Kendrick Lamar and Big Sean to starring in the spotlight as proved on her debut EP, Sail Out. Not that singing on songs with Kendrick Lamar and Big Sean is a bad thing. Big Sean’s single “Beware,” featuring the California songstress, received serious radio time, which spread her signature cooing to a wider market. As a Los Angeles native, Jhene has worked with major West Coast acts including Top Dawg Entertainment. It was only a matter of time before No I.D.—legendary producer and vice president of A&R at Def Jam—scooped her up and signed her to his Atrium Records imprint through Def Jam. The future is bright for Jhene, who’s already toured with Nas and Lauryn Hill, and even though her upcoming debut album could possibly feature well-known artists, we already know she can do bad all by herself.