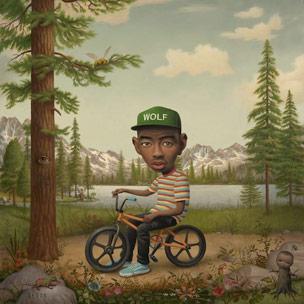 One of today’s most polarizing stars, Tyler, the Creator has maximized the Internet’s potential and taken his Odd Future brand from hanging out in Los Angeles’ Fairfax District to what has become a global sensation. Endeared and despised as a musician, emcee and rebellious miscreant, his combination of creative talent and attention seeking showmanship has kept Hip Hop debating whether he’s a passing phase with little substance. Out to extend what pessimists consider a lucky run of success, Tyler’s sophomore retail release Wolf has arrived to an audience equally stoked, skeptical and altogether curious.

No longer reliant on shock value to carry him, Tyler, the Creator has thrown a series of curveballs putting his craft first and foremost with Wolf. The album follows the story of its lead character shunned at music camp for being different (a theme reflecting Tyler’s struggle to be taken serious in Rap), ultimately winning the favor of his nemesis Sam’s girlfriend Salem. Similar to a stage play of sorts, Tyler makes songs from the perspectives of both Wolf and Sam, perhaps tying both to different parts of his bizarre artistic personality.

Greatly influenced by The Neptunes and their experimental N.E.R.D. outfit, Wolf spares nothing in paying homage. Most blatantly, the alternative “Answer” continues the long running stretch of angst towards his absentee father, while “Awkward” and the bridge between each verse on “Jamba” also give honor to his heroes. A sure highlight of his relatively short career, Tyler, the Creator snags Pharrell himself to appear on “IFHY,” an ode to a dysfunctional relationship.

Covering a wide gamut of topics, Tyler’s gift and curse is his ambition. With “48,” he strays from his narrative to tackle the negative effects of drug dealing, a worthwhile idea that he doesn’t fully flesh out. Better executions, “Pigs” explains how bullied teens turn murderous and “Colossus” is a plea for privacy when out in public, holding a mirror up to his overzealous fandom. Here he says, “I’m sick of hearing ‘bout Yonkers / I’m grateful that it worked, I attacked and I conquered.” The only overt attempt at pleasing this same rabid fan base is Wolf’s lead single “Domo23,” a conflicted sign that shows consideration for his younger crowd. At the risk of confusing these earliest adapters who once clung to violent shtick, the friendly extended interlude “Party Isn’t Over/Campfire,” “Treehome95” [featuring Coco of Quadron and Erykah Badu] and “Lone” are avant-garde moments that will impress the most serious doubters.

Using Wolf as a platform to let his imagination run wild while remaining accessible, Tyler, the Creator displays maturation on his own twisted terms. “Rusty” takes time to address social critique as he raps, “Look at that article that says my subject matter is wrong / Saying I hate gays even though Frank is on 10 of my songs…” and reminds that he’s an individual in the same verse with “These fucking rappers got stylists cause they can’t think for themselves / See they don’t have an identity, so they needed some help…” In all, Tyler is now juggling his following’s expectations with his personal growth, having transformed from a teen cult figure into a self-made visionary.