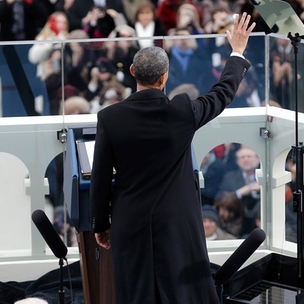 The People's Choice: A View Of Inauguration 2013 From The Ground

“Who ever thought that Hip Hop would take it this far?”

As a member of the Hip Hop generation and one of its biggest believers, I certainly didn’t see it. But even as the Notorious B.I.G. rhymed about his picture blowin’ up in The Source, and putting carats in his daughter’s ears were enough to make his 1994 dreams realized, the music itself has evolved with the times. Fast forward to 2009, Jay-Z’s sitting “black tie with the President,” using his star power and mass appeal to raise millions as a pivotal force in the campaign. For the first time in U.S. history, it seems as though Hip Hop has a symbiotic relationship with the White House. And although most rappers won’t be able to boast having President Barack Obama on their speed dial, there seems to be an unspoken open door policy thanks to the Commander-in-Chief’s re-election. Yesterday’s Inauguration ceremony really showed the idea in technicolor.

On the ground in Washington yesterday, there was a feeling of “I have to be here.” From young families with blankets, and duffle bags filled with Goldfish to hot chocolate mugs, to elderly women pausing midstep to catch their breath, righting themselves on their canes to stake out a spot to witness history, 800,000 people came to hear President Obama speak. Three things were apparent: No one was leaving until they witnessed his speech, Beyonce and Michelle Obama could earn more screams than their famous husbands, and there were snipers positioned on every building above us. As a Hip Hop fan, and a New Yorker at that, I felt pride to see Jay-Z take his seat for the ceremony, alongside diplomats and Bronx native and Supreme Court Justice Sonia Sotomayor. Although their journeys were quite different, the underlying theme of the day remained the same: Anyone from any walk of life can accomplish anything.

There were cheers and a sea of flag-waving as Obama walked out, and his face illuminated the Jumbotron. But in section D4 at the National Mall, a chant of “2Termz” resounded louder than the standard “Obama” rally cry. Hooded up with wide grins peeking through, a group of four young Black teens alternated “2Termz” with “Obeezy!” chants, and won people in the know with laughter, and even put 2 Chainz on the radar of some James Taylor fans. Just feet away, two elderly women in fur coats and hair curled to perfection beamed in silence, as though completely oblivious to the youthful reverie, eyes fixed with pride. And that common thread seemed to reside throughout the sea of diverse faces. There’s something about Barack Obama that makes him feel like the People’s President. In a social media era when all of our moves our documented with a filtered pic or co-signed with a hashtag, his supporters feel a personal responsibility for Obama’s re-election. It’s both interactive and instant, and the President has always expressed his indebtedness to the people who pulled the lever in the voting booth or circled his name on a ballot.

Whether from the crowd at the National Mall, or from the warmer confines of home, some Hip Hop fans were just as inspired for Obama’s Inauguration as his history making ceremony in 2009. Kyle Harvey of Delaware spoke on the event’s impact on the culture: “In regards to Hip Hop, the impact that the culture had on this election and Obama’s first term can’t be measured. It’s another example, maybe it’s the most important example, that using Hip Hop as a platform can effect change.”

Jonathan Reid of Los Angeles was onhand for the event in 2009, but was weary of the partying that seemed to accompany the 2013 Inaugural events: “The Inauguration was one of the most coldest days of my life. But the atmosphere was incredibly warm. You had people of all races, creeds [and] ages, coming out to celebrate the election of the first African American President. Seeing that had both positive and negative connotations on Hip Hop. There’s a feeling of empowerment that we can do this for the masses. There’s a feeling of fearlessness, but it’s also created this feeling of entitlement. This time around there were more club-shots on Instagram. But you’re supposed to be there supporting the President instead of popping bottles.”

Whether he was honored at an unofficial ball or by the resolve of those who withstood the cold for a glimpse of one of the most popular Commanders-in-Chief in U.S. History, Obama has significant meaning to those who champion him most. As E.J. White of New York City shares, they see their narrative and their potential in him: “ As a Hip Hop fan and as an African America male, Obama means everything. It doesn’t matter how you feel about his policies, the fact is you feel a way about them. I feel an investment in him because in many ways, he is a reflection of me. As far as Hip Hop goes, Jay-Z is in the White House. Think about that.”

The People’s Choice has another term to set right many of the issues that overshadowed his first administration. It’s hard to say whether gun control, gay marriage, or immigration bills will define his legacy. For his supporters on the National Mall yesterday, his defining moment will go beyond any law set in place. They’ll remember long after his second terms ends, where they were when “Yes We Can” got one more chance.

Jada Gomez-Lacayo resides in her native New York City. She is the Entertainment Editor at StyleBlazer.com, and has written for People magazine, TanningOfAmerica.com and HipHopDX.com. Follow her on Twitter @JadaGomez.