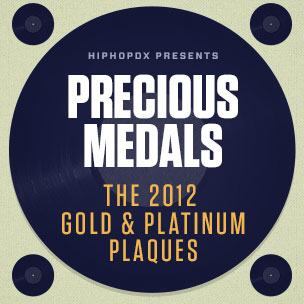 HipHopDX’s annual list of the top-selling albums and singles features some familiar trends. According to information provided by Nielsen, Americans purchased nearly 1 billion digital tracks by October of 2012. That set a pace to easily eclipse 2011’s total of 1.3 billion, and the growth trickled down to Hip Hop where newcomers like French Montana and PSY joined mainstays like Kanye West.

This year’s list includes all material released between December 20, 2011 and December 20, 2012, so Young Jeezy’s Thug Motivation 103: Hustlerz Ambition and Flo Rida’s single, “Wild Ones” both make the list despite being released in late 2011. It should also be noted that Usher and Frank Ocean both barely missed gold certification, with Nielsen SoundScan figures in the upper 400,000 range. And finally, G.O.O.D. Music’s “Clique” was rumored to be a platinum digital single, but neither Nielsen nor the R.I.A.A. would confirm it.

We present our breakdown of the artists that turned popularity into profits, featuring fan and media favorite Kendrick Lamar. Change came in the form of onetime Playaz Circle member Tity Boi renaming himself as 2 Chainz and earning his first certifications since 2007’s “Duffle Bag Boy.”

2012 Rap Albums And Singles That Went Gold And Platinum 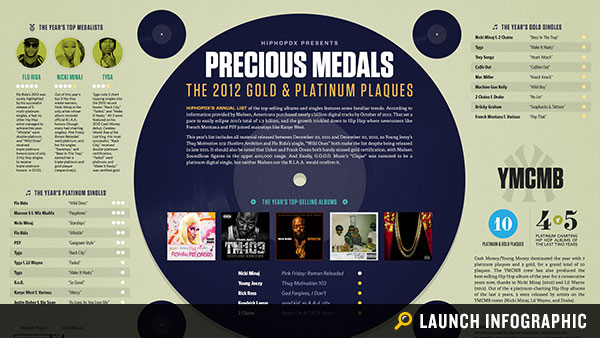